How are the gain knobs supposed to work / be used on DJ controllers / software?

I'm confused about how I'm supposed to use my gain knobs. I'm using a Gemini G4V but I mean to find out for all DJ controllers in general. 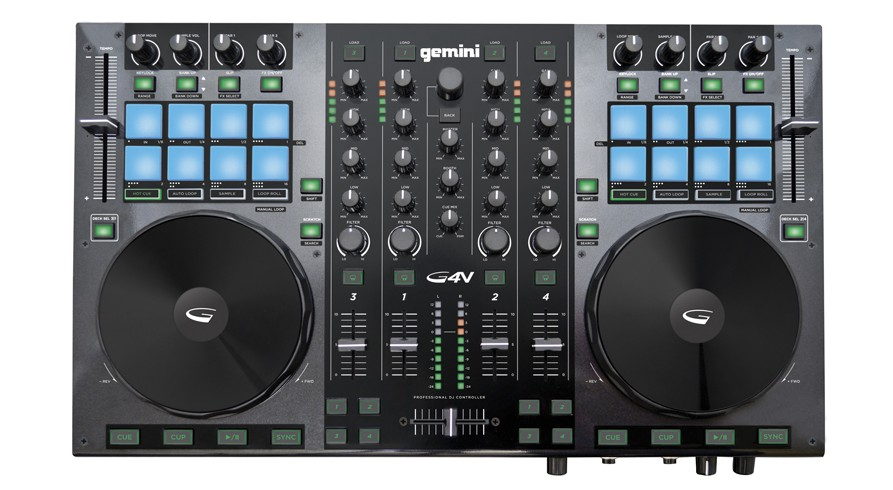 Top four knobs in the middle are gain knobs for this 4-deck mixer.

I began to research this issue thinking it was a bug, but I came across a forum post that said,

I personally love it that the gain button on my Hercules Rmx has to first be twisted to the position where the software is to engage from then on.

I remember a long time ago that this wasn't the case, it would create a "jump" in gain that would destroy people's ears (when you're playing for a large crowd with more than 2k watts this is an issue).

I mean, is that just how it is then, and with Pioneer CDJ's and Serrato, too? Professional DJ's all have to fiddle with the gain knobs before they mix in every track?

I have a hard time believing that. I thought "gain" was just supposed to be volume-for-individual-decks—so if I left Deck 2 at +2dB, why can't the next song loaded into Deck 2 also be at +2dB, and leave it to me to adjust that down if I want to?

I'd like to know how gain knobs are meant to be and / or are used in the industry.

For simplicity, here I'll use gain, loudness, and volume interchangeably, but they actually are not quite the same, and each has important distinctions. With the gain knob, nonetheless, you are effectively controlling the three of them at the same time in the same direction.

When I load a track into a deck in Virtual DJ 7.4.7 LE, the software knob resets to some value—sometimes very low, sometimes 50%—regardless where my hardware knob is.

That's the auto gain feature, which attempts to automatically match the gain (volume, amplitude) of the recently loaded song to the one that is currently playing or set as the master track (a volume master - slave relationship if you will) so both songs have the same loudness without you having to manually match them.

I don't know how tweakable the feature is in VDJ, but you must be at the very least able to turn it off.

I personally love it that the gain button on my Hercules Rmx has to first be twisted to the position where the software is to engage from then on.

I mean, is that just how it is then, and with Pioneer CDJ's and Serrato, too? Professional DJ's all have to fiddle with the gain knobs before they mix in every track?

Yes. Automatic gain matching isn't perfect. And yes, everyone (pros and amateurs) has to perform manual gain matching (even with auto gain on, since it isn't perfect!). This includes turntables, CD players, Serato, Traktor, cassetes, and everything else you can think of. Gain matching is as important in DJing as tempo, beat, and key matching (as long as you are going for seamless transitions anyway).

You will always have to make sure that all tracks match in loudness using your ears and any visual aid your system provides (like the gain LEDs) and perform tweaks accordingly. Auto gain matching attempts to remove, or at the very least easy this step, but there's no implementation (that i know of) accurate enough to remove it completely.

So, depending on your workflow and preference, auto gain can impact you positively or negatively. Experience will tell you if you want it, and when you want it.

Since you will be performing gain matching anyway (and more accurately, loudness matching), some people prefer to turn the auto gain option off and do it all manually. This way you turn that "software knob resets to some value" problem off all together, and your software and hardware gain knob will always be in sync, there will never be the need to "catch up", you always have the certainty of where the gain control actually is.

If you don't find the auto gain matching feature to be essential to your mix, try playing without it. Some people find it easier and more intuitive to play without it, and that's how it is done with most hardware mixers anyway so you might as well learn how to do it. It's very simple, just match the loudness using your headphone monitors and gain LEDs, your ears being always your primary tool. Two songs can match in their peaks, in their gain LEDs, and actually sound with different loudness. That's why you have to trust your ears above else.

I have a hard time believing that. I thought "gain" was just supposed to be volume-for-individual-decks—so if I left Deck 2 at +2dB, why can't the next song loaded into Deck 2 also be at +2dB, and leave it to me to adjust that down if I want to?

That's exactly what the auto gain feature attempts to do! It tries to set both songs at the same gain, so you control based on that normalized gain point. But if the gain knob's task was to normalize the songs to that gain, then automatic gain matching wouldn't be necessary. It'd be redundant. Also, you would only need one gain knob, a master gain knob perhaps, to which all other tracks would try to match, but we actually have one gain control for each individual channel!

This whole auto gain thing is over complicating a very simple concept, another reason some people prefer to just turn it off.

It is much simpler. The gain knob is just a volume control, like the one in your phone, tv, stereo speakers, etc, with a fancy name. That's all it is. Every channel in your mixer has one, and it is independent from one another.

I'd like to know how gain knobs are meant to be and / or are used in the industry.

Let's say you have two songs that you want to mix, let's call them A and B, and for simplicity let's assume that our master volume is set to 0dB (no reduction or amplification) and that these songs are very weird and have a constant volume. A's volume is 4dB and B's volume is 6dB.

Song B is at 6dB, so to make it as loud as song A (4dB) we need song B's volume to be changed by -2dB (6 - 2 = 4), so both songs are playing at the same loudness of 4dB. To achieve this you use the gain knob in Song B's channel, turning it to -2dB. Now both songs are at the same loudness. Notice that this is independent of each other: in this scenario Song A's channel gain knob is at 0db, and Song's B is at -2dB.

And that's all there is to the gain knob really, you want to achieve a roughly similar loudness in all channels through the independent volume control each channel provides.

But there are more volume controls in the mixer, aren't there? In addition to the gain knob, we have a volume fader per channel. What about it? Well, you don't need the gain knob, you never did, but it makes things a lot easier.

This is a very specific use of the gain knob, but it is an important audio concept in general, which here is defined as:

"Gain, a.k.a. Trim, is a volume control for each channel of a mixing console. The Gain knob controls the volume being input into the channel, not the amount of volume output through the channel. Different types of input devices, from mp3 players to guitars to vocal microphones all have different volume levels that are input into the mixing console. The job of the Gain/Trim knob is to control those levels so the faders can best control the volume output."

Not the answer you're looking for? Browse other questions tagged mixing audio dj or ask your own question.