Is it wrong to alter bar numbers after repeat endings so they reflect the performance progression rather than the last repeated measure +1?

I'm part of a small group and we have our own pieces, which I'm not allowed to share. But I'll describe the situation and hopefully get the point across. In nearly all the songs in my group's repertoire, different instruments have repeated bits at different points, which means that usually there can be no volta brackets or other repeat signs.

However, we often need to have single-staff scores at hand so that we can actually read the music while rehearsing, otherwise it's impossible due to the sheer size it gets. That said, I can either:

When you're writing the flute part all by itself in a dedicated sheet of paper, there's no reason you couldn't put volta brackets around measures 11 through 20 rather than writing them twice, even if the other instruments do not repeat said measures. Right? No need to waste many pages on music that has already been written, read and understood. So let's say I choose to go with that. Now after the flutist plays measures 11 through 20 the second time, they would actually land on measure 31 rather than 21, big picture-wise. Think communication with the other musicians, especially considering they all have different repeats themselves. Also somebody watching the rehearsal and counting the measures would have counted 30 of them so far.

So in the end what I did is, I put a little 31 over the ending volta bracket (the one that closes measure 20), effectively changing the number of the following measure, which would otherwise be 21. I tweaked it and counted from 31 on, afterwards. By folding measures 21 through 30 into the repeat since they are 11 through 20 played again, I deliberately removed those numbers from the flute score.

A more visual example would be the following picture: 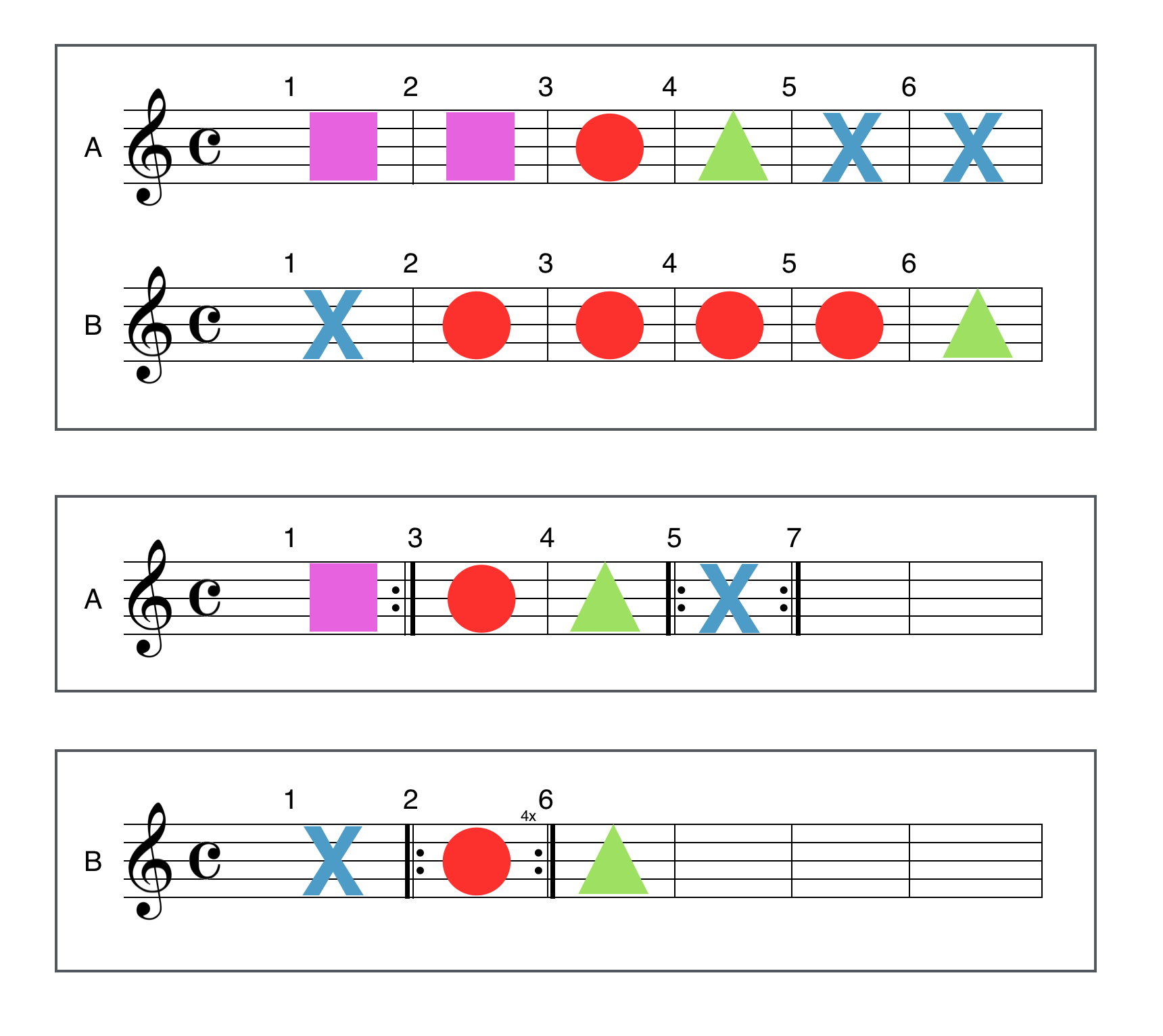 Note that the numbers are not actually printed every measure; this is just the rationale.

Is it something that should be avoided? If a pro saw this, would they feel inclined to undo everything and put the numbers as they were, leading to the need to remove the repeats altogether? I'm feeling a little insecure as I don't want my group to have poorly-organized sheet music for posterity.

As I understand bar numbers, they are intended to locate the correct position in the score, not the point in time. Note, that they often do not exist at all, and you will find rehearsal marks (squared or circled characters or numbers). I never encountered the "repetition-reflecting" numbering you propose, which has a set of drawbacks on its own: in your example "B" the player will have a hard time to arrive at bar 6, espcially if more than one bar is repeated (single bar repetition would anyway be typically represented by a bar repetition looking similar as ".//.").

So a conductor will typically state something like "We start with bar five, second repetition".

So summarized, perhaps your numbering is not wrong, but so unusual, that I would tend to avoid the necessary explanation for justifying it.

I agree with guidot, but a side discussion started in the comments that I wanted to address in a top-level reply.

The problem with "bar 5, 2nd repetition" is that bar 5 would be in a different place in every staff score when using numbers traditionally. That is, if A has a repetition of which bar 5 is a part while B does not, then the number 5 will be in different timestamps for them.

In making the parts, you should have each part be structurally identical in almost all cases. That is, you shouldn't have one part have a repeat and another not.

I can imagine an exception: you might have a piece of music with long repeated sections, where only a subset of the ensemble does something different. Maybe there's a very long "verse" with the same accompaniment but with a different melody/solo on top of it. If the length were enough to take most of a page, then it might make practical sense (from a typesetting perspective) to write the accompanying instruments with a repeat, but write out both repetitions for the melody instruments. In this case, I would recommend writing both sets of measure numbers in the accompaniment, as suggested in the question.

It sounds as if, in this case, writing 'true' bar numbers would be best. Where a bar within a repeated section has two bar numbers, indicate them as e.g. 12(24).

You must not be using a computer scoring program. This sort of independent looping is tricky to achieve, without breaking the connection between Full Score and Parts, with all the potential for error that encourages!

And only consider giving different parts different 'road maps' when there's a substantial reason, e'g' a jazz number where the rhythm section repeat the same 32-bar chorus several times, with varying solo and background arrangements in the front line. Don't do it capriciously.

As far as I remember, Guitar Techniques used nearly the same notation that you propose when they used to do songs. They had the bar number at start of each row, for example 47 51 55. And then, if the last row had a repeat, next row might start with bar 63 or 61.

I wasn't even aware some are numbering the bars as they appear on sheet not as they appear in song. "Fifth bar, second repetition" sounds quite wrong as that just depends on how the sheets are done not how the song goes. At least for a normal band it would seem quite ridiculous that the bass player would have sheets and sheets of the same notes just because the singer's part has some slight changes from verse to verse.

At each 'new' part, maybe 16 or 24 bars in, where everyone's together again, or a different theme starts, use rehearsal letters, which would be the same for everyone. Then, if you said 'let's take it from 4 bars after C',or '6 bars before J', all would start in the same place.

Notation is not right or wrong but good or bad. Its function is to convey meaning to musicians. The question is how good that notation is for that purpose, and how efficient.

You save redundancy for things like "let's start in measure 47 in the second repeat" but the question is whether this redundancy arrives at players with multiple numbers, and your principal goal is that every player may have individual repeat structures, so a decision like "ok, lets keep the repetitions in the da capo" is not possible to make.

Even without complex repeat structures, you'll need to put bar numbers (and where applicable, their ghost stacks) at the start of every repeat and at every alternate ending end at the exit.

There is a reason that generally, repeat structures are common to the whole orchestra. Particularly for drummers, there are abbreviations like bar repeats (that look like percent signs with a variable number of oblique bars in the middle) that can significantly condense repetitive material without affecting the overall repeat structure or bar numbering.

So while at surface value, your proposal may have some merit, it does come with complications particularly of having problems scaling up. There may be some cases where it appears worth the trouble, particularly in lesson books or other stuff where introducing your own conventions and benefitting from the savings covers a larger body of material under your control and you can evaluate the drawbacks and benefits specifically.

As a general practice for orchestral scores, having the same repeat (and bar numbering) structure for everyone in a manner where no extra bar numbers are required at start and end of repeats is very much the norm.

At least according to the Royal Conservatory of Music, obeying repeat signs is optional. This is supported by sources such as the 2022 RCM Piano Syllabus (https://rcmusic-kentico-cdn.s3.amazonaws.com/rcm/media/main/about%20us/rcm%20publishing/piano-syllabus-2022-edition.pdf) and https://www.olivermusicstudios.ca/RCM-Practical-Exam-Info---Piano-Levels-8---9. In fact, the 2022 RCM Piano Syllabus says this in its Page 4:

Repeat signs should ordinarily be ignored.

Repeat signs are indeed still not always followed in public and published performances of music. For example, this sheet music excerpt from the Breitkopf und Härtel edition of Beethoven's Appassionata Sonata shows the first repeat ending, for the development and recapitulation, of that sonata's 3rd movement: 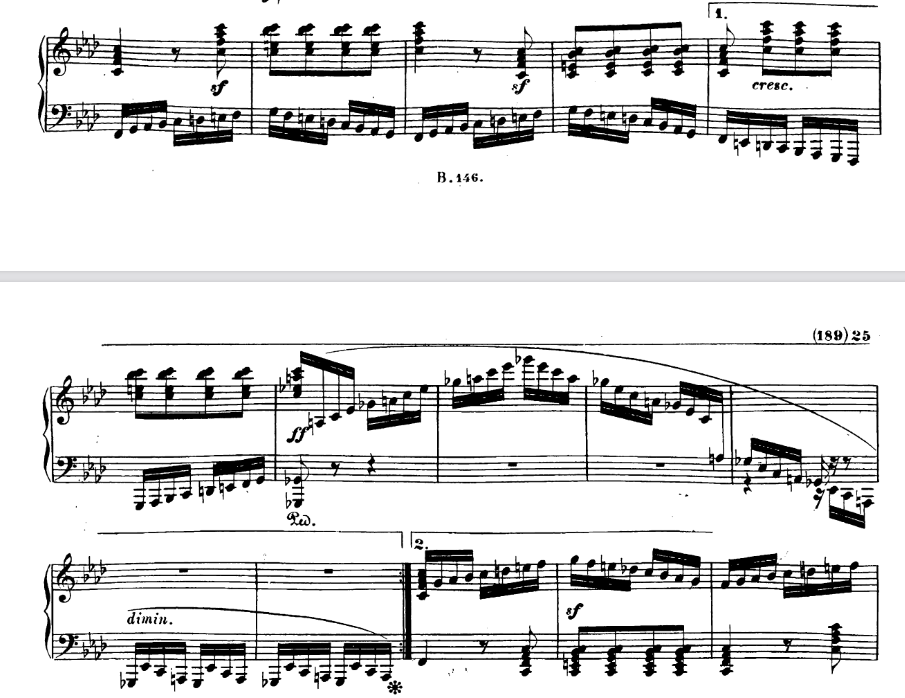 These two performances of the 3rd movement of Beethoven's Appassionata Sonata flagrantly skip that first repeat:

For another example, these sheet music excerpts of Mozart's Piano Sonata No. 16 in C Major, K.545 show the ending repeat sign, for the development and recapitulation, of that sonata's 1st movement:

These two performances flagrantly skip the repeat of the development and recapitulation of that Mozart piano sonata first movement:

The thread https://classicalmusicguide.com/viewtopic.php?t=15240 brings up even more examples of skipped repeats in published performances, including of Haydn symphony movements.

This jump measure numbering that assumes that repeats will always be followed therefore cannot be supported.

19
How can I force LilyPond to repeat a chord symbol (relates to alternate endings)?
7
Rendering second ending closing bar when followed by another repeat in LilyPond
1
Is there a way to notate alternative transitions between 2 sections of music?
4
Markup text inside second volta bracket
2
D.C. al Fine with standard repeats
3
How to mark up/edit short versions of pep band songs?
4
Where should I put the bass clef? Before or after the repeat sign?
11
When should the last ending bracket(volta) be closed and when should it be open?
1
Can't get Lilypond volta repeat to work with parallel music (multiple staves) and the \alternative construct
3
Proper use of D.C. al Coda with repeat voltas