Free resource for pitch correction on a whole track?

I have a very old recording (from about 1940) in mp3 format. The pitch of it is in a little bit bellow B♭m, and for someone who has perfect pitch it's just pain in the ears. Or if you want to jam with a recording and tuning your instrument back and forth drives you nuts.

Do you know of any free resource (preferably online) that can move the pitch of this track up or down to standard 440Hz pitch, without affecting its tempo?

Sound quality does matter, but is optional, I need it all for jamming purposes, not for production, so I just need to get this job done quickly.

Audacity can do this. It's free on Windows, Mac and Linux.

Load the audio file. Select-All (ctrl-A). Choose "change pitch" from the "effects" menu, and you will be presented with a range of options. 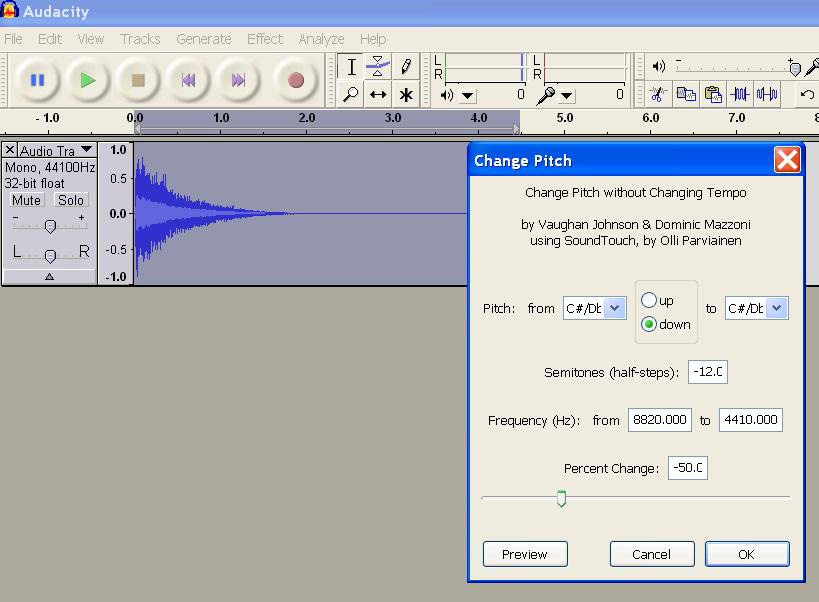 This adjusts the pitch independently of the speed, with some loss of quality. The "change speed" option in the same menu will affect both speed and pitch, but with less impact on the audio quality.

Even for those without perfect pitch, this is a great feature for people wishing to play along to recordings which are not at standard pitch.

I've removed a slightly judgemental passage, and am replacing it with this: if you acknowledge that the standard pitch is arbitrarily chosen, and teach yourself to accept other pitches, you open yourself up to a lot of recordings and live performances which you currently are unable to enjoy.

Analog equipment would be better for this. The fact that it's mp3 means that it's been compressed for a specific sample-rate; and small shifts are likely to radically increase the aliasing artifacts because your samples are going to be out-of-phase. This is going to lower the effective Nyquist limit; so you'll probably have to run it through a low-pass filter to remove the noise and you'll lose pitch detail when you do that. The whole thing will sound like you're listening through a brick wall with a paper cup.

I think you'll need to get an uncompressed version to get usable results from digital methods.

Even better would be an LP on a turntable with pitch-correction.

I'll throw one more answer in here. The original was, in all likelihood, on some sort of record. If a semitone is 16:15, and the record was designed to be played at 33⅓ RPM, playing the record around 31.26 RPM would result in a semitone difference, plus the sound quality and tempo would likely change noticeably. Not even a whole semitone would be necessary to be disturbing to a listener with or without perfect pitch. Some instruments will sound different, particularly woodwinds that are no longer playing quite in the registers of the sounding pitches. The timbre will change, possibly to be more dull, and again, the tempo will be that much slower. So, there is more to this than pitch, and it's not "just OCD" by someone with absolute pitch.

I'll echo another answer, then, and say that if you can find the original album, just speed it up to the pitch you are expecting. It will be harder to accomplish the same effect in MP3. In .wav, you could simply speed up the bit rate slightly if you have software that will do so. The Nyquist frequency would not be an issue if playback will always be at this higher bit rate. If the recording must be translated back to a standard bit rate, then yes, a low-pass filter would be necessary, but it is unlikely that you would notice a loss of quality unless you are the type that somehow notices loss of quality when going from an analog format to CD.

Not the answer you're looking for? Browse other questions tagged recording autotune or ask your own question.

32
Is there a way to develop “Perfect Pitch”?

8
Is there a formal term for a recording's pitch being “in the cracks”?
3
Tools to create drums backing track for non-drummer
2
Garageband 10 pitch correction
2
How common is to use the pitch correction (autotune) effect for vocals?