I have two questions (detailed below).

So I've been watching a Frank Vignola video course on TrueFire.com and in a song called Tranquility he uses a chord which he has labelled C6/9 (he pronounces it as a "C 6 9 chord". Below is a screen shot of the music/tab notation:

Now at first I thought it must mean a "C Dominant 6th 9th" chord because that's typically how I've seen dominant chords written (e.g. C7 is a C dominant 7th chord) and it wasn't written down as "Cmaj6/9" (which is what I would've expected).

But a quick cursory google reveals it is also known as a Cmaj6/9.

So my first first question is...

Why is it written like C6/9 when to me that confuses it with a dominant variety of chord?

Next I stumbled across the site http://www.jamplay.com/tools/guitar-chords/1-standard/3-c/4-69 which shows the C6/9 chord in different voicings. The one I was interested in (because it looked to match the one Frank Vignola had tabbed, but this one is on the 9th fret where as we're looking for the 2nd fret) was: 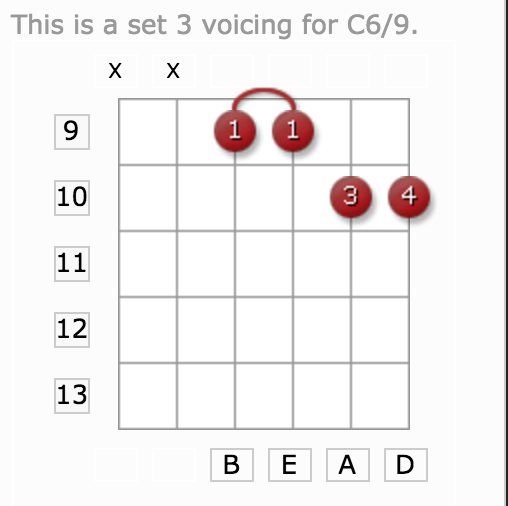 But this confused me because I've never heard of a 'set 3' voicing? It didn't look to be an inversion or a drop voicing as there is no B note in the C6/9 chord.

So my second question is...

How and/or why are jamplay playing the same 'chord shape' but on a different fret, and yet both they and Frank Vignola are able to refer to it as the same chord? (unless the 'set 3 voicing' means something hence the difference in fret placement)

When I look at the notes that are being fingered from the 2nd fret perspective it looks like a 'rootless' Cmaj6 with an added 9th (we finger: E, A, D, G).

Any help understanding this is appreciated.

I agree that C6add9 would be a better way to describe the chord. It shouldn't be confusing though: A C6 chord is defined as the major C chord with an added 6. The only other use of the slash '/' symbol is with chords that should be played with a different bass note than the root note of the chord. So for example C6/E would be a C6 chord with an E in the bass. However, /9 doesn't have any meaning in that sense, so it's not strange they came up with a way to reuse that symbol to mean 'add'. Especially since a 6/9 chord is common in Jazz and there they like to shorten notation with all those advanced chords.

I think there is a danger in getting too dogmatic or pedantic about the spelling of chords. It can close one's mind to many interesting possibilities.

Many chords can function in entirely different ways depending upon context. I recommend taking a look at the voicings used by gypsy jazz guitarist Django Reinhardt. As he was missing a couple fingers, he often only used three notes to make a chord, and the same three notes could function as various different chords depending upon the harmony at that point in the chord progression. I don't recall anyone complaining about him not hitting the "correct" chords, even though he maybe omits a flat-7 here or major/minor third there in his voicing.

You thought C6/9 might mean something else. Now you know it doesn't. Problem 1 solved?

Not quite sure what you're getting at in question 2. But yes, guitarists often leave the root of a chord to the bass player. And the notes E, A, D, G, in any order, could be the upper structure of a C6/9 chord.

1st . Dominant involves the b7 of any chord. Without that, it's not a dominant chord. Dom 9 (written such as C9) will contain 1,3,5,b7 and 9.So there isn't a dominant 6th. C6/9 is a common way it's written, and it will be spelled C,E,G,A and D - C triad with a maj6 and a maj9.Naming chords that are basically major often leaves the 'maj' bit out. A sort of default system. The chord you show has no root, which isn't a problem provided the bass or keyboard is putting that C down somewhere.

2nd. C6/9 doesn't contain a B note, so it can't be right. Just 'cos it's on the Internet shouldn't give it credence.

EDIT: 'set 3 voicing' may be his way of naming 'drop 3 voicing'. However, with drop voicing, the notes still remain as the same letter names - that can't change - but in his examples, they do. In fact, they're not even the same chord. BEAD might make Bm7add4, or E7sus4, but not C6/9.

I think "set 3 voicing" might be referring to the 3rd set of strings. I had an old jazz guitar book that talked about playing drop voicings on all three string sets, where the first set was the E, A, D, and G strings; the second set was the A, D, G, and B strings; and the third set was the D, G, B, and E strings. "Set 3" could therefore be saying that the chord is played on the highest-pitched set of strings.

And of course, as others have mentioned, I'll restate that 6/9 is an exception to normal chord naming conventions. We already have 6 for major 6th chords, and for whatever reason, we use the slash there to denote an added 9th degree. Completely unambiguous, since slash chords use letter names to mark the bass note.

14
Confused about diminished chords
3
Chord inversions?
2
Dropping the 5th degree and counting a C♯Dom7
8
Does the existence of a chord tone (and its enharmonic spellings) imply the absence of another?
12
Confused about D7 Chord notation on Alfred's Book
2
How would you calculate the name of this C/A# 7th chord?
2
About "Hybrid chord"
1
How to identify the chord progression and a specific chord
5
Do we hear bass/baritone solo melody lines as being implicitly "on top of" the accompaniment, for harmonic purposes