The same note on two staves

On rare occasions, I encounter the same note on two staves with overlapping durations. Attached is an example from an arragement of "The Long and Winding Road" by The Beatles (The note in question is the middle C). Is this a mistake, or should I act as if the duration of the first note is shorter? 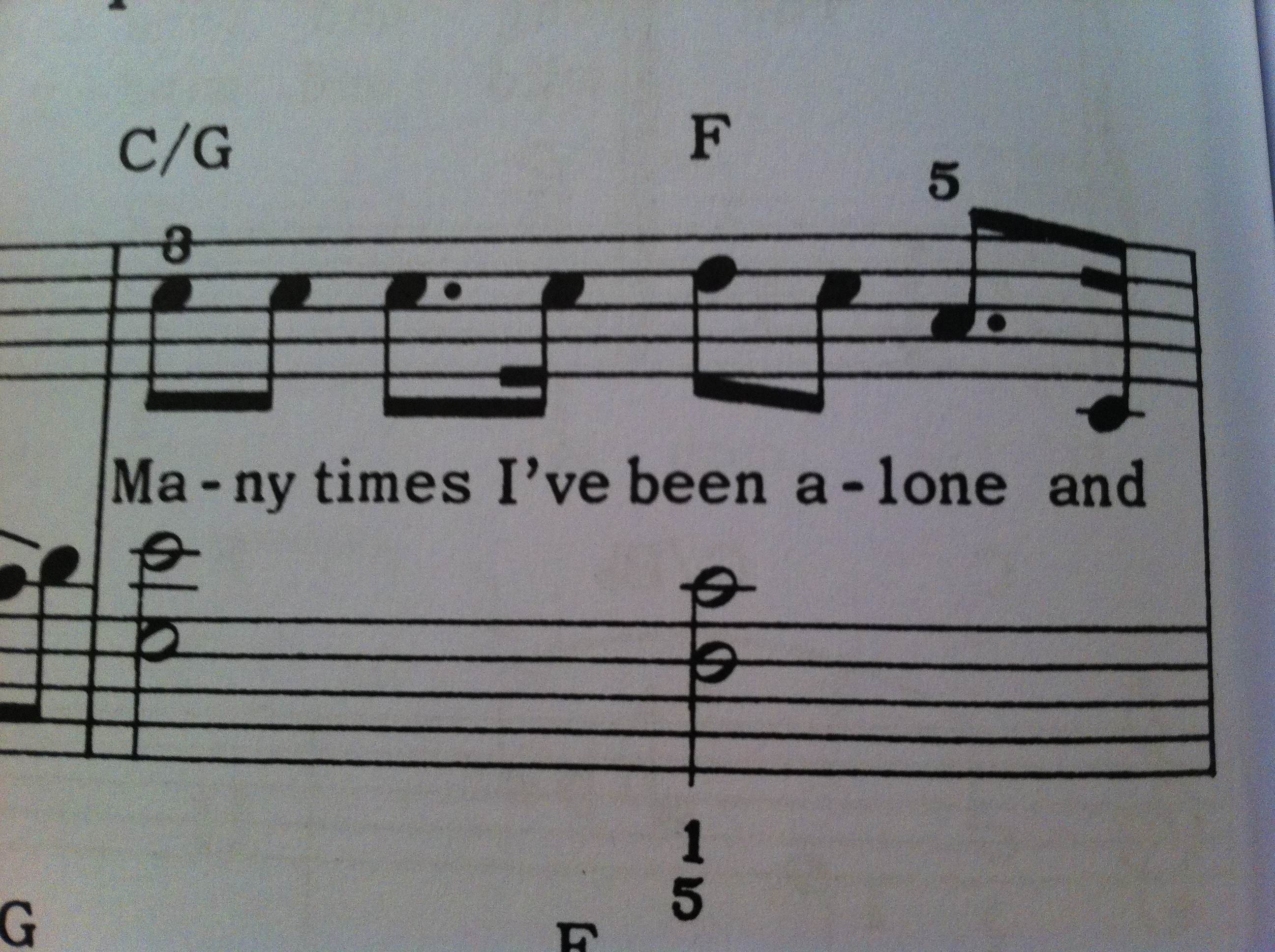 While Raskolnikov's answer is correct, I'd like to explain the theory behind this. Based on your question, you currently understand music as a collection of equal notes. That is, there are various sounds/notes/pitches that are played at the same volume at certain times. Sometimes they are on, and sometimes they are off. One is not more important than the other. This is exactly how I understood music until I hit college.

Better described, it is a collection of voices. Imagine a choir. Each person can sing one pitch at a certain volume with a certain tone quality. Music should be thought of this way. A piano piece, although played with two hands, has many voices. A simple explanation is a melody (usually the highest note) and harmony. Generally, the melody voice is played much louder than the other voices. Indeed, that note needs to sing above the other voices.

In your example above, if understood using the top explanation, obviously the last C is duplicated. However, with the second explanation, it is a useful voice. The note needs to be attacked at its unique volume, which is louder than the left hand's notes, which are the accompaniment.

The way to play it is to hold the C in your left hand and just release it to allow your right hand to play the C. The same thing is happening in Gymnopédie I by Erik Satie. After playing the initial motives in the right hand, the pianist ends on an F# in the beginning of the piece. But he keeps playing chords in the left hand of which the top note is precisely the F#. Look how it's played in this video:

In this particular example, the overlap is just a sixteenth cut off from the low stave, and the low stave note is really just part of the chord, so it is fine to just cut it a moment before the melody note comes down there, which is the important one.

I would venture to say that for this song, you aren't meant to play the melody: that stave is the notes to sing. Then the problem goes away. A singer doesn't usually want the melody to play along.

However, it looks like a fairly sparse arrangement, in which case the scriber is expecting you to play the melody too.

Although the example of "The Long and Winding Road" you cited is a popular song and (apparently) notated in Piano/Vocal/Guitar format, the same kind of 'overlapping' unisons do occur in other types of keyboard music notation as well, including classical music. The reason for the overlap is that the identical notes occur within DIFFERENT layers in the musical texture, and the visual conundrum this presents can be puzzling/problematic for keyboardists who can only play a single pitch/key as an individual sound source—i.e., there's no way to generate actual harmonic unisons (two identical notes from separate sound sources sounding simultaneously) using just the keyboard.

While at times imperfect, music notation does strive to give all the most ESSENTIAL indications of the composer's/arranger's intentions for pitch, rhythm, and dynamics. Much of the time, full durations of notes ARE indicated by their written note values, but some of the time only the attack points of certain notes are indicated and their continuing duration is understood to be carried out through use of the Damper Pedal. (And thus notation can sometimes IMPLY the proper Damper Pedaling even if the Pedaling is not marked.) Harmonic unisons such as your example illustrates are most straightforwardly achieved in Piano/Vocal/Guitar formatted music through this use of the Damper Pedal, which may or may not be specified in the score. (When not specified, use of the Damper Pedal is often assumed.)

In the example you chose the Damper Pedal will 'save' the Left Hand half note C1 until that key is restruck at the end of the bar by the Right Hand sixteenth C1, creating a legato melodic unison. Legato melodic unisons cannot occur when played solely within the hand—i.e., without the aid of the Damper Pedal or some other sustaining technique—because the key must be released, which creates a gap between the notes. The happens because, unless the Damper Pedal is already activated, a given note is immediately muted by that note's Damper falling against the vibrating string(s) whenever the key sounding it/(them) is released. (The only exception to this are the extreme treble notes where the strings are so short and taut that the notes decay very promptly anyway, and so no Dampers are needed/installed on those highest pitches.)

To perform the measure as shown you would need to release/re-apply the Damper Pedal at the F chord, holding down the Left Hand half notes until the DP captures them, then remove the Left Hand from C1 promptly so that the Right Hand can play the subsequent sixteenth note c1 free and clear of the Left Hand. As far as actual duration of the half note C1 goes, your instinct is correct: It actually gets (one sixteenth note's) less duration than a half note—because the same key is restruck before the half note ends. This reveals an interesting aspect of music notation that pertains at least some of the time: Note values are not always actual durations but they do always represent where the attack points (beginnings) of notes occur. Thus: Notation MOSTLY represents the actual sounds produced, but even when it does not it still represents INSTRUCTIONS FOR WHAT THE PLAYER SHOULD DO.

If someone were to orchestrate that same measure they could easily enough give the half note C1 to one instrument (sound source) while another instrument or a singer (a second sound source) performs the melody and sounds the sixteenth note c1 at the end of the bar, and then the two sound sources would OVERLAP and cause a momentary/true harmonic unison. But the Piano played the normal way—through its keyboard—is limited to being just ONE sound source at a time for any given pitch.

It's my understanding that Piano/Vocal/Guitar scores which include the Vocal melody in the Piano part (whether those parts are written on entirely separate staves or, as the provide example shows them, merged) are intended to be playable as solo Piano arrangements too. The P/V/G format is employed for most published sheet music of popular genres because it lends itself to the greatest possible number of common usage combinations (Vocalist and/or Guitarist [reading chords] and/or Pianist, in any assortment) that the greatest number of musicians will served by (and will therefore sell more copies due to its wider versatility).

I think this is a symptom of notation being less strict at times.
The correct thing to do as has been said is just release the note so it can be played by the other hand, but this does bring up some things to consider when reading music.

As far as notation goes some people are happy to overlap notes and assume that the performer knows to release on one voice so you can play on the other. Others will deliberately put a rest in the lower stave to make it clear. How strict the notation is depends on the composer, or the person who transcribed the sheet music. In the case of the Beatles I imagine notation is more open, and less strictly defined than some more classical pieces.

That said, there is an argument that a rest will make it look like the note is meant to be a specific length, whereas no rest/displaying the minim denotes to release as close to the note in the right hand as you can.

In the case of multiple instruments where they can both be on the same note obviously it would just be as written.

13
Same note to be played with both hands?
5
Is it a typo or how do I play it?
7
Same note in two staves
1
How to play the same note on piano?
1
Conflict of playing a note when both melody and chord require it
0
Playing multiple notes with different duration on the same key simultaneously?
0
How do I play two bass clefs sharing piano keys?
9
Chords and Intervals - Unison
6
(Piano) How should I play this harmonic unison
3
How would I play this Bach's piece (bar) on piano - from Polonaise in G major
See more linked questions