My grandson is in love with the Tuba. I wish everyone that loves that instrument could see him. He walks around air playing it all the time. He is a great big Georgia Bulldog fan and especially loves the Redcoats. I would love to buy him a youth size one, but haven't been able to locate one. Is there such a thing? If not we have been trying to figure out how to make one. Any ideas? thanks, Anita Carver

Assuming the stumbling block you are facing is the physical size of your grandson vs. a tuba or sousaphone, there's only so much you can do to reduce the standard instrument's size. Unlike string instruments, which offer smaller versions of themselves tuned the same way, wind instruments require a tube of a certain length to play the proper tone.

Tubas do come in a number of different keys, and some of these by definition will be smaller than others. The "standard" for concert band playing is "BBb" (plays the Bb harmonic series, fundamental on Bb0, reads concert key).

Additionally, tubas of a single key can vary in diameter, and by extension, overall weight and bore size. A "3/4" size instrument is the typical starter size, and is the smallest. Larger instruments are referred to as 4/4, 5/4, and even 6/4.

Sousaphones generally are all built to the same design, which is to make as much sound as possible as a marching instrument. As such, they're large, and heavy.

Now that that's out of the way,

The general wisdom is to start tuba players on the smallest instrument possible. 3/4 size BBb instruments are almost always designed for beginners, and thus will be the smallest size possible. However, this is already quite a large instrument. For this reason, many young beginners (ages 10-11) will start playing on a close cousin of the tuba: the Euphonium. 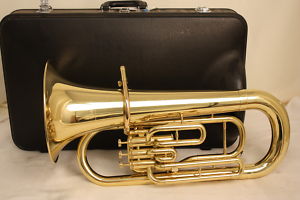 This instrument uses a mouthpiece (mostly) identical to a trombone's, and is pitched one octave higher than the tuba. It also comes in a bell-front variety, which is often confused for a baritone horn. Baritone horns are actually quite rare (the difference is in the amount of cylindrical tubing vs. conical), but that instrument has an even smaller cousin that might be an appropriate alternative if even the euphonium is too big: a tenor horn or alto horn in Eb.

If that weren't enough, there's also a tenor tuba pitched in C that's about the same size as a euphonium, and Wagner tubas which play like french horns and are oval in shape. Long story short, there are a ton of instruments out there, and if it looks like a small tuba, it probably plays like one. Brass instrument technique transfers easily from one instrument to another, so there's no harm in starting a student on a smaller instrument even if it uses a different mouthpiece and different fingerings.

A child around age 10 who has ambitions of playing the tuba should probably start on a small-bore three-valve euphonium (throw out the starting mouthpiece and get a 'small shank' Bach 6-1/2AL). If he or she is even younger and that instrument is too big, then really anything goes, all the way up to Cornet as the absolute smallest.

The Eb tuba that is smaller than BBb tuba, but it still feels like a tuba... Like NReilingh said, there are different sizes also within the key, but you can get Eb tuba quite small.

I started playing Eb tuba in a shool orchestra at the age of 10. When playing I used to have the tuba lying horisontally on my lap to reach up to the mouth piece. This worked very well for me.

The tuba I play now is also Eb tuba, but it's quite larger than the one I started with. The one I play now has an extra valve to be able to play deeper down in the registers. It also has larger (thicker) pipes.

I once tried an Eb Sousaphone that was quite small. It was actually lighter than my normal Eb tuba, as the tube didn't widen much until quite close to the bell.

Also you can get an extra small Eb Sousaphone where the mouth piece and tubes are extra small. See this article for more on this: Honey, I Shrunk the Sousaphone.

Not the answer you're looking for? Browse other questions tagged tuba sousaphone or ask your own question.

3
Sousaphone repair suggestions
4
Is "J41" a known Sousaphone model? Of which brand?
5
How to disassemble a tuba for cleaning
6
How should I think when I arrange music for tuba AND electric bass?
8
One tuba for everything: CC or F?