I was reading the wiki page on chords [en.wikipedia.org/wiki/Chord_(music)], specifically the Roman numeral notation section, and they have an example chord progression [C: vi6 ii V6 I] along with a midi file (midi). As a self test exercise, I opened up Ableton and blind recreated it to the best of my knowledge.

This is what I ended up with:

After realizing it sounded off, I imported the original midi file to compare and I was definitely incorrect. I'm wondering if someone could help me correct my mistakes, and more importantly understand where I went wrong.

Let's start with the Roman numeral, which tells you the root. Since your example is in C, this entire post will focus on C major.

The Roman numeral is thus the scale degree written in Roman numerals. This means that your chord progression of vi6 ii V6 I is based on chords whose roots are scale degrees six, two, five, and one. Your chords are thus built on A, D, G, and C.

Important to know is that uppercase Roman numerals indicate a major chord while lowercase indicates minor. (If you ever see a lowercase with a circle next to it, that means diminished.) Thus now we know the chords are A minor, D minor, G major, and C major.

So, now let's talk about the 6 that shows up occasionally; as we said, we call this "figured bass." For triads, there are only three possibilities:

With this knowledge, then, your progression should be what I give below; the lowest pitch is always given on the left. The remaining two pitches can be in any order, but the order I've given is the smoothest "answer" to this progression:

(As an explanation of your error, you may have been counting half-steps. Thus your ii6 is a minor chord built on the second half-step of the scale, C#. Similarly, your V6 is a major chord built on the fifth half-step of the scale, E. But this doesn't explain your first chord, so maybe that wasn't what you did. Or perhaps you read the vi as a iv, which is actually a really common mistake!)

To answer your question, you simply entered the wrong notes. Is this the example you were working from? The first chord is C, E, A. You entered D#, F#, A#. The next two chords are way out too, but you got the last one right!

If you want to study harmony, Ableton isn't the best tool. You need a notation-based program. Look at MuseScore. It's free! 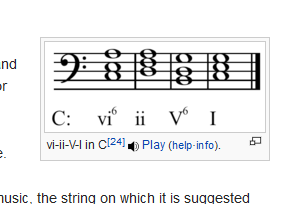 Not the answer you're looking for? Browse other questions tagged chord-theory roman-numerals or ask your own question.