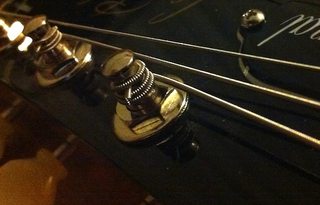 This is completely normal, the cores under the windings are nylon, just as the unwound strings. They are wound to provide a lower pitch when plucked due to an increased mass. The unwound strings need to produce a higher pitched note and are therefore left unwound.

Different brands/types of windings have different colors. Phosphor Bronze windings have a coppery color while steel or nickel will have a more silvery color.

This is used in every string set for guitars (not bass) and you have nothing to worry about. Install them on the guitar and enjoy :)

This answer adresses the edit

If it has a peg box as in the picture, that guitar is definitely a classical guitar. Also the strings are indeed metal-wound nylon-core strings, if they are easy to knot. (To see this beyond doubt, cut off a small part of the low E string and unwrap some of the metal – should be easy to do with some tweezers/pliers, and you should see the soft nylon fibre beneath.)

But I'm very certain that these are normal nylon strings – the fact that it doesn't keep tune further confirms this: yes, this is annoying, but inevitable for nylon strings (due to their much greater elasticity); you'll need to keep retuning the guitar after every hour of playing or so during the first week with new strings. After that, the guitar should then keep the tuning reasonably well (apart from temperature effects, which classical guitars are quite sensitive to).
That is, provided the guitar is still alright. I wouldn't be too sure about that: classical guitars aren't meant to have steel strings on them, and it's quite possible that the guitar has suffered permanent damage from them. In fact I'm rather surprised it has survived for 30 years this way!

Sure about the steel core? At any rate, when buying nylon string sets, three or occasionally even four strings will be wire-wound. And indeed it is pretty much exclusively one of the wound strings that gives up the ghost first. But that's not substandard but very much standard and I'd be surprised if your previous set was different.

The coloring is usually somewhat matched between the wound and the naked strings. Again, that's not unusual.

If they are for a proper classical guitar, when you tie that special knot to hold them to the bridge, you'll know if they're steel or nylon on the inner core. If you can't tie them because they're too stiff, then yes, you've got problems. However, if they tie easily and properly, then they are good for the job.

However, you labelled acoustic guitar as well. It's unusual to use nylon strings on these, and the strings will all have to have ball ends to fit to the bridge (or tailpiece). Nylon strings- wound and plain- don't have ball ends.

13
Does anyone make nylon strings for a standard acoustic guitar (non-classical)?
5
Incessant Buzzing on Third String (Classical Guitar)
16
Putting steel strings on a cheap nylon guitar
1
Replacing steel strings with nylon strings
3
Why do most electric guitar string sets include a plain steel vs. a wound G string and what are the advantages/disadvantages?
11
My Guitar came with both metal and nylon strings, what replacement strings should I buy?
3
Can I put nylon strings on my steel string acoustic guitar?
1
What are the best strings for this guitar? Steel or nylon?
0
Installing Ball-End Nylon Strings on a Classical Guitar