What is the correct way to use your left hand on a fretless bass guitar?

I just recently bought a used fretless bass ($200 for a Schecter Diamond series = can't pass up) and it is the first fretless bass I have ever owned. The neck has fret inlays & markings, so it's an easy step into the fretless world for me.

I was wondering about my left hand placement. Should I tune & play the bass so that the notes are in tune at the center of the fret or at the fret bar to the right of the fret?

The fret inlays (assuming they're vertical - those are the easiest to distinguish with) will tell you were the actual fret would be installed on the same neck. Since different types of guitars have different scale lengths, these are important to show you were the note sits on the fretboard.

Technically it wouldn't matter what you tuned your bass to, as long as it was probably intonated, those fret markers would should you were the next western musical note would lie on that particular fretboard/bass.

You do want to play by ear, yes. But you also want to be somewhat academic about it since you're starting out on fretless bass.

Check out this vector demonstration of what's going on: 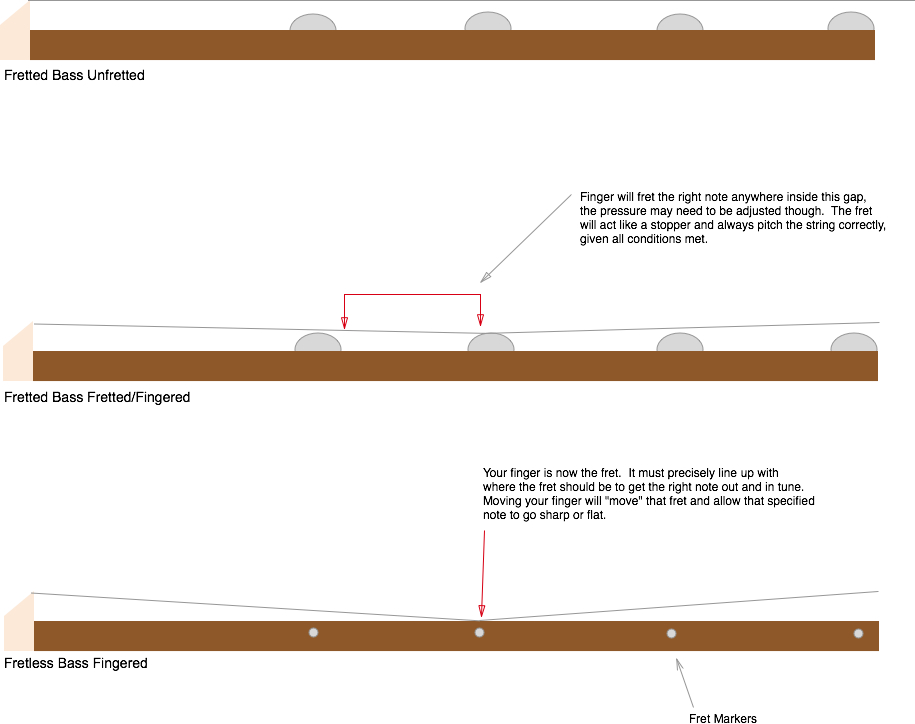 You want to "fret" the note on the fret marker as much as possible. Eventually you'll get a feel for it and your fretless playing will sound as in-tune as possible. Then, utilize that ear and squeeze notes where they should go, using the other instruments in the band for reference points (But make sure they're tuned too!)

Caveat: you may not know it, but you're probably not putting your fingers in the exact same place every time you play your bass. Your frets assist you when that happens. So don't rely on "always being in the center of the fret". And, in reality, the closer you can get to the fret (on fretted instrument), the less pressure you require to push that string down and get a good note out. And therefore, the closer your finger gets used to being where the fret is allowing it to learn that same location for fretless applications.

On a standard bass even though you put your finger in between two frets, its the fret itself that shortens the string, making the note, so you have to mimic the fret with your finger on a fretless instrument.

All bass guitars should be tuned so that the open strings center on defined tones (usually [B]EADG[C], but drop-D and other tunings are common). This is true regardless of whether the instrument is fretted or fretless.

Then, making sure you're in tune on a fretless instrument (whether that's a fretless bass guitar or a double bass) is about hearing the note you're playing more than looking at the fretboard.

If you have fretlines on your fretless bass, you will normally find yourself putting your fingers either over or just behind the fretlines to get the note in tune. This is very similar to the proper technique on a fretted bass; you place the finger just behind the fret, which allows for buzz-free notes without bending the string sharp due to overpressure. As such, it's a good place to start when learning fretless bass.

The correct way to play a fretless bass is to play by ear rather than by eye. So just tune the empty strings and then place your fingers in such a way that is sounds good. I recommend practising in darkness every once in a while†, that removes the temptation.

If you try this and then look at what you're doing, you will (provided the markings are correct) find out yourself that the fingers should be placed right on top of the fret markings, not between them as you would do on a fretted bass; so that's what you should aim at when you're forced to play by eye (for instance when you're playing live and can't hear yourself properly).

† I don't say you should do this all the time. It's not bad to use your eyes to find the right hand positions (and to notice when the hand is drifting out of position), but the fingers should be placed by feel / by ear.

Not the answer you're looking for? Browse other questions tagged technique bass-guitar fretboard or ask your own question.

2
What is the correct way to modify a bass bridge to accept thicker guage strings?
13
Learning to play bass guitar: Fretless vs Fretted
11
Electric fretless bass guitar intonation
4
What's the correct way to do tambora on guitar?
5
Getting the right sound from a left-hand percussive when playing slap bass
2
Mozart K545, what is the correct fingering for the left-hand runs starting measure 50?
0
Left hand bass technique
4
Left hand bass muting when playing the first fret
5
Would it be possible to start learning bass guitar with a fretless bass?
14
What is the best way to play a chord larger than your hand?