Opposite of a Fermata?

I'm notating a musical chant and there is a part where there is a shortened syllable. I don't think changing the time signature and/or shortening the actual rhythmic value of the note makes sense. However, I do want the overall duration of the measure containing the note in question to be shortened.

Is there a way of writing something like a fermata, but meaning to shorten the length of the note a tiny bit?

Do you wish to shorten the duration of the whole piece (take the time from the entire composition) or just shorten that syllable (leaving something of a short rest after that note)? I'd notate the first case with a changed time signature and a shortened note. For the second case, I'd probably just go for a staccato mark on the note; a shortened note followed by a rest is also possible.

What you're looking for is actually the opposite of an agogic accent. Specifically, some agogic accents slightly lengthen the measure they're in (this is the third type currently listed on Wikipedia, which states that the accent has "the effect of temporarily slowing down the tempo").

However, there is no such thing in standard (modern) musical notation. The only way to shorten a single measure is to temporarily change the time-signature and/or the tempo.

But, as a composer living in the 21st century, feel free to introduce your own ad-hoc notation. Just be sure to add a note in your score explaining what the notation means.

Alternatively, as noted in another answer, you could use the archaic form of notation that was traditionally used when notating Gregorian chants, since it appears that that's what you're notating.

Mark the quickened note(s) with accel or accelerando then mark the downbeat of the subsequent bar with a tempo.

That being said I'm guessing you are micromanaging the performance. As composer, maybe you could relax a bit; consider simply marking the section rubato and let the musicians apply their own interpretation.

I guess, the nearest match is a staccato, marked by a dot.

Typically it is assumed, however, that only half of the notated value is played, and the other half is left as rest before the next note.

As I understand your problem, you don't want the rest. In that case, I see two options:

A staccato dot would likely indicate too much of a shortening, so a tenuto bar might be appropriate.

However, if you say you are "notating musical chant" there might be some point in actually using square note chant notation for it since the comparatively free but substructured rhythmic/melodic flow of chant tends to be more aptly expressed in that manner than with "modern" notation with its more rigid timing based on subdivisions of 2.

Many choral composers use breath marks, but Daniel Pinkham (motto: "Make your scores conductor-proof!") would always write shorter note values when he wanted a breath, or an ending consonant placed before the next note. He knew from experience that if you leave it ambiguous conductors might do any number of different things and thought it was better to specify the exact amount of shortening you want.

For music in free rhythm like composed chant, though, a breath mark might be better, since the rhythm is not precise to begin with.

I just stumbled upon this and honestly think the fermata followed by a breath mark might do 2 things: 1. Confuse people. On the one hand you're telling them to play the absolute full value of the note (the fermata), but then you're telling them to breathe before a staccato note, which is kinda weird to do. The two aren't intuitive to do together. 2. Probably not get the result you are looking for. I was just thinking about how to write "Don't play the full value of the note and for classical notation I'd lean towards an eighth note tied to a sixteenth note, followed by a rest. For more simple notation, I decided to go with just a breath mark, as that is likely to achieve the desired result.

Hope that gives some insight or help.

Provided another note immediately follows, I would use a breath mark right after the note you want to shorten.

In order to breathe, the singers have to stop a tiny bit (not as much as with staccato) and, since they need to still be in time to play the next note at the intended time, they need to shorten the previous one.

This has been in insightful interaction. Thank you all very much. Apparently there isn't an "opposite of a fermata" and numerous approaches have been suggested. None of them simple. I think this speaks to the idea that it's much more common in music to stretch than shorten a note.

Since I'm not writing for musicians or conductors, but for "yogis" and others who are into chanting, this needs to be simple, and easy on the eyes. The way I have seen the chant written out previously is with a measure of 5 - nothing shortened.

What I'm liking today is a fermata over the previous note, followed by a breath mark. It's supposed to be "half a breath".

Would love some more feedback as I consider "accepting" this "solution". 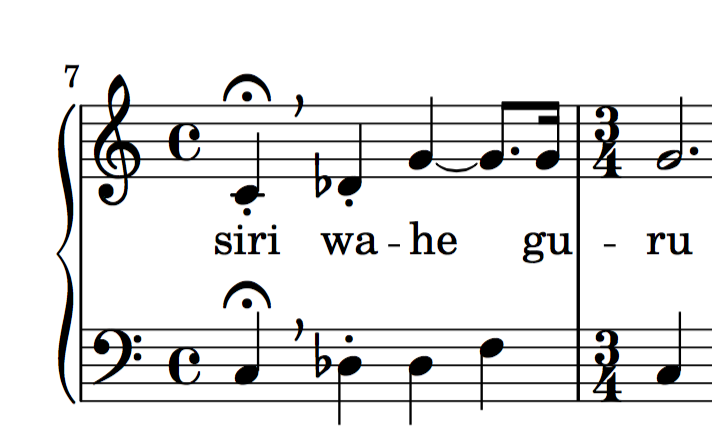 0
Articulation for shortening a note/silence

23
Relationship between 3/4 and 4/4
6
Word for part of a beat
6
Are whole notes/rests really used to signify variable lengths of time?
2
How should I distinguish between syncopation or un-metrical rhythm?
7
How to clearly notate tuplets, both "simple" and "complex," in irregular meters
6
Is there a musical difference between a work ending with a whole note and one ending with a whole note tied to an eighth?
9
Rests in pickup measure (anacrusis)
4
Percussion duration notation issue
4
How to notate syncopations in measures that starts with slashes