As you see in this picture, we have a black note on B and a quarter note on B also. 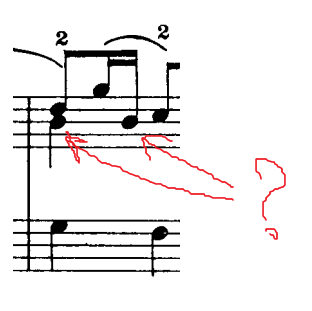 So my question is when my finger is on note B (for black note) how second B could play? I don't see a connecting legato also? If it means something else please tell me.

It depends on the instrument you play, its sustain, and on the speed and loudness you play the piece at.

Basically, you want the attack of the second B without a release of the first B. If the sustain of the instrument is strong enough and the second voice is loud enough, just smoothly releasing the G "legato" and then moving on to the C next beat may work fine, particularly on instruments or volumes with a comparatively soft attack.

Otherwise you release the B not far enough for the tone to dampen and let it strike again with a volume appropriate for the first voice.

The latter option will work particularly well on grand pianos (which tend to have a repeat mechanic that supports this kind of option) but is also feasible for pianos.

On a harpsichord, you'll also want to repeat since the attack has a very characteristic sound and its absence would be quite noticeable. On a harmonium/organ/accordion, not interrupting the B at all might be preferable.

Try it out and see which execution better allows your hearing to focus on either line without too much irritation.

14
How to play same note legato?
4
How to play a piece “cantabile”?
12
How to play these overly extended intervals on piano?
1
How would you finger this piano phrase?
2
How to play this on a piano
1
Piano: how to play (arpeggios in) music written for harpsichord
3
Why are there many types of staccato?
1
I play piano melody on the guitar. This means one string. How can I add another note so that I can at least play two or three strings