Why do guitarists put tape on their amplifiers?

I've never truly understood why so many guitarists put tape on their amplifiers.

I have seen many YouTube videos where, before recording and placing a microphone towards their amp, they will put tape in certain places across the fabric of their amplifier before recording and never explain why! What is the reason for this? I definitely know it's not because the fabric of their amplifier is damaged in anyway because their amps are perfect! The best reason that I could think of is that somehow by straining the fabric it could increase resonance?

Why do guitarists put tape on the fabric of their amplifier? (excludes to repair the fabric)

The photo below isn't the best of examples since it doesn't have a lot of tape, however, it was the best one I could find. 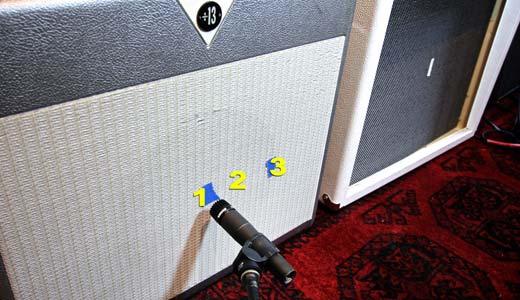 If you look closely at the picture, you'll notice that pieces of tape are placed in very specific positions: one in the middle of speaker cone and the second one on the edge of speaker cone. Furthermore, look at where microphone is positioned - it directly aims the piece of tape.

This technique is commonly used in recording - tape is used to mark microphone positions. That's because positioning microphone relative to speaker changes tone of sound that is recorded - placing microphone in the center gives brighter, more trebly sound whereas moving microphone to the edge of speaker gives warmer, more bassy sound. Once guitarist finds their "sweet spot", the easiest way to "save" it for future is to mark it using tape.

They don't usually put that tape, the sound engineer does, and he probably did at their last gig. Because the engineer microphoned the amp. Yes, they feed the actual sound the cones make into the mixer. And that tape marked the spot where the microphone was supposed to be pointed at to get a better (and hopefully feedback-free) sound.

Why do they microphone the amp and don't just feed the line-out of the amp into the mixer? The very physical structure, the shape, the materials, their weight, the size, the number, and the quality of the speaker cones "color" the sound that comes out of a guitar/bass amp. They're not meant, nor built, to emit a neutral, clean, crisp, colorless sound. That's instead what the PA system of the venue tries to accomplish. That colored sound must be fed into the mixer, and a well-placed microphone is the most effective way to do that.

Not the answer you're looking for? Browse other questions tagged guitar amplifiers recording resonance or ask your own question.

30
Why do tube-based guitar amplifiers sound so good?
1
Electric guitar problem, bad resonance?
3
How to reduce tape hiss while recording a cassette tape with digital data as source
12
Why do guitarists re-fret their guitars?
5
Types of Amplifiers
1
Electric guitar nut sticking
1
Valve/Tube Amplifiers vs. Virtual/Profiling Amplifiers
3
What is meant when a guitar amplifier does or does not "take" guitar pedals?
3
Chaining amplifiers together
13
Why do guitarists wave their guitars?