This question is quite universal and I havent found a proper answer yet. If the lowest note (bass) lasts and is still held after chord prog. change, would it affect the next chord? 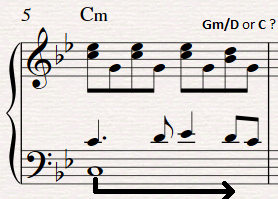 The thing about music theory is that it can be very subjective and can be analyzed on a number of different levels. There are a lot of conventions within theory on the whole, as well as conventions that are more genre specific.

This can be exemplified nicely with this question. You have analyzed the measure as having more than one chord, where those commenting and other answers are suggesting that there is just the one chord in the measure. In reality, we could say that everyone is right here, depending on your approach to analyzing things. I would tend to agree with the others that this would be best described as a single chord with non-chord tones, as that lines up more closely with the conventions of pretty much any genre.

The difference between these analytical approaches could be described as micro vs. macro, though if you are in an academic setting, you may want to be careful with those terms, as analyzing things on a macro scale could have larger implications than this specific example, such as the reductive analysis of Schenker. The concept is that we can analyze each set of individual notes and try to apply a chord to each, which would be very micro, or we could analyze groups of notes and attempt to apply a chord to each groups. When making such a choice, it is best to consider what you stand to gain from the analysis. Will it be more helpful to declare a chord each beat? Does this actually provide more information and further the understanding of the piece? Sometimes the answer will be yes and sometimes no. For instance, some Choral music will have one chord per beat and identifying them will provide you with valuable information about the way the chords are supporting the melody. Other times you will find that giving a chord name to each beat or note is actually making it more difficult to determine what the music is really doing, as it may cause you to identify chords that do not function as you would expect, such as a V chord not resolving to I and then trying to argue the reason why there is a stressed leading tone, etc.

If you were to analyze this on the micro level, there are a couple ways to think about it. The first would be to come up with a chord for each group of notes that doesn't conform to the rest of the harmony. In this case, we would be trying to label the G/Bb/D on beat 4 that you are asking about and potentially the D that appears on the upbeat of beat 2. It's a little more plain to see that this first D could be analyzed as a passing tone, as it is just one note that doesn't conform to the C minor and doesn't create a triad. If I were to label this as a chord, it would have to be a C5 add 9 (C/G/D). The G minor triad that appears over the C could be analyzed as a G minor/C (G minor with C in the bass), or we could call the C a Pedal Tone/Drone. A Pedal Tone is a note that is sustained through/against different harmonies. In such a case, we could mention the Pedal Tone's existence but wouldn't need to reference it for every chord that takes place, so in this setting we could just describe the chord as a G minor or G minor/D.

When myself and the others have chosen to call the Bb and D non-chord tones, we are considering their importance and prevalence within the measure. These notes only last for an 1/8 note and fall on a weak beat, so it doesn't make as much sense to describe them as a separate chord.

The one thing that comes to mind that may change this choice of whether or not to analyze this as a single chord is the tempo. If the piece were very, very slow, perhaps 30 bpm or slower, then it might make more sense to think of this as a G minor because it would be lasting so long, however, it would be a strange decision to have such a low bpm instead of longer note values at a faster tempo.

I think it's safe to say in this case that the entire measure should be analyzed as C minor within any normal context. As you go through and try to analyze different music over the years, you're really trying to figure out what will give you the most value in understanding the piece, or provide the most value to whoever is reviewing your analysis. If you're in an academic setting, there will be more pressure to conform to the conventions of the genre you are studying but if you have a good teacher, they should be accepting of analyses that differ from the conventions, so long as you have a good justification for your thought process and how it actually provides additional value/information to better explain the piece.

Actually, note that the C in the bass is held for the entire measure, so your comment that the bass is still held after the chord progression change is actually incorrect. There hasn't yet been a change, it's still just a C minor chord!

The D (as well as the Bf) is just a passing tone connecting the chordal third (Ef) to the root (C). Note that the upper voice of each staff plays almost the same musical line.