Air tube to change the sound of guitar

In Tokio 1992 Slash used what looks like an air tube to change the sound of his electric guitar. What is the proper name of this mechanism? And what is the mechanism behind the sound changing? 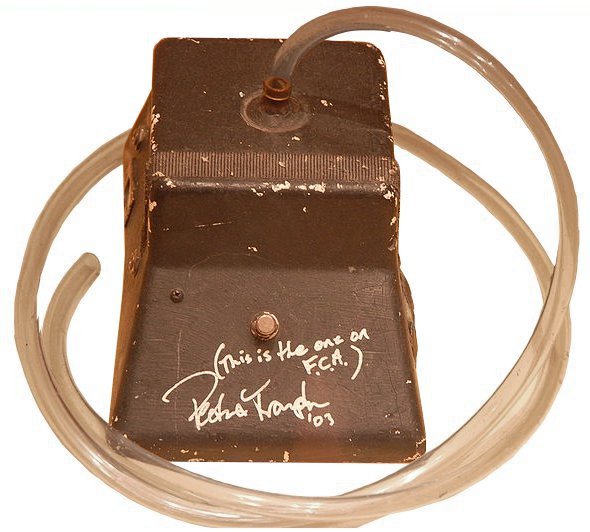 It works by projecting the sound coming from the instrument (typically a guitar) into the mouth of the performer (the tube is coupled with a speaker inside the box). The performer then modulates the sound using their mouth, pretty much as if speaking. The resulting sound is captured by a microphone.

The resulting effect is similar from that of a purely electronic vocoder (both effects apply human voice formants to pitched sound), although of course the Digital Signal Processing performed by vocoder allows for much more effects and dramatic transformation of sound than the purely acoustic talk box.

As joseem already said, it's a talk box.

The human voice can be (roughly) divided into two components: the base tone, generated by your vocals chords, and the formants, which are modulated onto the base tone using your mouth.

The talk box is literally nothing more than a tiny guitar amp with the speaker enclosed and a hose attached to the enclosure, so that the sound pressure wave is forced into the hose. You put the hose into your mouth and then the guitar acts to produce the base tone instead of your vocal chords. You can modulate that base tone normally (within the limits pointed out by joseem), and thus make the guitar "talk".

A vocoder does the same thing, but electronically. It separates the base tone from the formants from two instruments (your voice and some arbitrary second signal, typically a synthesizer) and imprints your voice's formants onto the other instrument's base tone. It sounds less "organic" than a talk box, but because it uses your actual voice as input, it can pick up formants that you just cannot produce with the external stimulus of the talk box (after all, you have a hose sticking in your mouth, so what you can do with your lips, teeth, and tongue is limited).

Not the answer you're looking for? Browse other questions tagged electric-guitar solos or ask your own question.

16
How does The Talkbox work?
1
How does a Voice Box guitar effect work?

6
What's the best choice to get more gain out of a tube amplifier
6
What is the name for the guitar that doesn't have strings?
3
Tube screamer 808 with an ENGL Screamer 50W amp
2
Making electric guitar sound like semi acoustic
3
Playing Electric Guitar using the fret hand only
10
Should you change the strings on a brand new guitar?
1
Muddy sound from guitar
3
Can you automatically transpose an electric guitar?
2
Looking for a guitar name