Does it make a meaningful change in how the drums sound is mic'ed up when the mic is outside the drum vs inside? Just for reference... 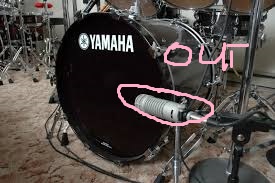 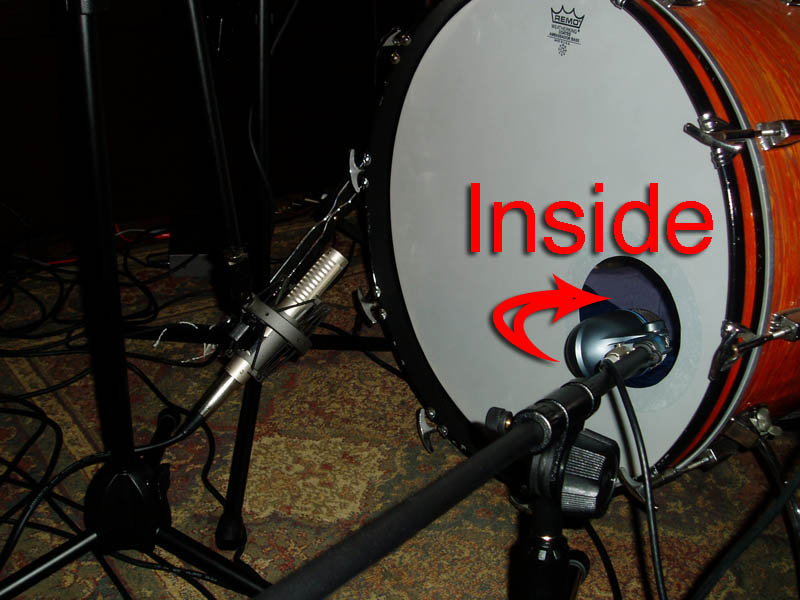 The second one is double-miked; best of both worlds.

Mic positioning is sometimes sonic preference vs convenience/resistance to cross-talk.

Live, getting the mic pointed straight at the beater inside the drum is going to give the least spill from other instruments.

In the studio, you will only need to be concerned with spill from other drums.

A mic pointed at the beater will pick up a lot of the click & snap from the head as it is struck, giving the most immediate sound. However, it can take time/distance for the waveform of the drum to fully form, so miking from a foot or more away can capture the full movement of air that the drum is capable of producing. This is the "whoomph" - the stuff that can really move the floor.

Being able to blend the two mics, paying attention to phasing & tweaking the positions until both are in complementary sweet spots, is what can distinguish an ordinary kick from a great kick.

Live, this would be just too difficult to separate from the other extraneous noise going on on stage, so unless you can glass box the drummer, it's less likely to be used.

Picture 1, btw, doesn't appear to have an air-hole in the front skin, so the engineer's gone for 'next-best' approach.

Irrelevant point of spelling/grammar/syntax... it's easier to say that the drum is miked with a mic, if for no other reason than it removes the potential confusion with rodents or computer pointing devices ;-)

Not the answer you're looking for? Browse other questions tagged drums microphones or ask your own question.

3
What pitches are marching band bass drums tuned to?
8
Drum set made from towels/pillows
7
How many sound interface inputs do I need to record drums?
19
How to choose drum pitches?
3
What is the best method to create warped drum patterns?
1
Oil in Drum wooden shells to prevent wood to dry out
0
What are the impications of Varnishing Drum Shells?
1
How many microphones does it take to record an electronic drum kit?
0
The gist of how you create varied pitched/volume realistic drum samples in JavaScript
2
Mic Placement for Live Percussive Guitar