I'd like to add a muffle notation to my music sheets for the harp. The notation is a cross with a circle inside for left hand and that plus a circle outside for both hands. Example:

There are a few more variations described here: http://www.harpspectrum.org/harpworks/composing_for_harp/images/sacred_harp_notation.gif

How can I achieve this in Lilypond?

As guidot says, it's odd this isn't already included (at least, not that any of us three can apparently find). It should be an easy fix, so you might want to mention it to them! Here's one possible workaround: 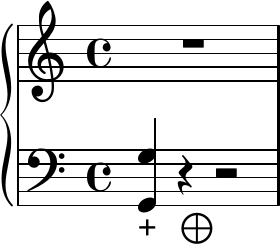 I just used a _\markup + for the first symbol. For the second symbol, I tried to find a Unicode equivalent with _\markup { \char ##x2A01 }, but this was the best I could find. (If anyone finds a better one, please let me know!)

These symbols are in the "harp techniques" section of the SMuFL specification for music fonts. See http://www.smufl.org/version/latest/range/harpTechniques.

An introduction to using the SMuFl-compliant Bravura font in Lilypond is at http://www.lilypondblog.org/2014/01/smufl-fonts-in-lilypond.

In future versions of Lilypond, using the Bravura font will probably get easier - you might want to try the "development version" 2.19 rather than the latest stable version 2.18.

Not the answer you're looking for? Browse other questions tagged notation lilypond harp or ask your own question.

8
Lilypond: How to control the paper size to create images
13
How to play these overly extended intervals on piano?
6
Key-agnostic voicing-based notation (piano)
5
Lilypond finger placement brackets
4
Vertical score positioning in LilyPond
2
What's this L symbol in piano notation called?
4
How to disable or limit compression of over-full pages in Lilypond?
1
Writing dynamics separately with Lilypond
6
Slurs with arrows for glissando-alikes in Lilypond, how to?
3
What is the best way get rhythm section notation (rhythmic notation, kicks over time, and slash notation) to display in LilyPond / Frescobaldi?