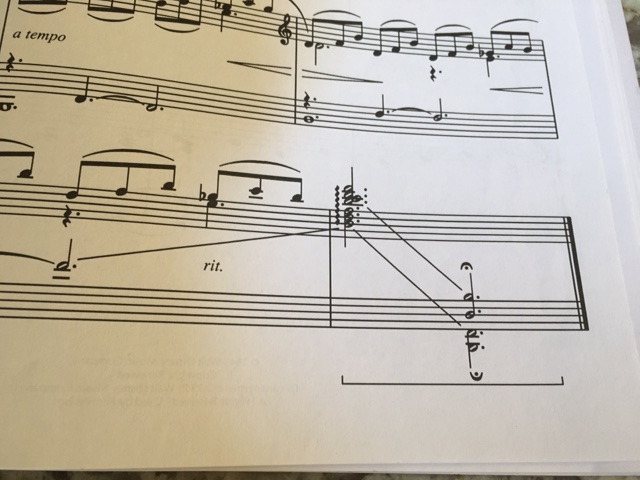 What is the proper/formal name of these solid boldfaced diagonal lines?

piano notation terminology
Share
Improve this question
edited May 18 at 2:02

As others have supposed, there is no formal name for these lines. In Elaine Gould's Behind Bars, which is the standard reference for music notation, she just refers to them as "diagonal lines":

A middle part may move between staves according to which hand plays it.... A diagonal line may trace the progression between staves.... A dotted line is most conspicuous; a solid line can look like a glissando.... (page 307)

When a voice with an independent contrapuntal line moves stave ..., it is usual to show the voice-leading with a thin diagonal line (solid or dotted) between the notes. (page 475)

These thin (not boldface) diagonal lines indicate that notes in a "voice" (not necessarily a hand) in one staff is moving to the other staff.
They are often solid, but are sometimes dashed to distinguish them from glissandi or something else. They can (and should) be avoided when beams connecting notes in each staff can be used instead.

I don't think there is formal name for these lines, but I would propose "staff changing lines", "voice following lines", or something similar.

Not the answer you're looking for? Browse other questions tagged piano notation terminology or ask your own question.

27
What does a straight line connecting notes on different clefs mean?
8
What are these diagonal dashes in the Schnabel Ed. Beethoven Sonatas?
2
Music score markings

7
Question about playing chords
6
Piano accompaniment with left or right hand
2
Workarounds for 10th intervals or larger when arranging for piano
16
Chord stretched across treble clef and bass clef
0
I don't understand this rhythm notation
6
Two different clefs at the start of a piece on the same hand
8
Music notation question - note between staves
4
How to notate a phrase than goes up and down several octaves
5
Lilypond: Putting left hand notes on treble clef - one more question