Unusual keyboard in a picture

I came across the picture which represents the piano keyboard with equally spaced black keys (as if two missing were added to ordinary keyboard).

The picture is a painting by Silvestro Lega, named Il canto di uno stornello (Wikipedia gives it as "Song of a Starling"). I do not know much about arts, so I read this artist is of XIX century (19th century), Italian.

I am quite intrigued to know - either this strange layout is simply a mistake of artist (who, perhaps, have made a sketch of a girl playing and later completed the picture "by memory") - or, given that other details of a picture are made scrupulously, it depicts some real variant of layout? Semi-mythical equal-tempered clavier? 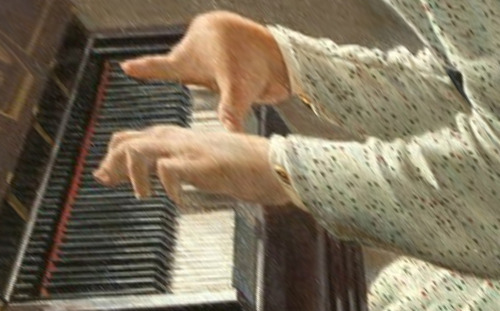 You'll see that the black keys, viewed from the front, come in alternating groups of 2 and 3 after all. Their arrangement does not correspond all that well with the lines separating the white keys, but then we are talking about a detail with very limited visibility. So I strongly lean towards this being just a bit of artistic license with regard to non-photographic reproduction. Young ladies playing the piano are a somewhat popular motif, so it's quite possible that the painter himself was neither an accomplished musician nor specialized in portraying musicians.

Pianos are quite expensive things, so it is likely that the portrait was commissioned and the lady neither a professional model nor sitting in a studio but at home in which case a good part of completing the portrait details might have been done without access to either model and piano.

Another possibility is that the coloring of the line art was done in a separate process or even a separate person, and what started out as an accurate sketch (of which the details are still somewhat apparent) was "overcorrected" into a more regular appearance of the keys.

But I think that the 3/2 pattern is still prevalent enough to make it likely we are not talking about a regularized keyboard here as that seems like the less probable of explanations.

Although user33993's answer is most likely correct, there is another possibility here: at various times in the history of music, particularly in the early stages of the development of the keyboard, people have experimented with the layout of the keys. I distinctly remember seeing pictures of a keyboard with equal numbers of white and black keys before. This was most likely in a museum, but I can't remember where or when exactly. The picture above may depict one of those early experiments. Quick googling produces this link for further reading: http://www.migo.info/music/bilinear_chromatic_keyboard.xhtml_en.html#ref22

If you look at a higher resolution image of this, https://upload.wikimedia.org/wikipedia/commons/6/67/Silvestro_Lega_-_Il_canto_di_uno_stornello_-_1868.jpg, and zoom in, it is fairly obviously an "artist's impression". For example the 6th black key (counting from the foreground of the picture) is actually located inside a white key!

Apart from the key positions, the black keys are improbably long compared with any real piano - and 19th century keyboards tended to be shorter, front to back, than modern ones. Compare with the scale drawing and the end of this page: http://www.bluebookofpianos.com/sizes.html.

At least the artist made the piano-maker's name illegible - so he probably didn't get sued for misrepresentation!

Actually, improbable "keyboard art" goes right back to the first book of keyboard music ever printed (rather than hand-copied). The keyboard shown on the title page seems to have no "black" keys at all, but they music inside certainly uses 12 different pitches per octave not 7. http://media.gettyimages.com/photos/title-page-of-parthenia-the-first-book-of-keyboard-music-for-the-in-picture-id51240333

I came across the picture which represents the piano keyboard with equally spaced black keys (as if two missing were added to ordinary keyboard).

That is an easy mistake to make: the spacing between two groups of black keys is not sufficient for putting in another black key.

If you take a look at slanted photographs of real keyboards from an angle similar as that of the painting, you'll notice that the black key gaps are decidedly less conspicuous than your idea of their spacing would tell you.

Not the answer you're looking for? Browse other questions tagged piano keyboard history or ask your own question.

5
Suggestions for switching from piano to electronic keyboard?
3
Low(est) level digital piano vs keyboard comparison
19
Origin of the asymmetrical keyboard layout of a piano
8
Locating a key on the keyboard
13
What do these unusual signs on key signature mean?
2
keyboard instrument with only some of the black keys
3
Unusual flat symbol?
2
Keyboard support