Looking for suggestions to harmonize a melody I have

I've had a melody for a while and I've slowly added some chords to it that seem to work with what I hear in my head, but I'm struggling to find a chord or two for it. Part of the problem is that the melody goes minor partway through but starts and finishes in major. Can anyone offer a suggestion for the chords in the middle? 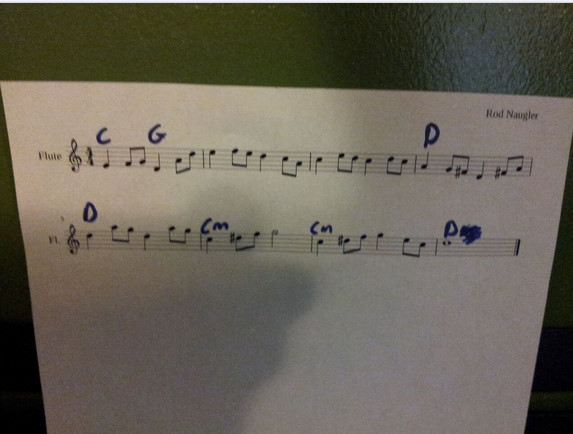 Whilst I agree broadly with Neil's suggestions, I sat down at a keyboard for 10 minutes and tried to approach the question at face value. Here's an idea:

This feels like it should resolve to G, after the final D. I was voicing the Am7 as a C - G directly below the melody, and a A in the bass. Omitting the E avoided any clash with the D# in the melody.

The first D# in bar 6 is probably an Eb, given the Cm, but the second (bar 7) would make more sense as an D#, unless you decide to analyse my Am7 as some flavour of Adim.

I made a recording to illustrate the idea:

I've taken a bit of liberty with the timing, but hopefully it's a helpful illustration, at least.

I have a different take on this. I don't mind the melody - it has direction, and it is possible to add a bass with a fair sense of direction. A certain amount of broken chord writing is fine in an instrumental melody. I've made a small change to the rhythm in m. 3 to clarify the phrasing a bit. I'm assuming flute and piano here. I won't claim a great deal of artistic merit for the accompaniment I'm presenting - it's workmanlike, and it's basically to give some idea of what can be done.

The thing here is that the theme modulates, possibly transiently. I see this as moving from C to G major to B♭ major, with the C major being introductory (as it was very easy to slip in D7 as V/V, and reinterpret ms. 2 & 3 as measures leading up to D7 in m. 4 taken as V of G major). 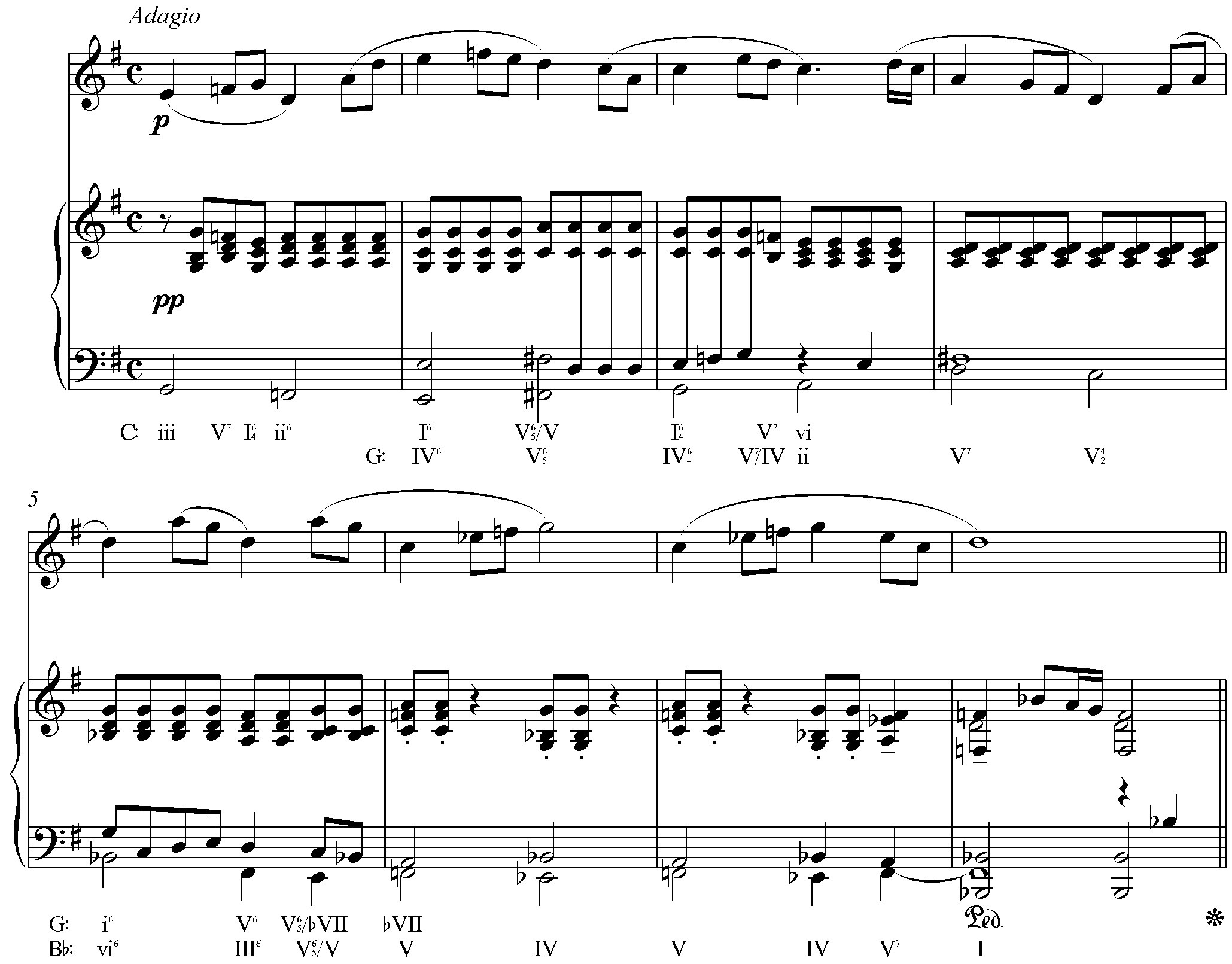 It would be correct to assume that I see the theme as being in an unsettled G major/minor (note the addition of a key signature), with references to the relative major of G minor (i.e., B♭ major) - note that the most prominent notes of the melody are G and D, even in the cadence to B♭. It would also be correct to assume that I don't see the theme as anywhere close to ending here - if I were working on this, I'd undoubtedly firm up the sense of G (while letting it continue to make suggestions of G minor/B♭ major), then take the piece fully into D major for a second theme. Because the there is a fair bit of subdominant emphasis in this opening, I would probably work through B minor to get to the second tonal area in D so as to counterbalance the subdominant-leaning harmonies, and I might even touch on B major (as a kind of "super-dominant") once I got there.

In short, I see this as the kind of theme with which you start to make a sonata.

Now, I don't have a problem with the rhythm of the melody, given that other things can be done to articulate the theme, such as rhythmic differentiation in the accompaniment, texture, tessitura, dynamics, harmonic rhythm, root movements, etc., and even the accompaniment's rhythm can be fairly constant if the rest is in play (e.g., most of late Fauré - he was sneaky good that way).

The point here is that, when you are working with an open-ended melody of slightly extended tonality of this sort, you don't really want to think about setting it in terms of chords only - everything has to work together. By all means, learn textbook harmony and counterpoint - doing exercises in these firms up your ability to make notes do what you want them to do - but bear in mind that these are only facets of what goes into a composition, that is, different planes of the same gem.

In the meantime, while you're learning textbook theory, keep trying out things like this that are at the limits of your grasp (or maybe even a bit beyond), and pound away at them until they sound right, and until you have an understanding of why they sound right. This will take years: there are still times when I go back to complete sketches after shelving them for several years, because my understanding grew enough to tackle a challenge I couldn't handle previously. What a textbook can teach you is how common problems have been handled in the past; what it can't teach you is how to make everything work together to give form and direction to an idea that is a little (or a lot) off the beaten track. You have to come to your own understanding to accomplish that.

The key of this piece is somewhat ambiguous. It starts out looking like D minor even though it does not have d minor key signature.

In the second bar, we have what looks like a, A minor chord that can function as a dominant but for some reason the leading tone is left unraised. It can be construed as the natural minor form as it is descending but for a dominant chord, you really need a raised leading tone to give clarity to the dominant function.

Then in bar three you have what looks like some sort of chord revolving around a C note, which is again not raised and does not resolve properly.

In bar 4 you for some reason now have a D Major chord.

In bar 5 You have what looks like another D chord but then you for some reason jump from a non-chordal note to a chordal note, something which makes the choice of chords unclear.

Only you and God himself really knows what chord you are in, in bar 6 you jump from a D sharp to a F and also from a C to a E. I really have no idea what is happening there.

Lastly, in bar seven you at least end on something resembling a tonic.

Not the answer you're looking for? Browse other questions tagged composition harmony or ask your own question.

21
Beatles - Because: Chord progression
4
How to compose an acoustic guitar chorus?
1
AMEB Grade 4 Theory question - harmonising cadence points in a melody?
1
Advice for figuring out unusual rhythms when composing
1
How can I tell if I have good relative pitch or if I am just familiar with scales
2
What is considered to be inspiration? How can I be sure my idea is original?
0
Choosing appropriate accompaniment chords for a waltz melody
7
Why is it common to harmonize a melody by adding chords first, rather than a bass line first?
2
What do I call this type of transition?