I'm looking to categorize a non-chord note that occurs before a chord note. The non-chord note occurs on the offbeat and the chord note can occur offbeat or on beat, it doesn't really matter. I've read a couple of sites that have mentioned unaccented appoggiaturas. Is this an appropriate term? It seems that there is a lot of contention with that term. What would be a more appropriate term?

It might be simpler to refer to 'long' and 'short' appoggiaturas.

From Grove's Dictionary of Music, 1880 (emphasis mine):

So 'short' and 'long' seem to be less contentious than 'unaccented' and 'accented'.

For a discussion on the appoggiatura see this page from Rick Wilson's historical flutes (which is where the Grove picture was taken from). 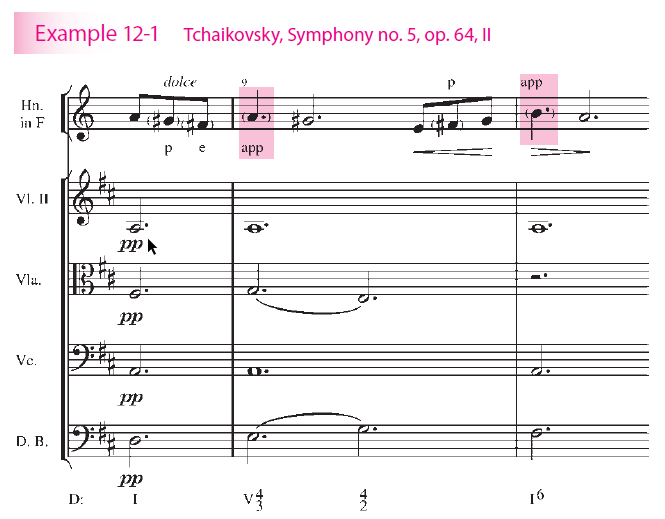 You can find various NCT cheat sheets online. This one from Toby Rush shows an un-accented appoggiatura:

...I suppose that is an artificial and unusual example, but it is un-accented.

I found another one that seems like a more realistic harmonic case... 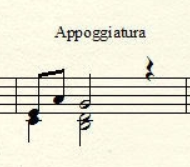 ...but I don't know the original source.

It seems that contemporary theory at least provides the terminology for an un-accented appoggiatura, and you can unambiguously write such a thing distinct from other NCTs, but it is not the norm.

FWIW, sometimes appoggiatura refers to a kind of grace note which involves a separate discussion about how to interpret the grace note. That's different that a written appoggiatura like in the Kostka example.

Not the answer you're looking for? Browse other questions tagged theory melody nonchord-tones or ask your own question.

9
Why do these two songs seem impressive yet are easy to “sing”
7
Dominant functioning as a Subdominant!
19
Use of Music Theory in Composition
10
What do you call this alternating melodic pattern?
14
When, if ever, are arpeggiated six-four chords really “real”?
3
Are these upper voices in this final passage from Handel a bona fide F7 chord or some kind of non-chord tones?
4
Notating “enharmonic” chords, e.g. iv7 vs bVI6
1
Is this melody too complicated for a first variation?
3
Is this an appoggiatura?
1
Adding interest to arpeggios