What are the applications of taking the output of an amp with a microphone?

Last Saturday I attended Skinny Living concert in Cologne, and some stage setup puzzled me. What is the purpose of taking the output of an amp with a microphone, such as on this picture? 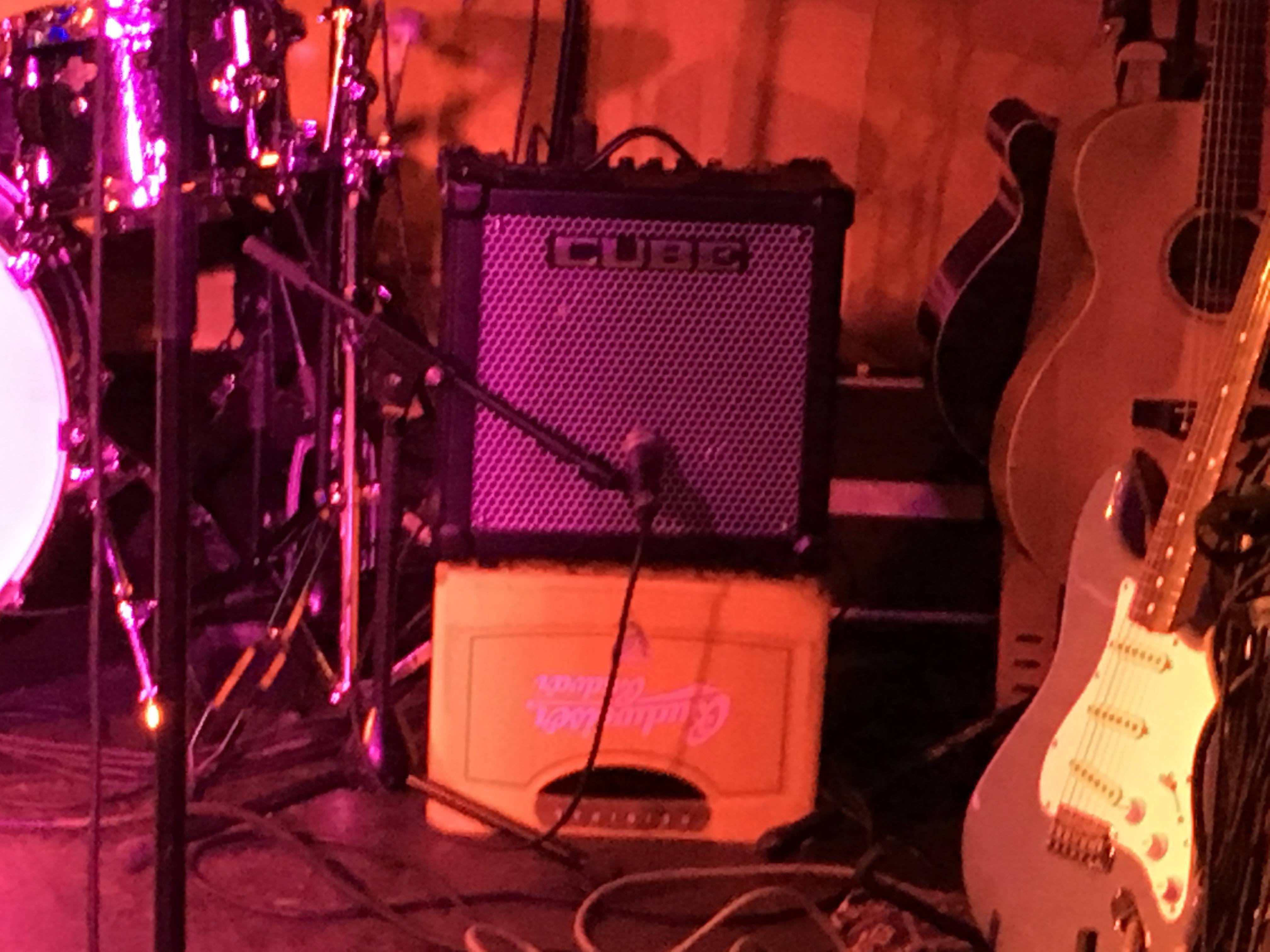 The venue is relatively small but well equipped, there were about 60-70 persons in the public and a stage of the corresponding size, if this is relevant.

This is standard procedure for electric guitars. See, a guitar amp is almost rather part of the instrument than just a loudspeaker: it critically shapes the sound. You might say the speaker cabinet is a substitute for the body of an acoustic guitar: its primary purpose may be to just get you heard, but there's a lot more than just loudness to the art of building well-sounding guitars. You want to boost a wide range of frequencies, but some more and some less†.

So, you get a very different result if you just plug the guitar into the PA, compared to the “proper” amp sound that's usually desired. Of course, if the amp is loud enough to get to all the audience then you don't need a PA at all for guitar – but such a loud amp can be quite a pain for the other performers on stage. It also isn't great for overall band sound because it bleeds in the vocal mics etc.. And for bigger venues, even a couple of Marshall stacks may not be able to get the guitar sound satisfyingly to the back rows. Modern PAs are much more effective at this.

Hence it's usually better to have only a relatively quiet guitar amp (merely loud enough so everybody on stage can hear it enough, particularly the guitarist herself) but use a mic to bring its sound to the audience too, much like you could use a mic to bring the sound of an acoustic guitar to the audience. (Just, because even a quiet amp is much louder than an acoustic guitar, it's much easier to actually get it heard well.)

†Most electric-guitar cabinets are strong in the midrange (with different scoops and peaks), which is good for a powerful presence in the mix, but they cut off the high treble range rather strongly. This is particularly important for the distorted sounds typical of rock/metal guitar; those would be really annoying if you played directly into the PA.

There are many electrical advantages to "air-gapping" the PA from the backline. You avoid ground loops and other kinds of issues that arise from connecting equipment directly. Even more important, changing from one band to another is much easier when you just move the mic out of the way, let the guitarist/tech set up the back line, and then place the mic. No impedance matching, ground lifting, adapter cable finding, or other annoying tasks required.

I suppose this isn't as true as it once was, but for many amplifiers, you have no choice but to put a mic in front of them! Classic all-tube amps almost never had any kind of output that could be run to a mixer. Modern tube amps and of course digital modeling amps can often have "recording outs" or "main outs" that can be run to a mixer, but they usually sound pretty lame at best.

Also the microphone is an extension of the PA system, which is kind of like an instrument played by the FOH engineer. As an engineer, it helps a lot to get to know a set of mics really well, and then use those mics in ways such that you can control the sound coming into the mixer with great detail - like getting familiar with a certain guitar. Using the same mic for all the guitar amps that you see from different bands helps put a similar sonic stamp on the electric guitar sound, which really helps make mixing decisions quickly.

I greatly prefer a stage setup where everything is miked and nothing is on a DI. Usually keyboard players do not bring an amp, and I suppose that for a lot of gigs, a DI from the bass head is best if you can get it, but there is always that annoying part of figuring out how to plug the bass DI in.

This looks like an guitar amplifier. The amplifier is a key part of the sound of an electric guitar. If you want to capture that sound, you need to mic the amp, rather than using a DI.

I believe you can get amp modelling pedals, but I've mostly seen microphone setups like your picture.

A counterexample would be a keyboard amp. The amp here is usually not part of the desired sound, so we bypass it with a DI. Note that this is not true for some keyboard sounds (organ with Leslie, some electric pianos like Rhodes and Wurlitzers).

8
Why acoustic-guitar often use direct output instead of amp miking while on-stage?