Sheet music: same note, back to back?

How should one interpret the notes shown in red? 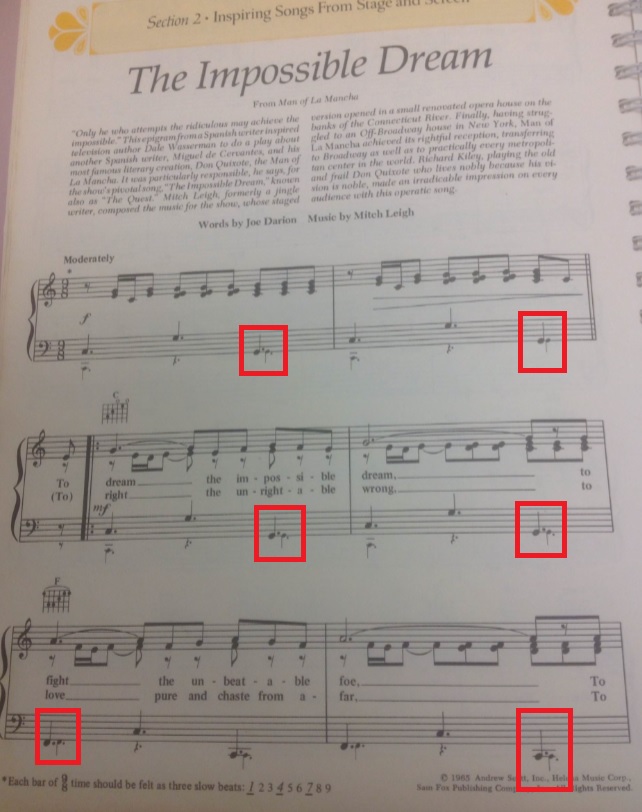 "Man of La Mancha" is a musical theatre show by Mitch Leigh. What you have here works loosely as a piano extract if you are doing corepetition with a singer but can be filled in with additional instruments characteristic for the performance.

For that purpose, there are guitar diagrams above the score. There also is a two-voice arrangement of vocals. If you have two singers, you'll probably ultimately leave out the singing passages from the right hand completely. With one singer, you'll probably play both singing voices (as two-voice harmony between piano and singer works rather badly) or let another instrument like clarinet or violin fill in the second voice or just do some sound texture based on the guitar chord.

The small voice in the bass is obviously for the case where you actually have a bass instrument available. If you are playing some sort of organ, you'll play this in the pedal. If you have a double bass or a bass guitar or a tuba, that is what it will be playing.

It's likely a characteristic voice from the original piece, so when you expand the execution beyond "just piano", you'll give it to a suitable bass instrument when available. Even when only playing piano, you might want to think about giving it some representation, but the default suggested execution are the strongly written notes. Maybe because the typical piano will drone a bit over the singer when playing the lower notes here. Many other bass instruments have a clearer tone quality.

Basically this is a musical theatre score intended to work for more than just piano when available. It still depends on some orchestration skills of whoever ensemble is going to work with this score, but there are some sketches for how it could be done.

If one plays well, one can put in the two parts written for left hand - tails up, and tails down. That gives an octave sound for some of the first bass notes. Since they're written out as two separate parts, the doubled up notes need to be written in,along with appropriate rests, to make their timing correct. So, either play the tails up notes, or the tails down notes, or both. Any of those will sound fine, and doubling bass notes, even when they are not written in, is a very old piano players trick.

The lower notes look smaller to me, almost like cue notes.

It is possible that they are a simpler bassline, which could be played by a less advanced player. I would expect that to be mentioned in the book somewhere, perhaps in the introduction. If this is the case, I'd ignore the smaller notes altogether. That being said, the doubled octaves are hardly going to sound bad.

If it was trying to represent separate voices, I'd expect the noteheads to overlap. So I'd discount that possibility.

Regardless, the notation is quite unconventional.

3
Question about “The Place I'll Return to Someday” music sheet
4
What to do when you don't trust the sheet music (or guitar tab)?
4
Reading music - Ballade No.1 in G minor opus 23
7
What do different value notes on the same line mean?
7
Bwv 639 Bach/Busoni note length and symbols
0
How do you interpret this in sheet music?
1
How do I read this piano sheet music?
10
Sheet music time signature question
1
Reading piano music sheet for left hand play