I know that the Baritone is different from the Euphonium because it has a narrower bore and sharper taper, esp. in British bands, but my question is are there precise measurements that define whether a horn is a baritone or a euphonium, or is it at the manufacturer's discretion?

I have strong reason to believe alephzero is correct and LaurencePayne is wrong. Wikipedia backs up what I remember from my wind ensemble days:

The fact that they look similar externally does not make them the same, any more than a trumpet and a cornet are. The shape of an instrument's bore is critical -- look at the sound difference between a clarinet and a saxophone. It's not the material. I've played metal clarinets; they sound like any other clarinet. Bird played a plastic alto on occasion; it sounded sorta like a brass sax.

Also, baritones usually have only the "basic" three valves common to all brass instruments, but euphoniums usually have four, or sometimes even five.

Conceptually, a baritone is a (very) large flugelhorn, while a euphonium is a small tuba - hence the differences in design.

Both Laurence user 19146 are incorrect.

both baritones and euphoniums are available in 3-, 4- and 5 valve variants, both can be compensated or not, and both are seen with and without triggers.

To my knowledge, the "average" bore size of the euphonium and baritone are roughly the same, which is also why they are nearly fully interchangeable (and the source of the confusion). 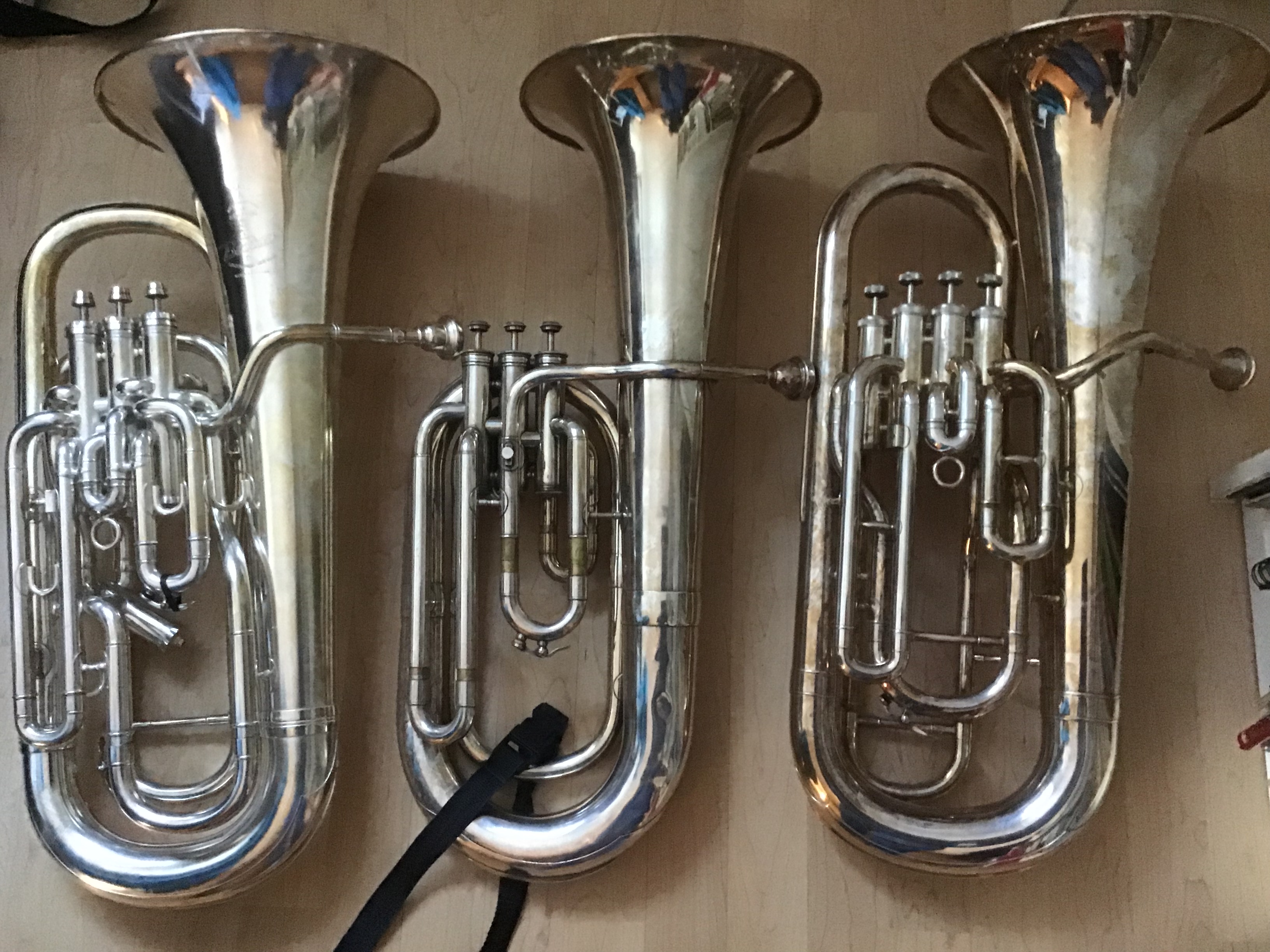 Left: Besson Class A - in the niddle: Courtois - right: Yamaha

The Euphonium and Baritone are all the same pitch but the sound and the size of the Baritone is thinner.

That means the Bariton has obvious the same length, but some Euphonium have a compensating system and the sound is more voluminous. That’s why it can be called also small tuba. The mouthpiece is bigger too.

Not all Euphonium have 4 valves and not all have this compensating system.

It plays the counterpoint to the cornets and because of this function it is also called the cello in the brass band, while the sound of a Baritone is rather like a Trombone (the the pitch of a Flugelhorn is an Octava higher!)

The biggest difference between them is the price.

19
Difference between Baritone and Euphonium
13
How do I approximate instruments when arranging an orchestral piece for brass ensemble
3
Is a Bb Baritone and a Baritone Horn the same instrument?
1
How would this woodwind's shape affect its sound?
9
Physical volume of instruments
0
Tuba = valved bugle? I thought it was trumpet
10
Why can a vuvuzela only play one pitch, while a non-valved bugle can play many?
1
The variety of all transposing instruments
44
Does the difference in harmonic series between instruments have a significant effect on the consonance of the sound?
3
Difference between Thomanns “Alto/Baritone horn”, “tenor horn”, “baritone” and euphonium?