How to write "Play this line, OR this line" with conventional music symbols

In a music sheet, how could I write down "play this line OR this line, as you like".

The reason is that if the player is skilled, they will choose to play the first line, but if not, they will prefer the second one.

Is there any defined way to write that? Any specific symbols? A convention?

That is called an "Ossia", it is a musical term for "alternatively". Which means the player can either play the alternative passage or the original passage. The Ossia is frequently used in Liszt's pieces. The Urtext for Balakirev's Islamey also contains many alternative passages.

Here is an example of an Ossia notation in Liszt's Hungarian Rhapsody No.6 in Db Major. 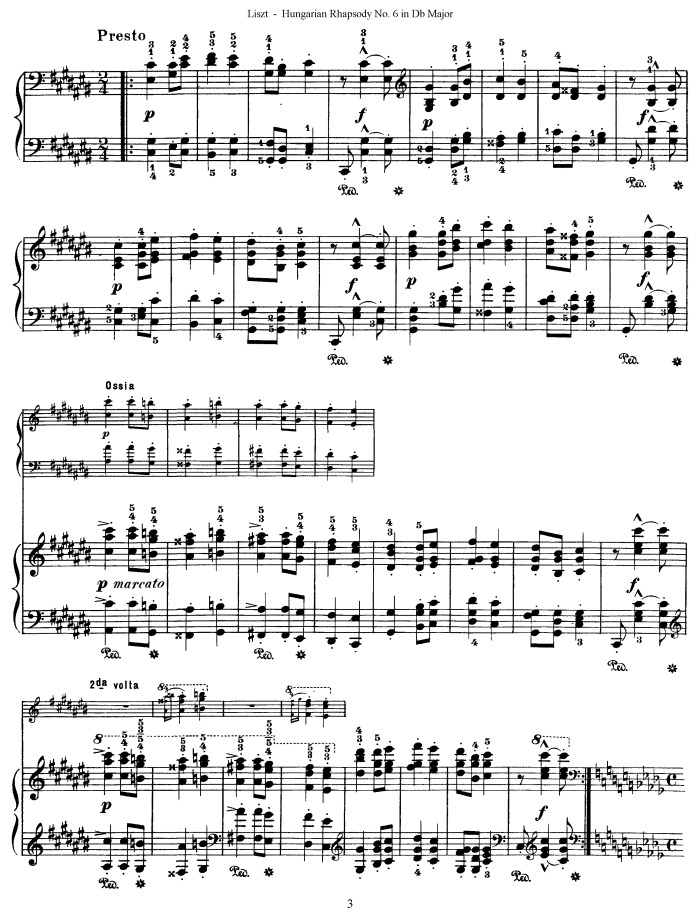 An Ossia passage could sometimes be notated only for one clef like in the example. Although I'm not sure if you could change the use of the sustain pedal in the alternative passage, it's better to ask a professional or a teacher. Or someone who might know.

This is called an Ossia. It's an extra line of music that floats over the music.

2
Extra measures above staff in Hungarian Rhapsody No. 6

16
Why is it common to write tuba sheet music in concert pitch?
16
What are all these symbols in some old sheet music?
4
How to write music using standard notation / Finding key
4
How do I spot original sheet music?
0
How to determine the key, divide the tabs and count the pauses when writing the sheet music of a song? (image included)
2
How to Write Out a Round in Sheet Music
2
How to write these notes?
2
Why is the alignment of notes written this way?
3
Why do Coda and Segno has symbols, while the jumps to them is always spelled with letters?