I have recently began learning to play scales, and while I can remember them across the strings and play them usually in whatever order pops into my head I would really like to be able to create finger picking melodies and really just simple melodies in general the most prominent notes of the scale, or what I assume would be the 5 notes of the pentatonic. I have attempted to use a method of learning scales by using the triads and building them up with the 4th and 7 until a pentatonic is mapped out across the fret board but I have a hard time remembering the patterns of the triads(see How to play melodic guitar solos). I would prefer not to use a system that hinders my technical ability, but rather lets me see the pieces of the puzzle before I put them together; and with things such as the CAGED system I feel like my mind just goes autopilot and I'm playing notes in a box rather than all across the fretboard like I would prefer. Any techniques to remember and play triads of a scale would be very much appreciated, and really any method to learn scales that isn't the CAGED system would be helpful.

I would reinforce the idea of not rejecting "caged" systems, as you only see them as caged because you haven't yet incorporated what underlies beneath the drawings, which are the actual notes of the scales, just visioned in the fretboard because that's how guitars are like. I myself have learned these drawings in order to incorporate in my automatic unconsciousness the playing of the scales and different excercises that give me the ability to rapidly know which notes of the scales are being played, or in any case, know which are the scales being interchanged during different chord progressions (such as secondary dominants, altered chords, modal interchange and so on) I recomend doing different sort of melodies like excercises all across the fretboard using only one scale (for example the Major scale) so you can with time get away with the "caged" thinking process and thinking them more like what they really are, which are scales, and scale tones, or chord tones. I make my own drawings and I can give you a bit of them fo you to practice, although you really need to go all across the entire fretboard doing the same melodic lines for you to grasp how the scales are placed on the guitar and ultimately much more (like chord extensions, built-in thirds, etc) Here are some of my drawing, hope you take your time in understanding them. You can start by going up or down these modes. Note that thirds are very important to chords, as chords are built in thirds, and the upper extenions are best understood this way (1,3,5,7,9,11,13) These are just some exapmles from which you could get the idea -after very much practicing them- and then think on your own melodic excercises all across the fretboard within the same scales. Think about modes and the different specific notes each of them have that differ from the Ionian and Aeolian which erally makes them unique (like the natural sixth of the Dorian scale instead of the flat sixth of the Aeolian, or the #11 [or #4] of the Lydian scale instead of the natural fourth of the Ionian.) 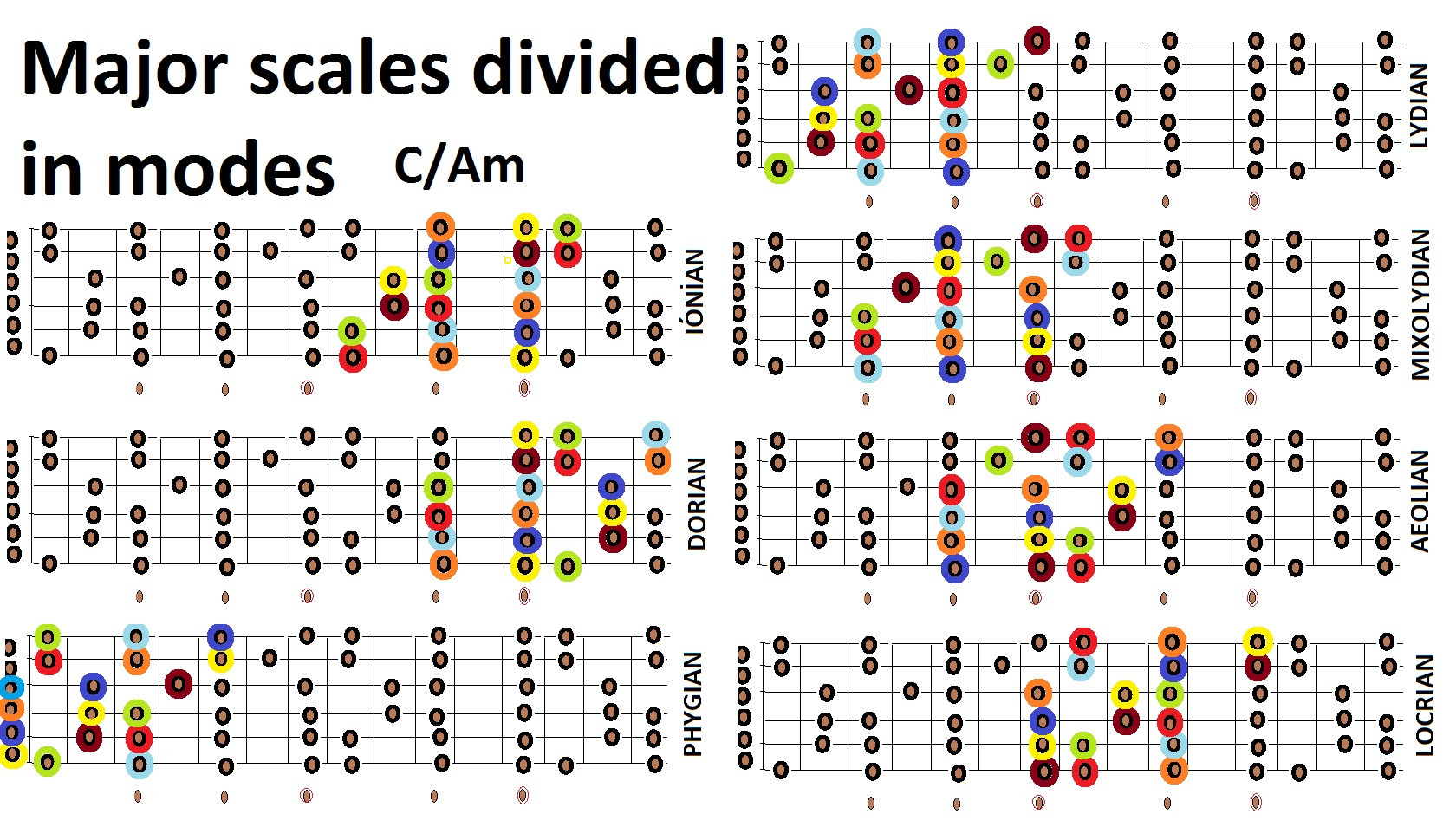 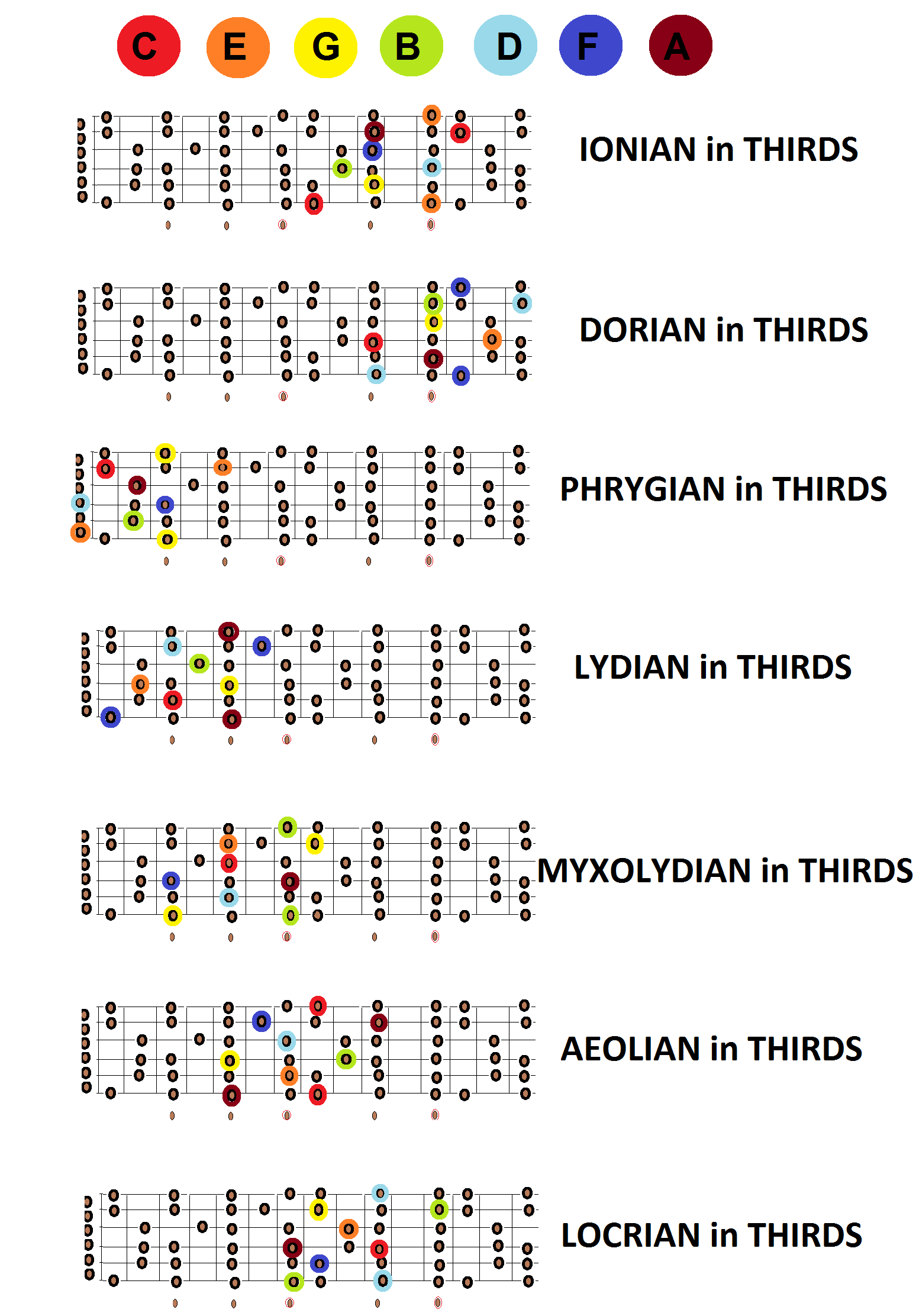 Whilst there are some (famous) tunes that only use pent notes, in the whole scheme of things, 4 and 7 (missing from main scale to make pent) are very important. The 7 particularly so, as the leading tone, it's one note that often precedes the tonic. Note 4 is the root note of chord IV, again an important part of any tune. So, full major scale, with all 7 notes, is de rigeur.

The pent works so well because it avoids 4 and 7, notes which are likely to sound dissonant anywhere in a tune. BUT - 4 and/or 7 WILL work admirably in certain parts, even where a pent note might sound not so good.

The middle of your question is questionable. Use a triad then add 4 and 7 to make a pent doesn't seem possible.

The box system only works because the guitar is what it is. Notes are found in a particular box, that work together, and that's convenient. It's useful to know the patterns, so playing in any key is fine, the patterns are the same, just higher or lower. There's nothing wrong in using the box with its handy notes, and often there's no need to move out of one box. It's not a sign of weakness or ignorance - it's convenience, and knowing the relationship between notes in one box is very, very useful.

Triads, as you probably know, are 1-3-5, 2-4-6, 3-5-7, 4-6-8 of a diatonic scale, so when you've learned your scale pattern(s), it'll be a simple job to find them. It should also come as no surprise that a lot of chord shapes will have triads on successive strings, often, but not always, tying in with the scale boxes.

If the system was suspect, thousands of guitarists wouldn't be using it, and re-inventing the wheel usually takes an awful lot of unnecessary, inconsequential effort!

You're right to be concerned about any system that results in you going on "autopilot". Remember that these systems are set up to help you learn a specific set of things - such as a set of interlocking scale fingerings that move across the fret board as in the so-called CAGED system. They are not (or should not) be an end unto themselves.

When you practice scales (or anything really) listen to yourself and try to play the material in a musical way. Don't just "type" on the guitar. If you zone out you've probably reached the limit of your attention and you should work on something else.

In the case of the specific thing you're trying to learn (minor triads, at least initially) you're probably trying to learn too much at one time. I recommend breaking things down and learning just the triad in one position first.

If you use the link you referenced, start with the first diagram and focus on one position (I'd start with the 3rd position.) Once you've learned that, move to the 5th position. Once that's also learned you'll have two positions and you can practice moving back and forth between them, playing the triad continuously across two or more octaves. (You'll probably find a couple of different useful ways to move between these two positions.)

There's already a lot of useful material in just two (or even one) position using only triads without going farther into the method presented. As stated before, you can play the root inversion G-minor triad across one or two positions, or you can start playing the first and second inversions of the G-minor triad.

Now you can decide if you want to continue into more positions with just the tirad or if you want to start adding the 4th and 7th scale degrees to get your minor pentatonic scale in these two positions.

At any rate, eventually you'd go on to the next step, linking two other positions (say the 5th and 7th) using just the triads before adding those other two notes. At each step of the way take your time and really explore the position and the link between it and adjacent positions.

Once you've covered twelve frets, explore different ways of linking the triads and pentatonic scale so that you can play them covering the entire range of your instrument.

Keep in mind that there other scales and other nice notes available within these patterns.

basically the process is simple:

grab a pitch-class series representation; use serialization techniques to figure out all the possible permutations for a 12 bit index, containing 3 1s (in other words, draw all the possible chords containing three notes); then transpose it to all the 12 root keys possible in twelve tone or equal tempered system eventually try some interval filtering techniques to get more to the point you want; practice the scales

some tips while practicing the scales:

try different rhythms;; try different articulations; practice with metronome, and increase the tempo, then decrease it; in the midst of this process increase the tempo slowly while you work on these kinds of things. so make scalual and every one or two weeks change your root tempo slickly little bit up, up to you reach 240bpm, then decrease it until 60, or 20bpm; practice with different fingerings

about the serialization technique:

this would be the same as creating a for loop, with 12 bits (4096 values), and converting the output values to 12 bit binary digits

Not the answer you're looking for? Browse other questions tagged guitar scales fingerstyle-guitar or ask your own question.

6
Approach to learning arpeggios for chord-tone soloing (shapes or notes)
15
What is the best way to learn scales in order to improve improvisation/writing of lead guitar parts?
2
When playing a scale for a solo do you play only within that octave on the fret board?
2
Learning Scales, should I initially focus on thirds and sixths as well?
1
Is there a CAGED system for pentatonic scales when playing guitar?
3
Guitar inversions / triads / CAGED
2
Beginner Confusion Over Guitar Scales
1
Learning path advices