My thumb does not bend, am I doomed to not be a decent guitarist?

I am physically unable to bend my thumb. not because of an injury--it's just the way it is. In order to compensate for the extra distance between my palm and the neck of the guitar, I am more prone to put extra pressure on the lower joint that connects the thumb to your palm. 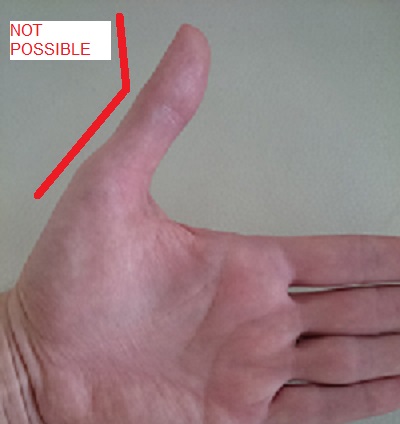 I noticed all guitar players can bend their thumbs, am I out of luck when it comes to playing the guitar? 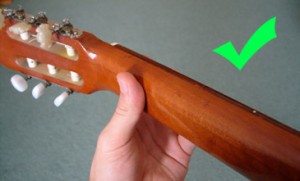 You haven't said what sort of guitar or playing you hope to do, but it doesn't have to be a problem. People with far greater disabilities than this have become great players.

There's really no great necessity to squeeze with the thumb on the back of the neck. It would appear so, and an awful lot of guitarists do it without realising, but with careful thinking and positioning of the instrument, it's just not needed.

That's obviously a classical guitar in the pic., but if you use an electric with a well sorted out action, the thumb pressure is even less. And it doesn't have to bend backwards anyway. Just enough tension to hold down the strings is good, most of which can be exerted through the two arms/hands.

My thumb bends less than yours and I've been playing string instruments for 37 years or so. My current band seems to have been successful gigging and touring for the last 7 years. I play everything from classical to heavy metal, via blues and rock.

Actually, I have never met a guitarist whose thumb bends like that in your picture.

I'm not sure why you think it would even be needed. Having a broad hand span is actually far more useful.

It is not extremely common to be able to bend your thumb backwards. I can't at all and have absolutely no issues.

Virtually no physical limitation will stop a determined player from getting good. (Case in point:

A player's unique limitations contribute to their unique style.

Don't worry about it too much. Hold the guitar however feels comfortable and right to you. There is no single correct way to play.

Your thumb looks perfectly fine. Yes, it is different from the thumb shown in the second photo, but just based on this photo I don't see it as a problem. That person bends the thumb back, because that's their natural range of motion, yours is different.

The most important message from the second photo is that in classical guitar technique the basic hand position is with the thumb touching the neck in the middle. The basic function of the thumb is stabilizing the position of the fretting hand. You shouldn't need apply much force with the thumb. If you feel that you need lot's of force to counter the force of the fingers pressing the string 1. examine your technique; perhaps you're using too much force to press the strings, 2. you can use your whole arm strength (a tiny fraction of it should be sufficient), rather just the thumb.

Note that it is a very common style to wrap your thumb around the neck of the guitar to fret or mute the fifth and six string. Like Tim said, even when playing with your thumb on the back of the neck, fully extending it like pictured isn't necessarily correct technique. It can be a sign of tension, which will only slow you down. My guess is that your thumb won't cause any problems.

If you do find that your thumb makes traditional guitar difficult/impossible, there's always the lap steel :).

It is not clear exactly how much movement you have, but I will say my daughter has had thumbs that do not bend at the last (Interphalangeal) joint since birth. She plays violin and ukulele just fine.

Not the answer you're looking for? Browse other questions tagged guitar performing physical-limitations or ask your own question.

5
Will damaged thumb joint hinder my ability to learn piano?

9
Does a guitarist need to know staff notation?
4
Building hand strength for when tapping on the guitar
8
Left hand position for high fretting (electric guitar)
14
Slightly tone-deaf?
4
When does a guitar neck bend happen and how to prevent it?
13
I cannot spread my fingers easily. Am I anatomically disadvantaged for playing the guitar?
4
How much is nut-width and neck-width a worry for finger-style playing?
3
Recommended thumb position and motion when using a thumbpick on an acoustic guitar
3
Is my guitar's neck too soft? How do I keep open string notes from wobbling when playing chords on lower frets?