Can an Eb Bass/Tuba play in both treble and bass without changing valve positions?

I'm going to be moving instruments at both Church and School next year. I was playing Baritone and will be moving to Eb Bass/Tuba. At church I will be playing treble clef and at school I will be playing bass clef. I was wondering if there is a way to not change valve positions for the notes and just read the clef as is.

Welcome to the wonderful world of transposing instruments!

Treble Clef E♭ parts are transposing. If you read a 'B♭', the note that the arranger wants you to play is really a D♭. But you're in luck, because there's a trick you can use to make this easy.

First, cross out the treble clef, and replace it with a bass clef. Then, add three flats to the key signature. If there are already sharps, each flat cancels out a sharp (so 2 sharps becomes 1 flat, for example). Now, play it as if it was a bass clef part.

You can verify this works with our example from before. Imagine a B♭ on a treble clef, with two flats in the key signature. Then, swap the clefs and add three flats. It becomes a D♭, which is the real note you need to play.

If you want to look at this solution more theoretically, you should be able to determine that swapping the clef and adding flats is equivalent to dropping the note an octave plus a major sixth, which is the reverse of the E♭ transposition.

You can apply the reverse technique to read a non-transposed bass clef part as an E♭ treble clef part. You need to replace the bass clef with a treble clef, and add three sharps. In my experience, bass clef is the norm for tuba, not E♭ treble, so I'd generally recommend learning to read the bass clef. I'm aware that this is not the norm in other band traditions, particularly British brass bands, so your mileage may vary.

For the record, I wouldn't suggest actually scribbling on your parts, unless you can make a copy of them. You should be able to do this swap mentally with a little bit of practice. This way you can play everything as if it were a bass clef part.

I'm from Salvation Army the only instrument in the band that reads bass is bass trombone. That way if I move to Eb Bass. I'll still be playing treble but at school I'll be given bass clef parts. So I will have to do to be able to play the music at school is add three sharps. Thanks.

I'm not sure you quite got it yet.....you add three sharps if you are reading Eb treble clef in place of bass clef, while pretending it is bass clef. If you don't already read bass clef, you will have to learn it if you are presented with bass clef parts at school for tuba.

Then there's the elephant in the room of learning C tuba for most major orchestras. 2 ways to do this. Read bass clef as bass clef but use treble clef fingerings, or just learn C tuba fingerings. Latter is best.

In some parts of the world (Australia, NZ, UK) the brass band tradition is that all the instruments read treble clef. So I learnt to play trombone in treble clef reading Bb transposed notes but actually sounding a ninth lower. The exception is third trombone (bass) which reads bass clef at pitch. So because you play Eb bass you can use the bass clef trick above to help you learn to read bass clef more quickly. But it still helps to learn the note names. As an aside - if you can read Bb as a low brass player, you will find that this helps you get familiar with tenor clef which crops up in orchestral literature.

You're accustomed to treble clef, I think? So for 'brass band treble clef' noation you pick up the Eb bass and carry on reading as before.

The dodge for reading concert pitch bass clef is to read the same lines and spaces as if it were treble clef but add three sharps to the key signature. (Sometimes this will result in a bass clef flat being read as a treble clef natural, a sharp becoming a double sharp...)

Initially you'll probably have to do a bit of preparation, and pencil in the fingerings at a few tricky spots (but do try not to cop out and pencil them ALL in!). After a short time I guarantee you'll be 'just reading it'. 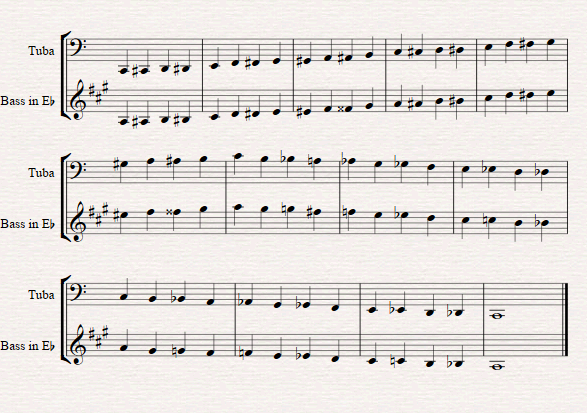 Not the answer you're looking for? Browse other questions tagged brass band tuba or ask your own question.

19
Teaching Bandmates to Count
16
Why is it common to write tuba sheet music in concert pitch?
13
How do I approximate instruments when arranging an orchestral piece for brass ensemble
3
Bass and treble clef brass parts
2
How to reach the lower notes on a B-flat tuba?
6
Why is my girlfriend's flugelhorn a semitone lower than my bass?
5
How should I think when I arrange music for tuba AND electric bass?
5
Transposing bass clef instruments for Tuba, Bombardon, and Contrabass
8
One tuba for everything: CC or F?
2
Attacking the G above staff on tenor trombone