What is the best way to play this on the guitar? 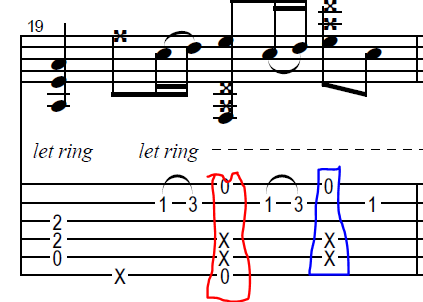 Might I inquire as to the best way to play the note marked by the red ink? I am having trouble with the muting part of it.

In "normal" cases, like the case marked by the blue ink, since the thumb isn't occupied, I'd just play it with a percussive slap. But in this case, the thumb is required to play the open 6th string. I tried to do the usual slap/mute with my other fingers, but well, let's just say I ended up with much noise pollution.

Any suggestions guys? Really appreciate your help guys. Thanks in advance.

Edited: The tab isn't supposed to be played in standard tuning. The 6th string is an F instead of the usual E in Standard Tuning.

Trying to understand the way the tab's written! In the red, the A and D are actually specifically marked as muted. However, the F(#?) previous is tabbed as an E, in the wrong octave, and in the blue, the A and D are tabbed two octaves higher. Someone explain, please! As it's written it's not even clear what is going on.

Trying to answer, you have four fingers and a thumb, with which to play a maximum of four 'notes' at the same time. Use them.

EDIT - there's a small possibility that whoever attempted to write the tab meant harmonics where the 'x' has been put. Still makes the F/# wrong.

RE-EDIT - the xs in the 'proper' notation are actual pitch harmonics, which are made using open strings as shown in the tab with xs also.Think they'll be 5th fret natural harmonics,easy to execute with the other notes being open strings. Probably best using fretting hand fingers above 5th fretwire.

The X means play the open string muted so it doesn't sound. It should make a percussive sound.

Guitar music if crazy to understand for most people who read standard notation. What the composer is getting at is the open string should ring out what the muted strings (played percussively) should be staccato. The reason the Xs are on the staff is to indicate what note is muted.

Not the answer you're looking for? Browse other questions tagged guitar acoustic-guitar tablature or ask your own question.

9
Should I mute “unwanted” strings or not when playing power chords?
0
What is the best way to learn to play a piece on the guitar?
8
Best way for this lefty to play guitar?
2
Open chords with played strings marked x
1
Are nylon guitar strings sold in a pack such that only first 3 are nylon, rest steel?
0
I am having trouble in knowing the correct way to play this legato on a guitar tablature.
27
How do I stop muting nearby strings or will my fingers reshape after some practice?
1
How to accurately drop-tune an acoustic guitar?
3
Mic, cable, pre-amp setup for acoustic guitar to perform with big band through mic and guitar amp?
6
High E String Buzzing Only When Picked Open