Why do intervals sound "better" or "worse" depending on distance?

Is it how the ear and brain register the harmonics?

A lot of the answers here focus on harmonics, and those are related to this issue. But the main reason why notes that are close together in the bass register can sound "muddy" or even somewhat dissonant within a normally consonant sonority (like a major triad played at the bottom of the piano) is because of psychoacoustical phenomena such as "sensory roughness" that are ultimately related to critical bands.

Critical bands are related to the response of the cochlea within the ear. Notes that are close to each other in frequency can fall within a region too close together to be discriminated completely by the nerves in the ear. They are not heard as "the same note," but some of their features become fused or interrelated during the processing by the auditory system. (This can lead to perception of "beating" or "roughness" in the sound, as well as other effects like auditory masking.) Two notes that fall so close together as to encounter this sort of phenomena are said to be within a "critical band" of frequencies. The roughness and beating that is heard when notes fall into a critical band are part of what produces a sensation of "dissonance" when two notes are close together.

In any case, critical bands vary in their size over the frequency range that humans can hear. In the lowest register, they tend to be quite wide (as much as a major third or more). That means that near the bottom of the piano, intervals that are normally considered "consonant" (like thirds) fall within a range that the ear perceives them as potentially "beating" against each other and/or with a sensation of "roughness." That's the primary reason why a major triad that low can sound "muddy" and unclear -- in the low register, our ears simply don't have the mechanism to discriminate musical intervals well when the notes are close together.

Now, harmonics are still related to this, as sounds with low fundamentals that have strong harmonics may also produce more clear beating patterns between them in the central range of hearing, enhancing the sensation of "roughness." But even without those harmonics, humans perceive greater roughness in chords in the low register.

As for high registers, chords don't necessarily have to be closely spaced to sound good, but close spacing can help to reinforce the sensation of a single "chord" by fusing together harmonics as part of a fundamental (whether or not that fundamental is actually present in the low register within the chord). And for very high registers, there may not be that many harmonics within the range of hearing to help reinforce the relationships between the notes of a chord, so keeping notes closer together can be helpful.

As an aside, it's important to note that minor errors in the "clashing harmonics" are not the primary reason for the "muddy" effect in the low register. To build on one previous answer's example, if one played a low C2 and E2 together on an equal-tempered instrument, the E4 harmonic of the C2 would be 16 cents lower than the E4 harmonic of the E2. Yes, that produces beating among the harmonics, which gives equal tempered thirds their well-known "buzz" or "liveliness" in sound compared to just intonation. Unless you're a piano tuner or someone really focused on listening the beats of harmonics within sounds, you likely won't perceive this small error in the harmonics as "dissonance" per se, much less the cause of the "muddiness" in the bass register.

And this problem is not changed by moving the E2 up a couple octaves. In fact, it's made somewhat worse. If one plays a C2 and E4 together, the harmonic of the C2 is in direct conflict with the fundamental of the E4, with that same 16-cent difference. Beating will still happen. Yet, the wide C2-E4 interval is often heard as more pleasant than the C2-E2 muddy bass interval. Thus, the problem is deeper than beating of harmonics, which occur in equal temperament no matter what. (And inharmonicity generally produces even smaller "errors" between the overtones than the effects of temperament, so again, it's not the primary cause here.)

Chords "point" at a common fundamental.

A power chord has frequencies (in terms of its fundamental) of (1, 3/2), making for a greatest common divisor (in terms of whole multiples, pardon the mathematical fuzziness) of 1/2, one octave below the fundamental.

So for major chords, but much more so for minor ones, the "insinuated" root note is much lower than for power chords, and if you start from a low note already, the insinuated root note will be outside of hearing range and more like a low-frequency vibration/oscillation. This "insinuation" is not purely virtual: it is the actual periodicity of the resulting full signal and any sympathetic low-frequency vibration will occur with it or one of its overtones.

If it is outside the range of normal hearing, it will not be perceived as contributing to harmony since it does not register in a fixed position in the inner ear (which is the ultimate instance of sympathetic vibration involved in hearing).

In addition, many instruments have "disharmonicity" increasingly in lower notes, meaning that the physical overtones are not whole multiples of the fundamentals. String instruments with thick strings in comparison to their length (particularly smaller/upright pianos but also the low notes of a viola, comparatively short strings for their range, and smaller double basses and clean(!) electric basses), wind pipes with significant end effects and a few others.

Contrast this to instruments with a high-overtone harmonic oscillator (vocal chords, brass and reed instruments as well as free-reeds like harmonium, accordion, reed organ): here the overtones are forced to be a multiple of the fundamental because of a regularly stopped air stream. Working with them as material tends to produce somewhat less muddy harmonic stacking, but they still have the problem of an implied fundamental possibly getting out of hearing range.

Also their high overtone content, harmonic or not, makes them most eligible for power-of-two implications. So the difference in workability at low pitch for major and minor chords gets even worse than with low-overtone bass instruments.

This is a good question. The reason in short is that harmonics are not always in tune.

Note I am oversimplifying

Let's consider the interval between C3 and E3, a major third. Take a note C3 played on a guitar string. Measuring the harmonics that come along with that note we get: 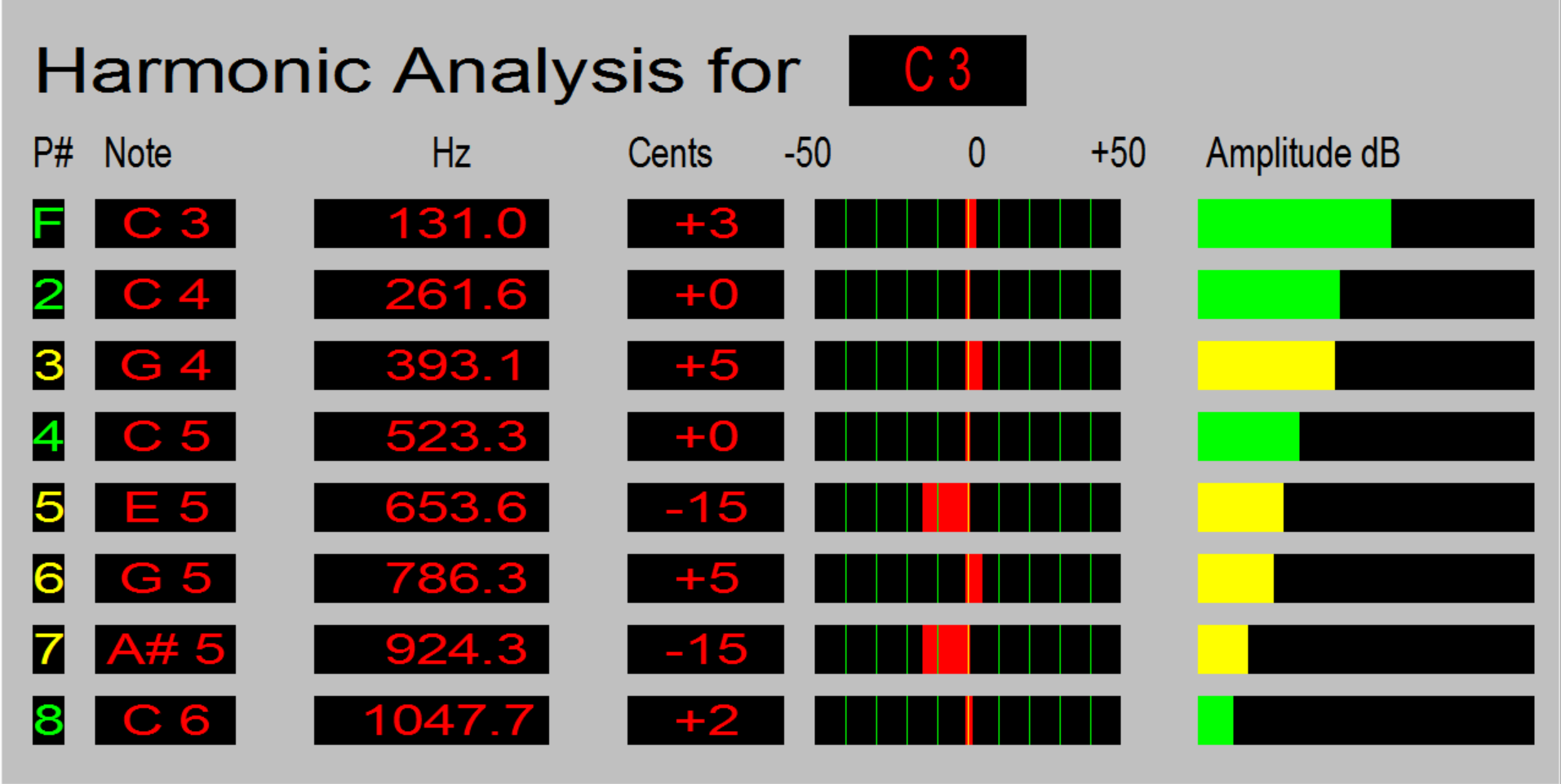 The harmonics for the E3 are measured as: 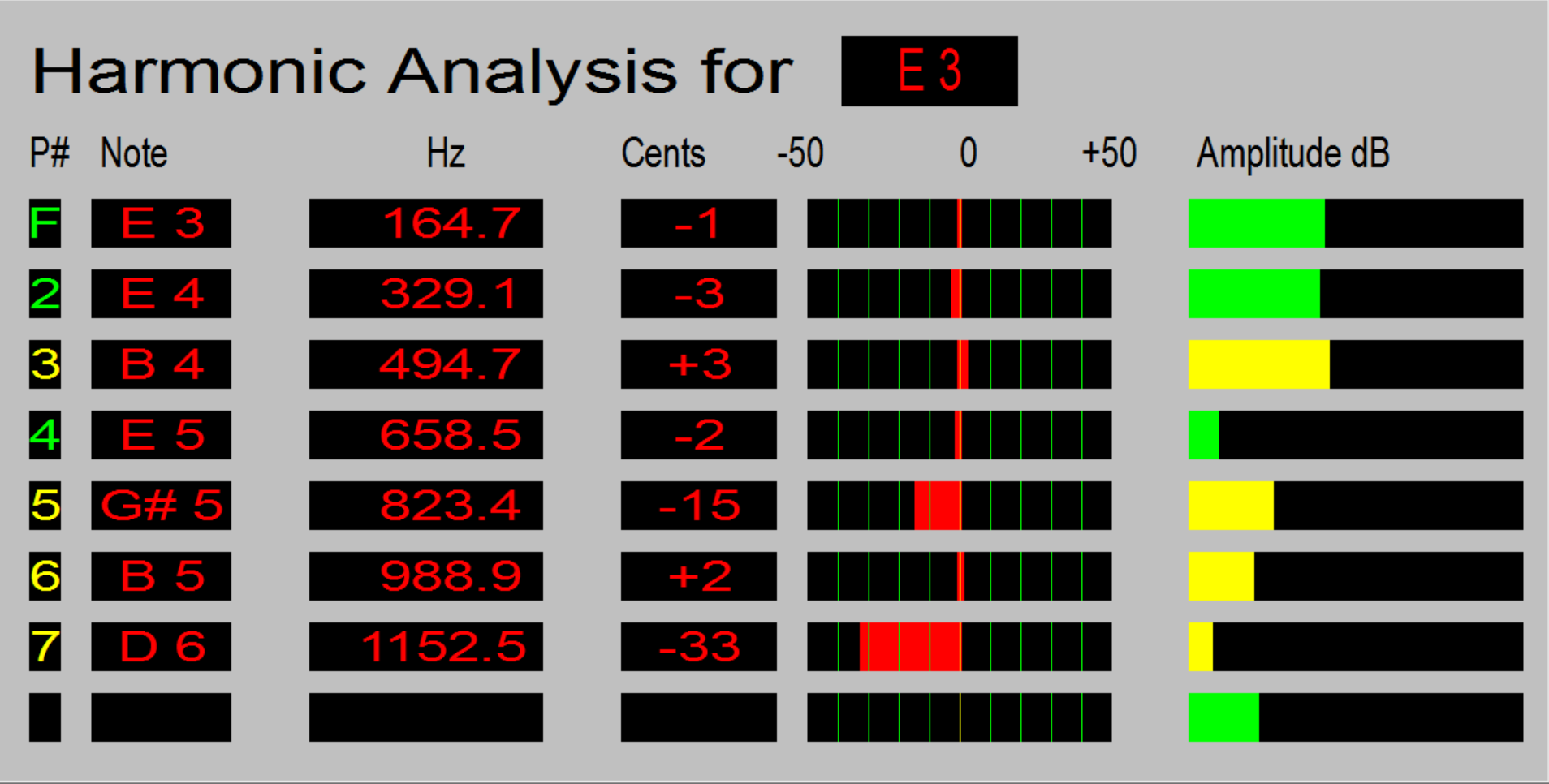 They are the same note, but are "out of tune" from each other by 13 cents. In this case they are fairly quiet but the clash between them would still be audible.

The higher notes sound clearer to us because of several factors. The higher harmonics are harder to hear. They also decay much more quickly.

I have some software on my computer which I can use to visualize what I am saying.

With any chord, you want to define it as efficiently and with as much clarity as possible (i'm writing this from a jazz piano background, so this may or may not be a good explanation)

First off, defining the root note - it's going to get muddy down there if the root isn't way down there on its own. Think of what a bass player is doing - they're not playing big thick chords, because it would sound like a big cluster of mud if they did. Yep, it is due to harmonics, or overtones. Way down that low, there's way too many first, second and third harmonics clashing if multiple notes played - our ear can't make it out, and it becomes noise pretty quickly without definition.

On the other hand, think of a big clear root note, with a third defining the chord an octave or two above that, with a seven and nine shimmering over the top. It's big, it's open, it's simple, it breathes, and we can differentiate every note of the chord, rather than having all those notes fighting each other for space

How good an interval sounds can be predicted based on the ratio between the frequency of the two notes. (Note that this is a very general description of consonance, and other factors such as cultural context and even the context of just the song can play a much larger factor.) In general, a simple ratio is heard as more consonant, such as 2/1 (an octave) or 3/2 (a perfect fifth) as opposed to 13/11.

For example, let's say you start with the note A, tuned at 440 Hz. A perfect fifth, E, above it would be about 660 Hz. In various tuning systems such as 12 equal temperament, this fifth would be compromised slightly, but the ratio would be close enough for our ears to hear it as a simple 3/2 ratio. But if you bring that E up an octave by multiplying it by 2/1, you get an even simpler ratio, 3/1. Another example would be 5/4, a major third. Bringing that up an octave would produce a compound major third, 5/2, which would be more consonant if we follow the idea that simple intervals are more consonant.

However, this does not apply to all intervals, such as the minor 2nd, which could be tuned as 16/15. If we multiply this ratio by 2, we get a more complex ratio, 32/15. This is, as I understand it, the reason why a minor 9th sounds more dissonant (to me) than a minor 2nd or a major 7th (which we get from just flipping the fraction, i.e. 15/8).

Another aspect to consider is that higher harmonics are quieter, especially with certain electronic timbres. So even if the ratio might clash a lot, if the notes are very far apart, they can be heard more separately and not really as a single harmony. For example, take the previous example of a minor 2nd. While a minor 2nd is very dissonant, if you play for example a C2 against a Db5, there won't be as much clash because the higher harmonics of the C2 are too quiet to interact.

Not the answer you're looking for? Browse other questions tagged theory harmony intervals harmonics or ask your own question.

15
Why one shouldn't play the 6th string of an A chord on guitar?

7
Trouble identifying descending intervals, but no trouble ascending
3
Having trouble identifying M3 and m3 when played sequentially in different registers
5
Why do low chords sound muddier than high chords?
2
Why do certain vocal melodies work in context when those same melodies would sound dissonant on instruments?
24
Why is a doubling of frequency called an octave?
6
Why do major and minor triads sound different both harmonically and melodically?
4
Why does a guitar strum sound better when the G,B & E strings are flat?
1
Why do I have more ease with the higher pitches?