How to work out the key of a song whose chords don't seem to fit an obvious scale?

I don't really know where to start with "House of the Rising Sun" as an example of a song which doesn't have an obvious key. How would I go about working this out - and does it actually matter that much?

Google authoritatively says "F major" but the top google result with some solid discussion claims otherwise (A minor with talk of modal variation), and Google doesn't substantiate its claim or even say where it gets this information: 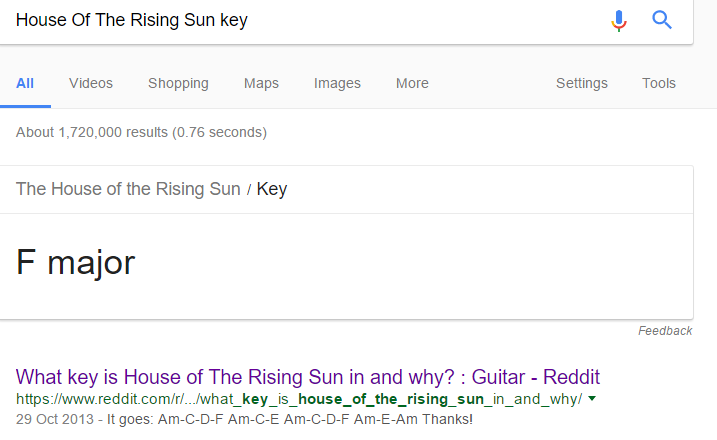 Is it always the case there is a right answer, or is it possible you can argue the case for different keys equally strongly?

Regarding the larger question, the key for a song is more about the tonal center than it is about fitting into a pattern of notes (a scale).

It also might help to realize that some pieces of music have very weak or even non-existent tonal centers. In these cases, neither going by feel or theory will really answer the question, and then the larger question of what key it's in might be unanswerable, but also doesn't matter very much.

As an example of a piece that has a fairly strong tonal center that is possible to feel and determine by theory, we can go right to your example, The House of the Rising Sun. Listen to it without thinking too much but feeling instead, and feel for the "landing" place. For the vast majority of humans, it will feel like it "lands" or "comes home" right at the end of the first verse when the lyrics are "...house/of the ri-sing sun."

I put "sun" in bold because that's the actual landing site. Everything leads up to that word and note and chord. That's an A minor chord right there, so our feeling is that the song is in A minor. Now if we apply theory, and look at the chords, we will see that at that point the chords go Am - E - Am. That's a pretty solid perfect authentic cadence, which is just fancy talk for a "three point landing" in music. It's not just a landing, it's a solid landing, that leaves little doubt about whether it was a landing or not. Again, theory says, "Hey, we just touched down in the key of A minor."

For an example of a piece without much of a tonal center, I direct your attention (and possibly considerable patience), towards a selection from Musica Ricercata by Gyorgi Ligeti (made (in)famous by its use in the movie Eyes Wide Shut):

There are only three or four different notes played in the selection (in different octaves), and that's not a lot of material to get either a feeling or theoretical basis for a tonal center. If the notes used had an interval of a fifth, we might be able to make a case for the note that is a fifth below the other note being a tonal center. Instead the most commonly played notes form the interval of a minor second. Which means either could be an upper or lower leading tone of the other, although in context they don't really work that way. It's minimalist, maybe a bit impressionistic, and it defies traditional theoretical analysis. It does evoke emotion (in most people), so it's certainly valid music even though it defies the type of analysis we are used to doing.

To me that's a good lesson in why we can't get too bogged down in the theory. The theory doesn't drive the music. The theory just comes afterwards and tries to rationalize it, or even explain it. But it's not about theory, and sometimes it's not important to know what key a piece is in.

While there is wiggle room especially when dealing with songs that have atypical / constantly changing harmony, most of the time the key will be pretty clear.

Remember while a key give you a note you'll sound at rest at and the expected harmony, you're not restricted to just chords you can build off of scales in fact most times you'll have trouble staying strictly inside that set of chords especially in minor keys.

For House of the Rising Sun, just follow the dominants and resolutions. Since E major is a dominant of A and leads really well back to an A minor chord to loop the progression it's easy to see that's the key. In general if you don't know of the top of your head, just play the progression and try to end back on one of the chords of the song. One will sound much more at rest than the other.

Rising Sun is a very old trad. song, and early versions were more likely to be in D minor. Possibly hence Google saying F - the relative.

The more definitive, or better known version by the Animals, is in Am, although the clue giving (usually) last chord is C6, but that still points to A minor.

On to the question itself. As other answers say, it's where the song feels at rest, at home, where it could end naturally.As Todd says, usually on a key word. That then will have you saying well, if it's in A minor, why D?. Good question, answered by - songs sometimes use chords from the parallel key. Parallel to A minor is A major - containing D !

Not the answer you're looking for? Browse other questions tagged theory key transcription or ask your own question.

3
Finding The Key Of A Song

30
How many (major and minor) keys are there? Why?
3
How can you find the key of a song by ear?
7
My Chords Don't Fit Any Scale, What Do I Do?
1
Having a set of notes from a song how can I find out the right key which is written in, from the possible ones (considering modes) that fit those?
2
How to work out the key of a song which has a few of the same chords of more than one key
3
Can't seem to figure out the key of a chord progression?
8
Notes in a lick that don't fit in the scale associated with the chord
13
How to figure out key from key signature?
6
Will two versions of a song, in the same key, fit together if supporting chords differ?