The way I have parallel keys in my head is that a major key is always three half-steps higher than a minor key. I was trying to evaluate this on the circle of fifths and also during an exam, but I realized that at some point this can actually fail, namely when enharmonic spellings are at work.

For example, during an exam I was given the two following keys and was asked to write their parallels;

What I did was to follow the principle I had in my head:

So I failed in the first case. The correct answer is actually E♭ major.

But in the second case, did I succeed? B♭ minor is their on the circle of fifths, but A♯ is there too!! 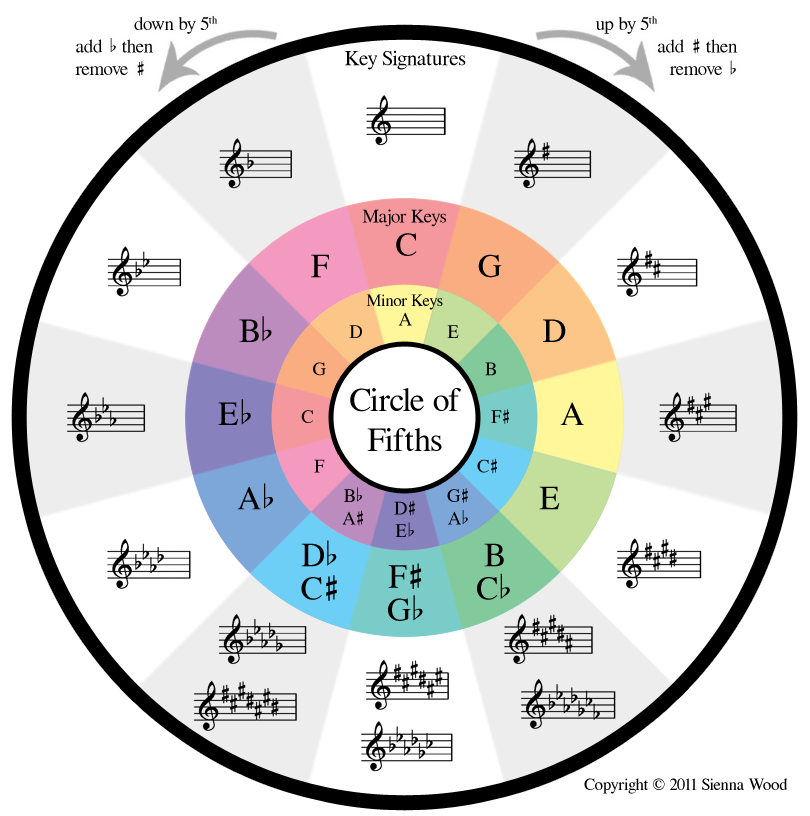 It has to do with the idea of "Enharmonic equivalents".

You should have arrived at Eb flat major when you counted up in your head because that was the key you were in. Had the note you were given been B#, you would have counted up to D# and it would have worked.

An enharmonic equivalent is when two notes are the same, that is played at the same spot, but have different names.

For example, D# and E-flat are enharmonic equivalents.

So, in your example, The key of E flat has the following notes

And so the relative minor is C minor because (among other ways) you find the parallel minor by locating the sixth scale degree.

The relative minor C minor would have

The notes in the key of D# will contain notes which are the enharmonic equivalent to the notes in Eb.

So the relative minor would be called B# minor. So if you had been given the note B# you should have arrived at D# like you did.

If you spelled both these minor scales out you would be able to adjust the labels for the notes in a way that they both used the same notes. They are spelled differently though just as is.

When you counted up you switched flats and sharps and that is why you arrived at D# instead of Eb. Counting up in C minor you should have used flats, if the note had been B# you would have used sharps.

These are NOT parallel, they're relative. Parallel keys both start on the same note/root.

The problem stems from not knowing the key sigs. C minor has the same key sig as Eb major. 3 flats. Not a sharp in sight, so D# couldn't be a good answer. Every key has 7 different letter names for the 7 different notes. Using your idea, go through C minor scale. C, D, D#, F, G. That is wrong - there's two 'D' names, and no 'E' name. So, we use Eb in preference. Much easier when stuff has to be written on staves.

In the Db case, you would succeed if the question asked for relative keys. Count up the scale - Db Eb F Gb Ab Bb C. 6th one up is Bb. Where was A#? Got knocked out by the A being Ab, so the B needed to be Bb. Pretty straightforward!

The basic answer is that standard keys do not have any double sharps or flats in them.

A better rule than "three half steps" might be "a minor third". This should always work -- for example, C minor -> Eb major, Bb minor -> Db major.

'Three half steps' is correct, as far as it goes. The rest of the story is 'a minor third'. Any interval of a third includes three letter-names. So C, D, Eb rather than C, D, D#.

If you want more reasons, think what notes are in C minor scale, and in Eb major. Plenty of identical spellings, yes? So we spell it that way, not as D# minor.

Want a way to remember it? A Major in the army retires with a bit of loot and buys a diamond mine. Of course, he needs to employ a Miner to do the digging. When the Major needs to visit the Miner he goes DOWN three half-steps (it's a shallow mine). Another name for this distance is a Minor Third. Three notes, three letters.

any scales should be in CDEFGAB form,

in the wrong case you will have an extra D; D and D#.

the key is right but in theory the presentation is wrong.

The simple reason is that if D# Major were a key, it would have nine sharps. Meanwhile, D# Minor actually exists, and has six sharps.

You'll always get the right answer if you remember that one parallel key can't have sharps while the other has flats. C Minor has three flats, so its parallel major is also a flat key. D# Minor uses the same piano keys as both Gb Major and F# Major, but it is only parallel to F# Major, while Gb Major is parallel to Eb Minor.

You got the answer right the first time. Only change that I would do, to be 100% theoretically correct is to only use notes within given scale.

Cminor (in this scale you don't have D# note but you do Eb).

It all comes down to circle of Fifths and Fourths. Cminor comes from Circle of Fourths and within this circle we can Eb scale or chord.

28
Why is music for strings more likely to be in keys with sharps?
4
Why is the C♯ chord in B minor diminished?
4
Chromatic 7th chords going upwards in Beethoven
4
Why does the circle of fifths have to be symmetric
3
Modulation from D major to D minor, should I go sudden or gradual?
1
Measuring key-relatedness of chords on the circle of fifths
1
Is B major harder or easier to play on strings than Ab major?
1
Which key signature contains C sharp with B natural , E natural and F natural?
5
Key signatures in Dvorak 9th symphony
4
Does the same key have both major and minor pentatonic notes?