How to play two voices with a large range in the same hand?

My copy of Leonard Cohen's Hallelujah includes the following measures:

I don't know how to play the left hand. My problem is that I cannot reach from F2 to A3 (in the first bar, others correspondingly). My right hand is busy and far away, so I can't use that either.

The answer to similar questions regarding large chords is usually to arpeggiate them, but I'm not sure whether this applies (and how) in my situation where the wide range is in the melody rather than in the harmony.

This is a case where use of the pedal is needed. You use the pedal to hold the bass note and you change it when the bass is changing. In this excerpt at the beginning of every measure.

Note that Leonard Cohen basically is a guitar player, and for guitar, this kind of per-measure bass note with a treble figure spanning a large interval all-in-all is pretty much par for the course. The piano transcription here captures the musical spirit if not the execution. Also note that with a guitar, the treble notes are usually left to ring when they form a broken chord and the string is not required for other notes of the figure. The treble strings, however, don't have quite the sustain power of the metal-wound bass strings.

Taking all that together, a piano rendition of that passage will fit the original Cohen style quite well by just employing the sustain pedal every measure. Not every wide-range polyphonic string instrument passage can be mapped to piano that well, but this one works fine by pedaling it.

Chopin and Liszt had different philosophies about writing heard/intended vs. held note values. Liszt had no compunctions about writing, say, left hand chords that cannot be held their entire value with the fingers (required elsewhere) and which therefore need the sostenuto pedal to "sound" their full indicated value (even when no pedal is explicitly indicated). Chopin, on the other hand, was fairly scrupulous in writing note/chord values that could be sustained with the fingers depressing the keys; otherwise, he would write a shorter "practical/playable" note value and use pedal markings to approximate the intended duration/effect.

Chopin Valse Op. 69 n.1. The left hand downbeats change in duration from three beats to one when they can't be held, but the pedaling remains the same! (By writing these as dotted half-notes, Chopin clearly wants the player to bring out these notes as their own descending, legato voice.)

Chopin Barcarolle. Note the very practical left-hand rest after the staccato quarter-note octave, giving the pianist time to move the hand up. The value intended/heard is determined by the end-pedal mark. 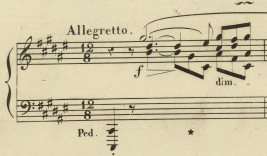 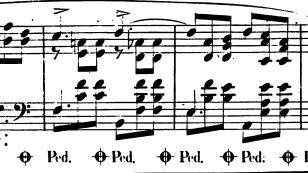 This example is similar to the Valse above. No doubt Chopin would have superimposed a dotted quarter-note on the lowest eighth-note in each measure but for the impossible reach, in parallel with the right hand, which does, since it can be held there (and is, in fact, tied over). The listener is none the wiser, given the pedaling, but this nuanced writing shows that pedal indications were a separate consideration for Chopin. Some might argue that he is being too picky, but, from the viewpoint of piano technique, it helps to know what the composer thought is possible to play (and hold) and what, instead, needs the pedal to accomplish.

Liszt Lyon. Liszt writes pedal markings, but conceptually, at least, the left hand values continue the style of the preceding measure (no rests in the bass in either measure), so he writes a double-dotted half note, which, of course, can sound its full value only with the aid of the pedal. The pianist has to decide how long the double-dotted notes can be practically held. 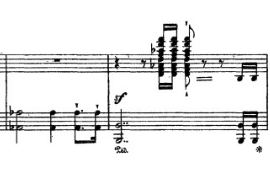 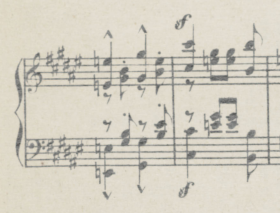 The left-hand quarter notes are the intention, but their length has to be implied through the strongest emphasis/accent and pedaling, since they cannot be held their full value. In the second measure shown (and four measures later as well), the sf quarter-note octaves should be dotted, as corroborated by the lack of an eighth rest in this voice were it a true quarter note. This was probably a printing error in the first edition and was corrected in the Bärenreiter urtext edition, which has a dotted quarter-note.

I'm not saying Chopin adheres to this writing style 100% of the time, but I think you'll find he usually does write note values that can actually be held with the fingers. To sum up, you might say Liszt adopts a quasi orchestral approach--the piano score is almost an orchestral reduction; Chopin is ever the pianist, writing note values that can actually be played (held), overlaid with pedal markings. Liszt, of course, was a flamboyant composer, and often wrote multiple voices whose clarity would be lost if he were forced to write note values based strictly on their playability: he is creating a virtual orchestra, even if all the parts are played by a one-man-band.

As Tim H says, the pedal will come to your aid. Here, it works well, as the harmony stays the same for each bar, which is why the one bass note can last the bar too. If there were chord changes within the bar, but the bass note stayed long, it would be problematic.

0
Scott Joplin "Solace", Sustained bass note with other notes in left hand
9
When does the amount of beats not add up to the time signature? (Besides pickup measures)
8
How to play large chord?
2
Chopin - Étude in A minor, Op.25 No.11 "Winterwind" Pedalling Discrepancies Between Sheet Music and Performances