How are guitar chords built?

I am learning to play guitar by myself, and it is hard to understand some theory about how guitar chords are built. For example let's look at a G chord. I have found two of the most simple definitions: 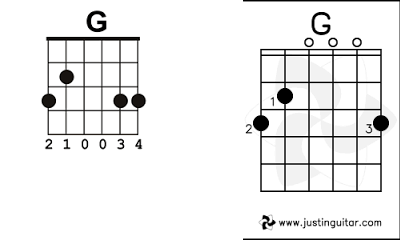 But as I understand major chords are built from 1st, 3rd and 5th notes of the major scale, which is:

Therefore it should be G B D. Where am I wrong?

The same question is about E chord.

And one more question. How is it possible for chord to have more than 3 notes, like the G chord on the 3rd fret, if the chord is a triad?

How is it possible for chord to have more than 3 notes, like for G chord on 3rd fret, if chord is a triad?

A chord with three scale degrees doesn't have to only have three notes - it can contain repetitions of those notes in different octaves.

In both of these diagrams, you can play all the strings - not just the ones you put your fingers on! So actually you have

So, you see that these chords are made up of the notes G, B, D - it's just that some of them are repeated.

So, how do you know when you can play the open strings (the ones without your finger on? 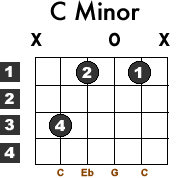 It's a strange concept for beginners to grasp, but yes, you're correct, a triad chord has three notes. However (there's usually one of those), there's nothing to say how many of each there are. One of each is fine - without all three, it's not a triad - but we then get into voicing, which makes each chord sound subtly different.

Guitar is really a special case, because of the 6 strings. What I do with students at some point is to present a triad. Let's say C major, CEG. Take each string in turn, and find a C, E or G playable on it. Obviously when the notes have been found, they must be playable simultaneously, otherwise it can't be a 6 string guitar chord.

6th string could be E or G. 5th is C. 4th makes E. 3rd, open is G. 2nd finds another C, and top can be E or G. So now we have 4 different versions of Cmaj. All with some Cs, some Es and some Gs. All can be classed as correct, but some sound better in certain songs than others.

How are such chords translated onto a guitar fretboard? This can be done in various ways, but the core principle is that each string played or strummed should be one of the notes that makes up the chord. For example, the following guitar tab lists several chords. All of them are valid G chords, but they are all slightly different. (To read the chords, the horizontal lines represent the strings. The first line is string 1, down to line 6 which is string 6. The chords are read vertically and the top line is a numeric reference for the related comments after the tab.)

Chord #1 is the tab version of the first diagram from the OP. The OP asks a good question: "How is it possible for chord to have more than 3 notes…if the chord is a triad?" In one sense this is a six note chord because it includes all six strings of the guitar. But in another sense it is a triad because only three distinct notes are involved. G is played on strings 1, 3 and 6; B is played on strings 2 and 5; and D is played on string 4.

Chord #2 is the same as #1 with one exception. On string 2 the note played is at fret 3, which is a D instead of a B. This is known as a different voicing of the chord. The same three notes are involved across the six strings, but there is a slightly different balance. We have gone from two Bs and one D to the opposite, one B and two Ds.

Chord #3 is a chord played on only three of the strings. It now matches the three notes in the theoretical G chord: G on string 6, B on string 5 and D on string 4. Strings 3 to 1 are not played. This chord might be either strummed or plucked according to context.

Chord #4 is another example of a three string chord, but now the notes are played on strings 5, 4 and 3. The chord is still a G chord as with #3, because the same three notes that make up a G chord are present. But the order of notes is different, and this difference is known in chord theory as an inversion. the inversion is defined by the lowest pitched or bass note. So #3 is the first inversion of a G chord (G-B-D); #4 is the second inversion (B-D-G). The third inversion is D-G-B, and is tabbed as chord #5.

Second (and perhaps related to the previous comment) is this from the OP:

It is correct that an E chord is constructed from the notes E-G#-B. But it is not correct to read the diagram as E-G-B. The third string is the G string, but the finger is fretting that string on fret 1, so you will be correctly playing a G# note.

While there is the triad, there is all the other notes in the scale that you can add to change how chord sounds. Such as a dominant 7 on top of the triad to make the chord sound bluesy. Or a maj7 which makes the chord sound jazzy. Those are just the start to add on notes but is another way a chord could have more than just the basic triad. Learning more about the add ons and experimenting with them in progressions and such can really spice up your playing. Also it actually helps a lot with soloing on chords.

3
How do chords work on guitar?

22
Why are thirds used to construct chords?
12
The chord formula for the Major Chord is 1- 3 - 5. What do the numbers represent?
5
Building Lydian chords
0
Diatonic chords: Definition, purpose, and application
0
Making part of a triad chord sharper, but is it counted as minor?
5
How to understand chords in first inversion with notes out of order
2
How To Build and Name 7th Chords
0
Static Pentatonic Scale
0
'Extended Secondary Dominant Chords'?