What have I misunderstood about calculating intervals?

Caution: I have studied single-variable calculus, but have never taken a physics course.

Vi Hart demonstrates with a violin that on a violin string's length, playing at:
1/2 produces a note an octave (a.k.a. P8) higher,
and 1/3 a perfect fifth (P5) higher. 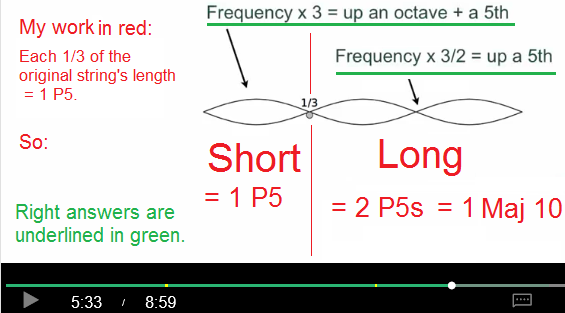 [5:21] Splitting the string into thirds creates a P5 on the longer segment[,] and a P5 plus an octave on the shorter segments since it's only half the length.

[5:33] The 2 sides of the subdivision vibrate at different speeds. The shorter the string the faster the vibration and the higher the pitch. So the longer right hand side vibrates an P8 lower than the left hand side since the 2:1 equals an P8. This works mathematically also. Dividing the string into 3rds means that each of those 3rds will vibrate 3 times faster than the original or 786 Hz. This is what the short side of this subdivision sounds like. The long side of the string is twice as long so it sounds an P8 lower at a frequency 393 Hz, that is 1/2 the value of the short side, or 3/2 the value of the original.

This is the fundamental mode of a vibrating string:

This is the 2nd mode, consisting of two sections vibrating at twice the frequency (aka an octave higher):

The reason this has twice the frequency is simply that the length of each section is only ½ of the string, thus the vibration's momentum needs only half the time to get from one end to the other.

This is the 3rd mode, consisting of three sections vibrating each at thrice the frequency (aka an octave an a fifth / aka a tritave aka a twelfth higher), for the same reason:

All of these work because every node seperates sections which behave the same, thus the forces on each side balance at all times.

Now what you describe seems to be a division into two unequal sections, like this:

But it's quite visible here why this isn't actually a mode of a freely vibrating string: the node is not force-balanced on both sides but has most of the time a kink. To uphold this mode, you would need to have a solid anchor in the middle, which is actually possible with a bottleneck slide. But without such an obstacle, the kink would immediately give way as soon as both sides start to get out of sync. The vibration would thus actually look like this (shown with a pause to highlight the original waveform)

You see here that the “individual modes” in each section actually mix to a mode on the whole string. But that mixed mode has neither a frequency of ³⁄₁ nor ³⁄₂ the fundamental, rather it is a particular superposition of all the integral multiples of the fundamental:

Here's the code used to generate the animations. You need the free Haskell platform to run it.

The problem is at the beginning, when you say:

So any diagram where you have a length marked as an interval will lead you to wrong results.

There's another point that the other answers haven't specifically mentioned. A "standing wave" is always the superposition of two (or more) travelling waves. Energy is travelling from one end of the string to the other and back. You only get a standing wave when the travelling wave is an integral or half-integral fraction of the string length (depends on whether the ends are 'closed,' i.e. hard stop, or 'open', i.e. flapping in the breeze). When the two travelling waves have nodes and antinodes at the same locations, you get the standing wave pattern. Remember, the string at an antinode isn't always sitting ata maximum displacent: it's vibrating with maximum amplitude there.

So when you create a node by touching the string at some point, you are requiring the travelling waves to have a node where you are touching in addition to nodes or antinodes at the end of the string. That's why you can't get the asymmetric "1/3 on one side, 2/3 on the other" pattern -- it isn't self-reinforcing and will decay immediately.

The diagram is completely wrong. In fact, the relationship that you're trying to draw between the division of the string and the notes is fundamentally flawed.

A string plays a single fundamental frequency at a time. How it's divided up determines the frequency played. So a sounding length might play a certain interval above the pitch played by the open string, but that does not mean that the string when divided up is somehow divided into intervals that add up to some kind of interval.

Also, you can't add sounding lengths and correlate that to adding intervals. The "long" section in no way at all represents either an octave or 2 fifths. It doesn't work like that at all.

I think the issue here is your understanding of physics and stationary waves. What you have when a harmonic is plays is indeed a "stationary wave".

Where the finger is placed causes "node" to form which in this type of wave is a location of no movement. This would be where the 1/3 mark is. An antinode is the location of the greatest movement where the crests are.

The wavelength of that wave is equal to the side you labeled "Long".

The short side does not have a wavelength of its own. It is part of the whole wave. The short side is not any interval on its own.

This site explains it in greater detail.

We are idealizing so we are ignoring the effect of tension on frequency of a string by considering the speed of sound in the air. using a little algebra we see

f is inversely proportional to λ, meaning when the frequency is multiplied by a number the wavelength is divided by the same.

If we manage to produce an A4 on a string 1 unit long. In order to double the frequency (or produce a P8 over the open string) we have to divide the length of the string by two.

to get two octaves above we can divide by 4.

Now what happens when we divide the string into thirds?

Well since it is inversely proportional we get a frequency of 3 times higher.

E6 = 1320Hz. This is the pitch when played as a harmonic. In which case the new wavelength is actually 2/3 of the open string.

Remember the wavelength for a stationary wave is not the distance between two nodes but double that.

So your errors are as follows:

You are considering the short section as a separate "wave" with it's own length. it isn't.

There is no harmonic that is not at least an octave away from the fundamental.

I understand why one might thing a dividing by 3 would produce a P5. When a string is stopped only one side is allowed to vibrate. In addition, no node is produced. So if someone stops a string and plays it one third the distance from the nut (the point labled 1/3 in the image) then resulting wavelength is actually double that of the harmonic on the third. And remember if we double the length we half the frequency so the resulting pitch is E5.

However if were stop the string at the node nearest to the right of the string in your diagram, we get the pitch that matches the harmonic.

Having spent a long time studying the question, and answers, the OP may have studied physics/maths, but maybe not music. One of the OP's premises is that two P5s = P8. That isn't so. Two P5s = maj10. Possibly the thought is that a P5 is exactly half an octave - P8. Half an octave is a tritone, which musically often doesn't sit well in harmony. So half an octave, scientifically/mathematically is dim5.

The diagram is confusing (confused?) showing nodes, which do relate to splitting the whole string into equal parts. And whether one presses or touches - (to produce a harmonic)- the central node, the new note will indeed be an octave (P8) above the fundamental. However, only pressing it at its 1/3 point will produce the P5 sound; only touching it at either of the 1/3 nodes produces the P5 sound an octave higher: a 12th interval. Now, I'm confused...

44
WHY do harmonics happen?
9
What causes overtones at harmonic frequencies in an instrument?
1
Help understanding frequency ratios and string length