I was having a thought at why does E on 1st open string and E on the 2nd string, 5th fret have a different timbre or colour if you like? While them both being a single E in one octave while establishing a an interval they are not alike in colour.

I was also wondering whether a chord such as E with two open Es and two Es, one of which is on 5th string, 7th fret and the other on 2nd string 5th fret with G and B have basically only 4 notes instead of 6, because the upper two are one note and the lower two are one note.

A plucked guitar string or any string for that matter will vibrate at some given frequencies. These frequencies will depend on the length of the string, the density, and the tension. The string is held in place at the ends by the instrument, so here the amplitude is zero. All waves that end up having zero amplitude at the fixed ends are valid harmonics. See picture from Wikipedia below: 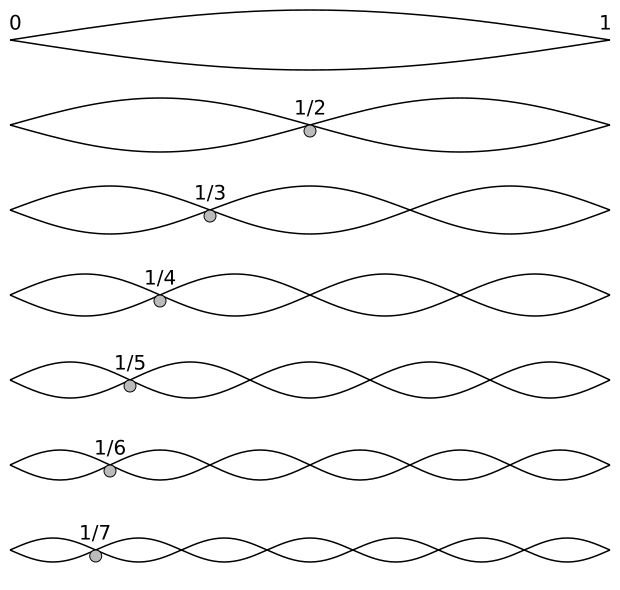 The first harmonic is normally the loudest one, which we would tend to identify as the tone/note played. Then we have the next harmonic with double frequency, the third with three times the frequency, and so on. So the harmonics or overtones are integer multiple of the first tone.

The characteristics of the string will determine the strength of each harmonic, and the rate at which each harmonic will decay. The string tension, length, and thickness are probably the three most important factors, but the material type, and other things play a role too. The instrument body will also affect the strength of each harmonic and add some resonance. The harmonics are the reason you can hear a difference between a piano string, a guitar string, a bass string, and so on. They work on the same principles, but the combination of harmonics is what sets them apart. On a guitar the same principles will determine how a note will sound depending on where on the fretboard it is played.

Voicing a chord with a note presented twice on different strings is no problem, if you think it gives the right feel and sounds good. That is probably a question of artistic freedom :)

Open strings will always sound different from fretted notes. Another reason is that the string gauges are different and that affects the timbre, too. There are many different places to play that exact same note on a guitar (many more than 6, including various harmonics!) and each will sound different.

In addition to the answers already given, the main reason (I would say) that the open (top) E string sounds different than the same tone fretted on the second string is that the acoustical end of the top open string is more rigidly held by the nut than the end of the second string, which is pressed down behind the fret by the finger. This makes the sound of the fretted note relatively more damped, and it will also decay faster.

Not the answer you're looking for? Browse other questions tagged guitar notation sound fretboard or ask your own question.

4
What do I need to learn before I can alternate tune my guitar?
4
Is it OK to play guitar with capo on 5th fret, since I have arthritis in thumb & finger joints?
7
Alternate tunings on a 12 string guitar
26
Why do harmonics played on guitar sound lower as you move to higher frets while fretted notes sound higher?
5
Best name for a chord consisting of D - E - F?
3
Learning notes on the fretboard
3
Describe a chord shape?
2
Which strings do I pick when arpeggiating a G chord on guitar?