In some of Bach's works, this ornament, which contains twelve 32nd notes, seems to start once the above three 16th note have stopped, basically playing them during the rest...

At least that's the way I am reading it, in theory.

However, when I hear it played by other people, it seems there's an overlap, which I am guessing is to avoid breaking the rhythm of the right hand.

Bit confused so here's my question:

Do I play the ornament with an overlap or do I play them during the rest as I read it which means playing them super fast? 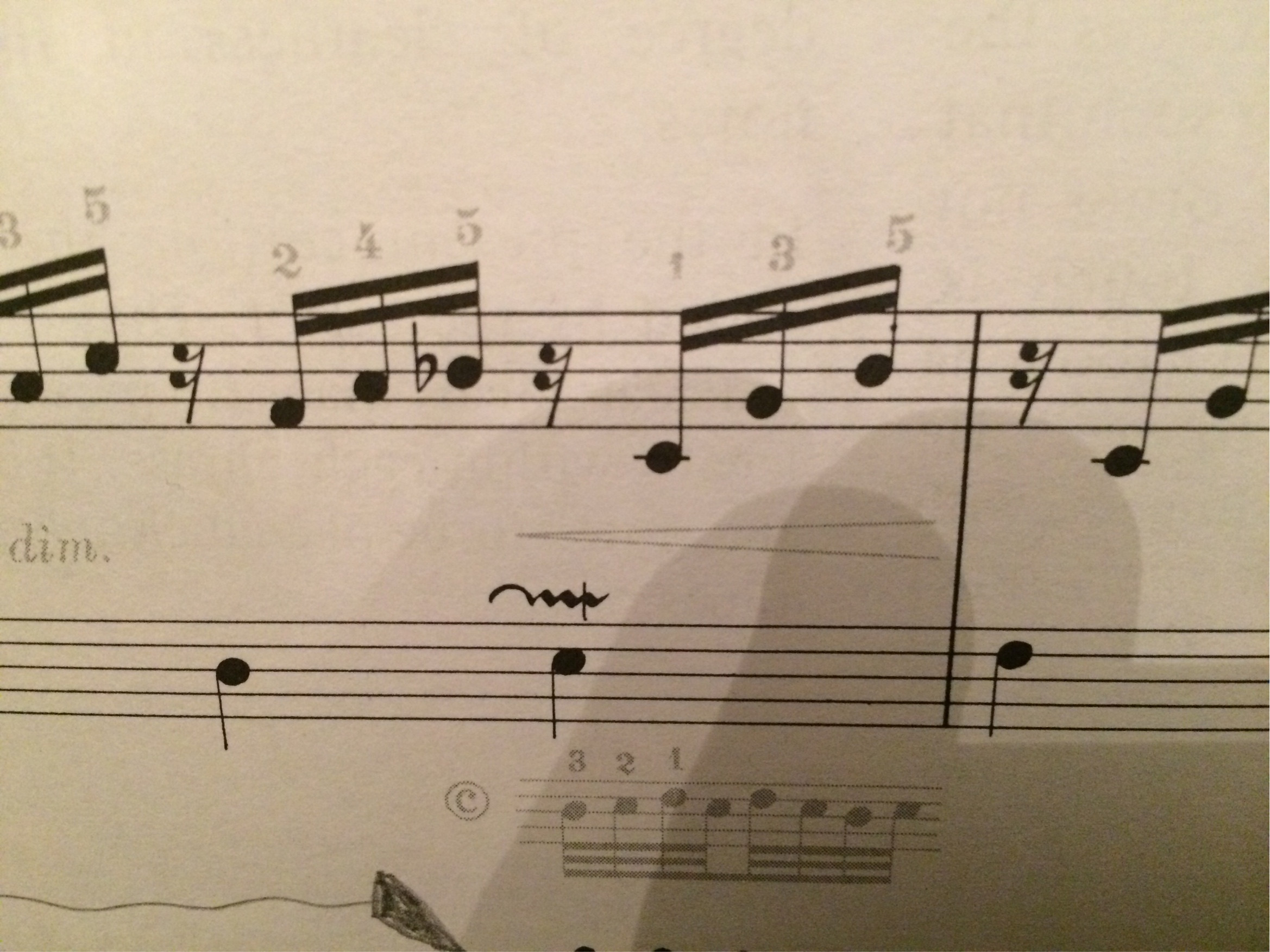 Do not take notice of the described ornament in faded script, this is the one I am using for authenticity: 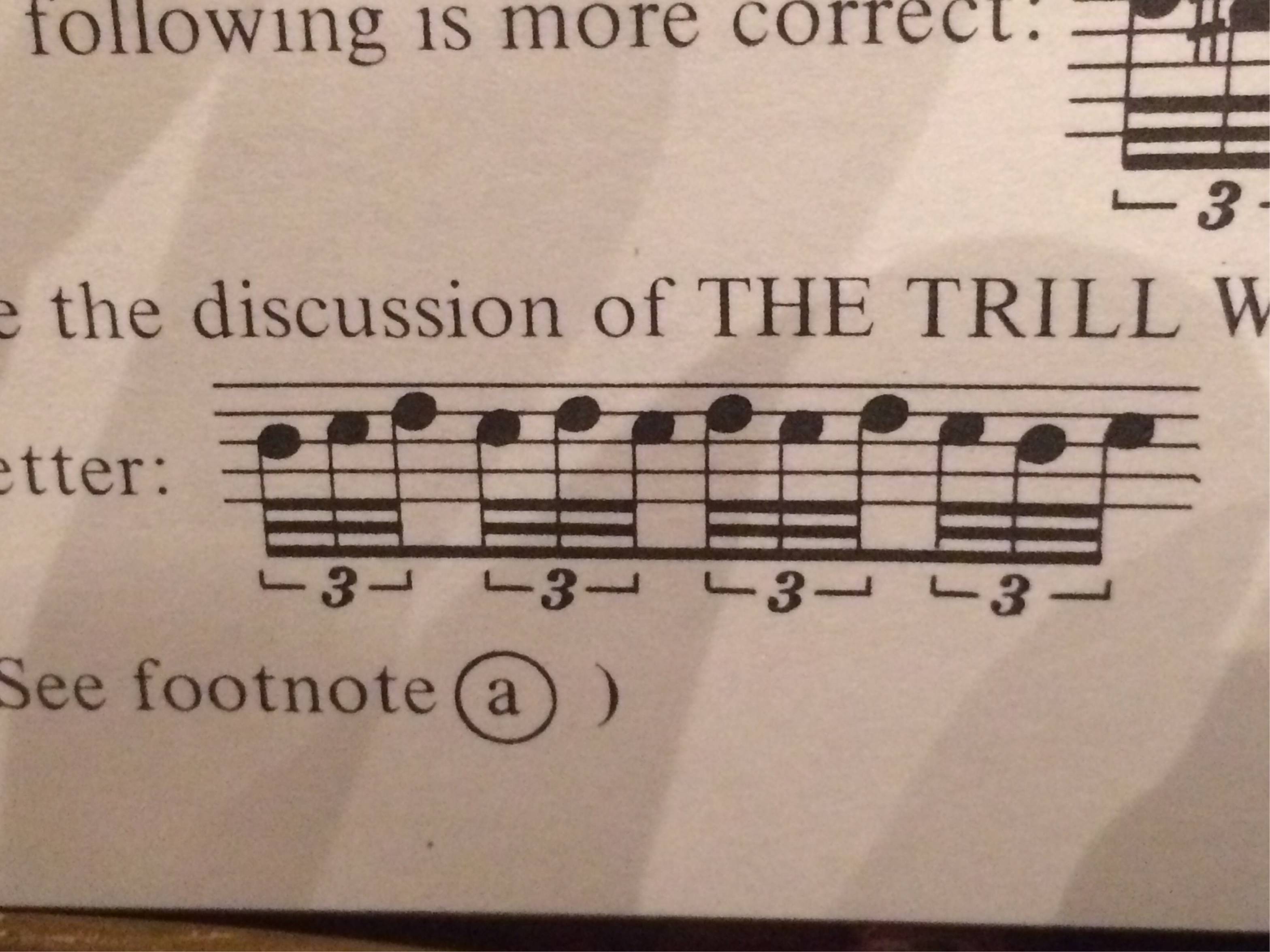 EDIT I am not looking for the scholars arguments about ornaments, I am looking for the pure theory here: as I read it, an ornament should be played during the rest of the triplet notes but most people seem to overlap.

Is it because there are too many notes in the ornament or because it's not physically possible or even sounds too fast?

The well known "explanation of ornaments" by JS Bach himself shows that this is a long trill, which occupies the full duration of the ornamented note. It is not a short trill (pralltriller, or mordent).

You don't give any authority for your assertion that "an ornament should be played during the rest of the triplet notes" - and I don't expect you will find any. (And the right hand notes are not triplets here - they are ordinary 16th notes).

The number of notes in the "correct" interpretation depends on the tempo. In general, ornaments sound better if their rhythm does not match exactly with the other parts - which is probably why your picture shows triplets not straight 16th notes. Of course the number of notes you can play depends on the tempo of the piece - it would be perfectly reasonable to play this ornament with 10 notes, if 8 seems to slow and 12 seems too fast, but most of the written-out examples tend to use "simple" rhythms which are easier to read. There is no reason why the ornamental notes should all be played at the same speed - in fact trills often sound better if they accelerate towards the end.

If these details could have easily been expressed in standard notation, there would have been little need for "ornaments" at all - composers could have just "written exactly what they meant to be played"!

In my experience, it will be really difficult to come up with an interpretation that satisfies everyone; even Baroque performance scholars, who have spent countless hours studying Bach's own manuscripts sources, will have disagreements on how these are performed. Unfortunately, we just can't know what he meant with 100% accuracy.

As such, use your own musicality to determine which you think best fits your own interpretation of the work. Try to listen to as many recordings as you can to see what other performers do; maybe you'll settle on one of their interpretations and skip over what you've shown here.

The shake (trill) should be held out for the full duration of the note, in this case the full quarter note. This does overlap with the other part.
If the intention was to have a shake during just the 16th rest, then the transcription would have a trilled sixteenth note followed by a dotted eighth rest under the top line notes.

Not the answer you're looking for? Browse other questions tagged theory piano ornaments or ask your own question.

2
When would Bach start an ornament- just before the beat, or right on it?
4
Ornaments in J. S. Bach's 4th prelude

4
Ornaments in J. S. Bach's 4th prelude
9
Tonality and Rules
12
What does a mordent written to the left of a note mean?
4
Theory vs Practice
9
Reinforcing meter when dealing with alternating 1/8 and 1/16 notes and rests
0
How to perform these ornaments?
0
Ornaments in ABRSM theory, start on the note or the note above?
0
Thumb position in Piano playing fast octaves - Position to prevent injury in first thumb joint
4
How to beam multiple voices correctly