How do I rationalize this interesting chord in Mozart K. 331?

Lately I've started learning some basic music theory and I have been trying to rationalize some of the interesting chords I have heard of from famous pieces. Here is an example of which I am not sure if my understanding is correct.

Below are bar 11-12 from Mozart's Piano Sonata No.11 in A major, K.331. I have marked the chords using Roman numeral notations.

The blue text shows a naive marking. To me the ♯iv° chord gives a warm and sweet shifting feeling. I found that if I think of it as an applied chord (by tonicizing V) then the last three chords becomes a (vii° - IV - I) progression. If this is the case I was wondering how come the IV chord, as a pre-dominant chord, appears after the dominant chord vii° instead of before it? Why would the progression still sound inevitable when the strong dominant -> tonic progression is broken?

Per @Dekkadeci's answer I revised the analysis as follows. The final three-chord progression simultaneously resolves two tension (cadential I chord to V, and on the V scale, dominant vii° to tonic I. 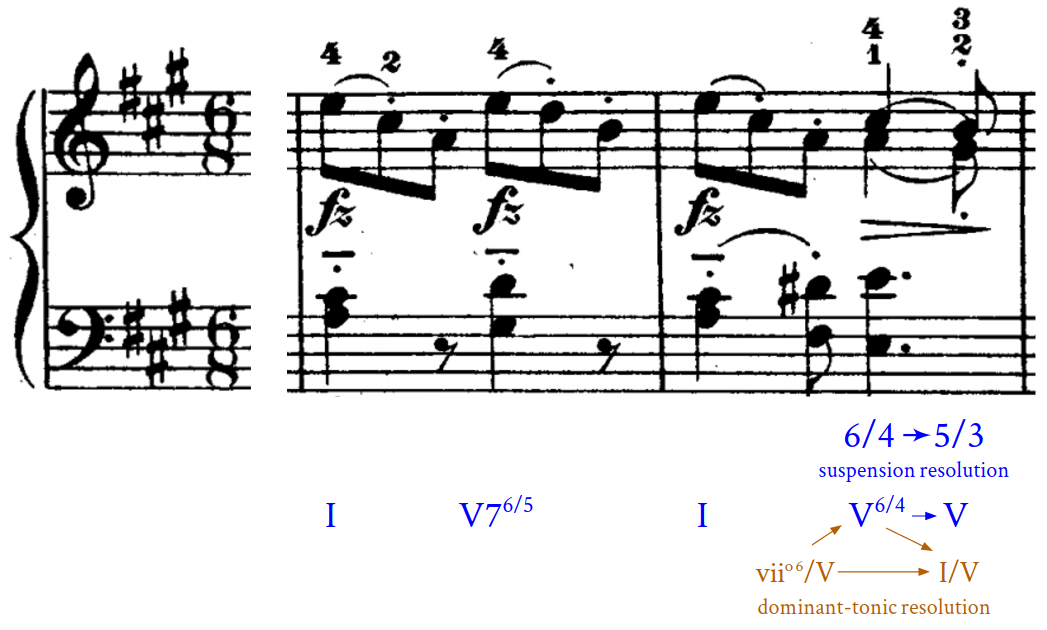 If this is the case I was wondering how come the IV chord, as a pre-dominant chord, appears after the dominant chord vii° instead of before it? Why would the progression still sound inevitable when the strong dominant -> tonic progression is broken?

Due to the E as a root instead of an A, the second last chord is not formally a I or a plain IV/V chord, but it is actually a I 6/4 chord. The I 6/4 chord is treated as a pre-dominant chord that must be immediately followed by a dominant-function chord (often V, just like the last chord). Its pre-dominant function is so strong that one of the theory books I was told to use in harmony class labels it as V 6/4 instead.

You ask how to rationalise the progression. Here's how. It's a bare-bones B7, the dominant of the following chord, E, to which it resolves, delayed by a suspension. There's no room for all the notes of B7 in 3-part texture, but that's no reason to analyse it as something unnecessarily complicated.

I'm not exactly qualified to give you the classical language answer but conceptually I hope I point you in the right direction. I had to look up the difference between an appogiatura, a suspension etc. etc. In Jazz we tend to call all resolving non chord tones suspensions, but I'm pretty sure in classical music a suspension has to come directly from the previous chord rather than be just any resolving non chord tone (which I believe in classical is strictly an "apogiatura".) I could be wrong with my terminology here, but hopefully that won't bog you down; the point is I'm talking about resolving non-chord tones!

Anyway, you are right that the diminished chord is absolutely tonicizing the V. The reason the A chord in its second inversion works here is that it ends up sounding like a suspended E chord, rather than an A chord.

The diminished chord resolves to the E in the bass, and then the the A and C# are apogiatura that resolve downwards to an E chord (it has a certain plagal cadence feel to it, but it's really an apogiatura.). To give an example without modulation, check this crappy midi thing I just whipped up http://onlinesequencer.net/425519 . It's progression ending in a perfect cadence in A, but the ending I chord has resolving D and F# in it.

To illustrate the point, I added an F# apogiatura to the passage you gave. http://onlinesequencer.net/425524. The point is, an F# obviously isn't in an A chord, but doesn't sound at all out of place here; it's performing the same function as the A and the C# resolving downwards to the E chord.

You could also put a B above the E in the bass and not change the harmony (although it's a bit of an ugly voicing).

The second chord could easily be the leading tone chord with the E functioning like an escape tone. That big jump up and the step down is typical of an escape tone.

The d sharp that resolves to an e in bar two gives the very real impression of a leading tone resolving, Im thinking E major. The notes in the top two voices of the last beat just look like suspensions from the previous beat

Not the answer you're looking for? Browse other questions tagged chord-theory chord-progressions or ask your own question.

11
How does it make sense to leave the root out of a chord?

1
Bass chord progressions in "Killing me softly"
13
How do you write successive, non-functional chord progressions?
7
How do you analyze this Mozart Piano Sonata?
4
Why is the G major to Bb major resolution so strong?
3
What is the functional role of the subtonic chord?
1
Can we understand subdominant/dominant chord functions in terms of them being tonics of other keys?
2
How is D7 functioning here? Applied chord both kind of does and doesn't fit
12
Alternatives to scale-centric beginning music theory?
14
Is this chord from Bach's C major Prelude G+ or Cm?
3
How to harmonize ^3 ^2 ^1 in minor while tonicing III