what does a chord/chord mean? like V/V or something

I don't know if this is substitution, or simply saying it's the V of the V chord, it would be helpful if someone could explain this to me.

In Western tonal harmony, the most important chords are the I and V, the Tonic and Dominant chords, respectively. The V chord being the most dominant route to resolve back to the I chord.

So, if you’re in the key of C major and play a V/V, you’re playing a D Major chord, which is borrowed from the key of G major. 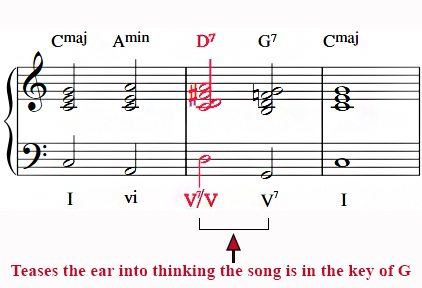 They are secondary chords and they are used in analysis to indicate that a chord has a relationship to a chord in the progression that can be view from another perspective. Specifically any chord with V or V7 in the numerator like V7/V or V7/ii is used to denote a secondary dominant and V7/V will pull you to V in whatever key you are in and V7/ii will pull you to ii in whatever key you are in and both would be V7 in their own key respectively.

I am a student composer in the Mannes School of Music.

The whole notion of chord progression as varied due to taste. In simple terms I like is the "home base" of the piece. Traveling outside the house is like exploring other chords.

V can also be referred as the "dominant" chord. In music, V "resolves" to I naturally as it is pleasing to the ear. (Take Bach's Chorale in C major as it resolves from G (V) to C major (I) -

However, secondary dominant chords a bit different. Simply, we start out with the tonic chord (i.e. C major for simplicity). A dominant chord's role is to resolve back in the tonic. But, what if we want to resolve into another chord other than the tonic?

This is when a secondary dominant chord comes into play. Its function is to resolve into a chord other than the tonic. We will call the new chord we want to "arrive", or "resolve in", the target chord. We will pick Bb Major as our target chord.

We are not done yet, though. Many composers like to add a 7th interval to the secondary dominant, as it allows more tension and a bigger resolution. So, our secondary dominant chord would have the notes (F-A-C-Eb).

In conclusion, a sequence with this particular example of a secondary dominant would be C-F7-Bb, or I-IV7-bVII

If this is a bit confusing, a secondary explanation may be helpful: https://music.tutsplus.com/articles/secondary-dominants-and-how-to-use-them--audio-2663

Other chords act in a similar fashion, some building up the harmony of the piece, some creating a dissonance, and some resolving to a more "pleasant" chord. For example, a very simple chord progression is I-IV-I64-V-I. The progression starts of at "home base", ventures out to IV, which strikes out to the ear. It then reaches I64 (or G-C-E if we are in C major) in a grand fashion, travels to V, which resolves back home to I.

The concept of these simple progressions is inside the big umbrella of music theory. Bach (and sometimes Mozart) give great examples of these progressions, and what chords mean and sound like.

I hope you found this helpful!

9
What is a "Chord of Nature"?
2
passing chord preceding 4th in minor scale?
2
In a classic 12-bar-blues pattern, what are the changes for a "chunka-chunka" rhythm?
2
chords, chord theory, and bass lines
1
Chord that does not fit into any scale
1
Tritone substitution in minor, just change the root or change the chord quality too?
2
Chord inversions? What does 'C' mean one to play?
0
Help Understanding Chord Progression
5
What does "quiet chord, a wide blue one" mean?
3
Jazz vs Classical interpretation of this V7c vs iv-m6 chord in a common chord progress?