How would you calculate the name of this C/A# 7th chord?

I'm playing the following voicing of a C7 chord on the guitar:

Strictly speaking this would be denoted as a C7/A♯ slash chord.

But I'm trying to figure out what voicing name this would have.

Is this just a 3rd inversion or some other voicing name?

Let me explain why I'm confused...

A C7 in close position would be:

For me to construct the voicing shown in the image above, I would (in a practical sense) see that I needed to drop the ♭7 by an octave so it was played on the D string of the guitar. Which would then require me to move the root (C) up an octave (as I couldn't play both the ♭7 and the root on the same string).

In doing that, from a degree perspective, what we have now is:

Because the ♭7 is now in bass position, this suggests the voicing is a 3rd inversion of the chord. But the remaining degrees are not in order. Does that matter?

On a side note: I've been led to believe there are scenarios where a voicing could be called something like "drop n of n inversion", is that correct? I don't think that would apply to my primary question above. But I believe what I would've called a "drop 2 of Cmaj7" (just for example) could also have been called a "drop 2 of Cmaj7 2nd inversion" because the particular voicing I would likely use on the four high strings - d,g,b,e - would have the 5th degree in the bass position, which by definition is kind of like a 2nd inversion of the chord...

The lowest note played in a chord denotes its inversion, regardless of the order of the higher notes, Thus, in C7, root position has C at the bottom, 1st inv. has E, 2nd inv. has G and 3rd inv. has Bb. The other notes need to be there (with the exception on occasions of 5), to constitute the named chord, of course.

On guitar there is sometimes a problem in that certain voicings cannot comfortably be fingered, thus a 5th may need to be left out, and sometimes it makes sense to double other notes, usually an octave apart.

There is a naming system called 'drop x' which you are aware of, and this is how the voicing you mention gets named.

Incidentally, you mention Cmaj7, which on guitar at least, doesn't sound good with a C note on the top string. The other inversions work well, but that one just doesn't seem to sound convincing.

Forgive the slightly pedantic answer, but this could be an A♯ in the bass and not a B♭. Spelled with an A♯, this becomes the "root-position" German augmented-sixth chord A♯–C–E–G.

This is a relatively rare chord in the classical style (let alone in a popular style), but I think it's worthwhile to include it as a possibility.

Here are the drop-2 voicings of F7 on the top four strings; I chose F7 instead of C7 for this illustration since this makes it easy to start from root position and move up the fretboard to the subsequent inversions:

The shapes for C7 are the same as those above for F7, and you can see that the shape of the final F7/Eb matches the shape of OP C7 moved from the 8th fret to the 13th fret. On a chart I would probably only write F7; if the inversion really matters I would write, e.g., F7/Eb. But I wouldn't write out "F7 drop-2 in third inversion"; if the particular voicing is that important, I would just write it out on the staff.

Strictly speaking this would be denoted as a C7/A♯ slash chord.

It's an open voicing. In terms of "drop" voicing it's "drop 2" voicing. To get "drop" voicings, number voices from 1 starting with the top voice going down, then "drop" voices by lowering them by an octave, like this... 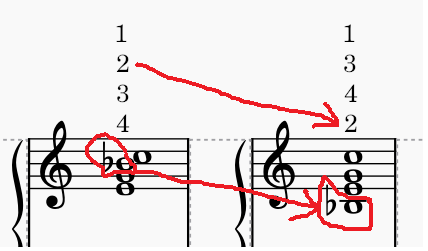 Because the ♭7 is now in bass position, this suggests the voicing is a 3rd inversion of the chord. But the remaining degrees are not in order. Does that matter?

Not in regard to the inversion. For that you only need to know which chord tone is in the bass.

After the bass, the arrangement of the remaining chord tones in various octaves will determine first whether the voicing is "close" or "open", and if it is "open", the "drop" terminology is the only standard for distinguishing specific spacings.

In terms of basic harmonic function only the root progression matters. All the rest of how individual chords are voiced is a matter of taste of how you like the intervals stacked vertically or a matter of voice leading regarding how chords connect in a progression. For example, any voicing of C7 to F is just functionally dominant to tonic, but C7/Bb to F/A brings in voice leading - specifically telling how the bass moves - then the specific voicings of the upper voices is mostly a matter of taste, unless they're specifically notated in some way. Lead sheets don't normally give voicings.

It would be interesting to have this chord in a context, e.g. G or Em.

now you can say for easier reading this is C over A# but indeed this was A,C,E,G -> A#,C,E,G (chromatically transformed), so we have a dim3, dim5 and dim7, A# dim,dim,dim or A# diminished double dimineshed. I'm afraid nobody would understand this labeling.

It's simpler to describe it like Richard says as a Gerd chord , developed historically from Am7 (1st inversion=C,E,G,A)-C,E,G,A#, in "root position", an altered chord in G major or e- minor, functioning as a secondary dominant.

Inversion naming depends only on what the lowest note is. It tells us nothing about the voicing. So yes, it's C7, 3rd inversion.

If you wanted to describe the voicing, 'raise 2' might seem more appropriate than 'drop 2' :-)

Not the answer you're looking for? Browse other questions tagged guitar chords chord-theory chord-inversions or ask your own question.

5
Identifying "Drop chords" from a given voicing
6
What makes 'Drop 2, Drop 3' in chord nomenclature?

14
I need help understanding the concept of chord inversions.
1
Fm7 Drop 2 1st inversion confusion
2
What is the name of a chord with the root note played twice?
0
How does this drop 3 voicing work?
3
Chord inversion (and voicing) naming
0
How to identify the chord progression and a specific chord
3
G-D-A naming convention
3
How would you voice a G2 chord on guitar? Better yet, what even is a G2 chord?
1
What is the chord consisting of G F# A D?