So I have seen the blues progression below called "Basie Blues"

One basic method I have for walking bass says play the root on beat 1, any chord tone on beats 2 and 3, and then approach the next chord root by half-step. The second method shows walking bass by scale ascending and descending for the progression ii7-V7-Imaj7.

When I try applying these methods to IV7 - #iv dim7 - I7 the results don't sound right to me. I tried a simpler arpeggiation |Bb D F Bb|B B D F|F A C C#| and that sounds ok, but it's not really the method given above.

Can anyone offer advice or typical patterns to use? I'm just beginning to learn blues/jazz piano.

Also, keep in mind I'm playing piano not string bass, and I don't know if there are unique approaches for piano.

I accepted an answer so I won't answer my own question, but I will add this bass transcription of 'H and T Blues' which is essentially the Basie Blues progression. Note that the bar 7 chord is written with slash notation to show that the 2nd inversion is used. That matches @StevesOnBass's answer, but I like having a transcript from a great player. 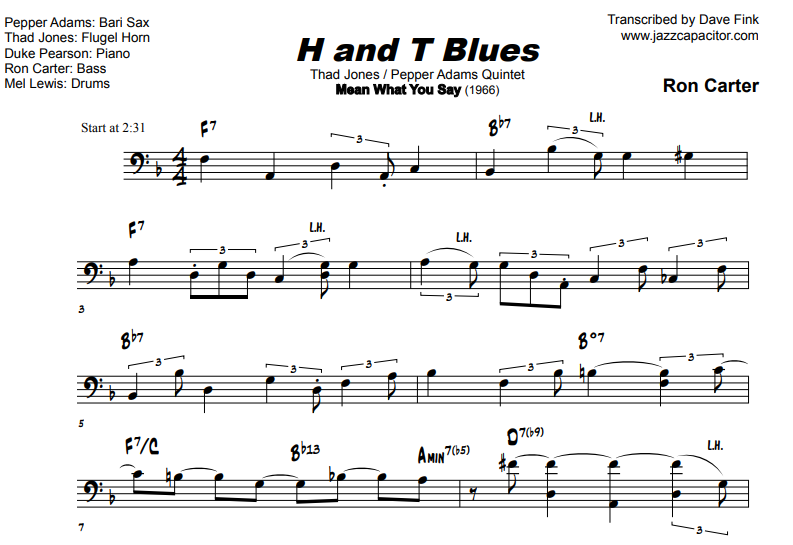 And for good measure, another from Walter Page, Lady Be Good...

...the problem with finding these was that I was looking only for things titles "Basie Blues." 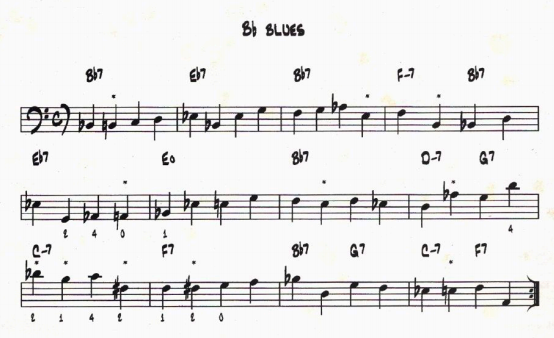 The #IV Dim leading to I7 / 5th in the bass is very common, and strong bass line construction. There are many other ways to outline the chord changes you mention. Ideally you want to have chord tones on Beats 1 & 3 as a starting point.

A tritone usually sounds fine if the next note(s) is/are within the tritone, but that doesn't work here because the following chord is F7 so you would get a fairly lame sounding repetition, or near-repetition, of the same note F with two very different functions - the 5th of a diminished chord and then the key note.

Try something like B D Ab E | F for the Bdim7 chord, if you want to stick to your "rule" and have a semitone before the root of the next chord. (There is still a tritone from D to Ab, but the E and F are inside it.)

You might want to use the D-Ab for the Bb7 chord as well, to set up a repeated pattern: Bb D Ab Bb | B D Ab E | F. The third and seventh are the most important notes that define the "colour" of a chord. You could use the same pattern for more of the 7th chords, if you like.

Or replace the Ab with a non chord tone and "slide up" to the F, for example B D Eb E | F.

Or you could imitate a pitch-bend on the piano, and play two notes together a semitone apart, for example B D Ab G/Gb | F "sliding" down to the F - assuming you are swinging the 8th notes, so the G/Gb is short (and played fairly softly.)

Don't get too hung up about sticking to the "exact" notes of the written chords. This is the blues, not classical counterpoint that Palestrina would have approved of!