I am writing a piece of music that has a lot of triplets used as ornaments. Is there a symbol like this:

that will be played as as a triplet on the note?

Example: note is G. With symbol over it, it is played as G-F-G (in a triplet). Does this exist?

If you want single-pitch triplets, use the abbreviation notation. There are examples on that page for triplets. Here's an example I tripped across on the webz: 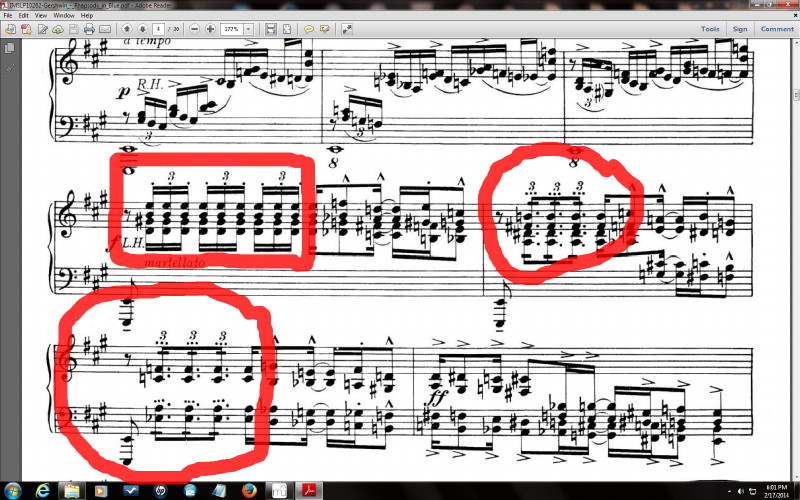 The red circles helpfully point you to triplets both written out and abbreviated; they are played the same way.

And no, there is no symbol for groups of 3 notes which are not the same pitch. It should be reasonably obvious why.

The short answer is "if you want a triplet, write a triplet".

Ornament signs are not "exact" prescriptions for anything. For contemporary music they not used much, except for trills. Of course they were common in baroque music, but the interpretation was intentionally left up to the performer to a very great degree.

The sign in your example usually meant a short trill: not necessarily starting on the written note - it might start on the note above - not necessarily only three notes long, and usually with the final note longer than the others.

There is a similar sign with a vertical line through it, which does mean three notes, i.e. the written note, the note below, and the written note repeated, but (1) "the note below" might be interpreted as "a semitone below," i.e. F# not F, and (2) the first two notes are short compared with the third one - it's not a triplet rhythm.

Also, in any period after the Baroque, such ornaments are often interpreted (rightly or wrongly) as being played before the beat, with the final note on the beat - which certainly isn't "a triplet".

Not the answer you're looking for? Browse other questions tagged notation rhythm ornaments tuplet or ask your own question.

0
How do I notate for the sostenuto pedal?

7
Notating 6 (or more) triplets with a single beam?
8
Triplets don't seem to add up
4
Notating lilypond triplet inside of slur
8
History of triplets
8
How to write 2 crotchet (quarter note) triplets when they don't start on the down beat?
5
What does the plus (+) ornament mean?
10
Notation of triplets in Bach’s *Orgelbüchlein*
11
Why is there so much dispute about how ornaments are supposed to be played in classical music?
2
What is this type of ornament, and how should it be played?
0
triplet in tuplet