The second movement (Andante con moto) of Beethoven's Fifth Symphony begins serenely in A-flat major; then, almost without warning, it switches to a triumphant theme in C major. The modulation is swiftly and effortlessly done. So, how is it done? I've been studying the relevant part of the score to fathom out the trick. This is the passage: 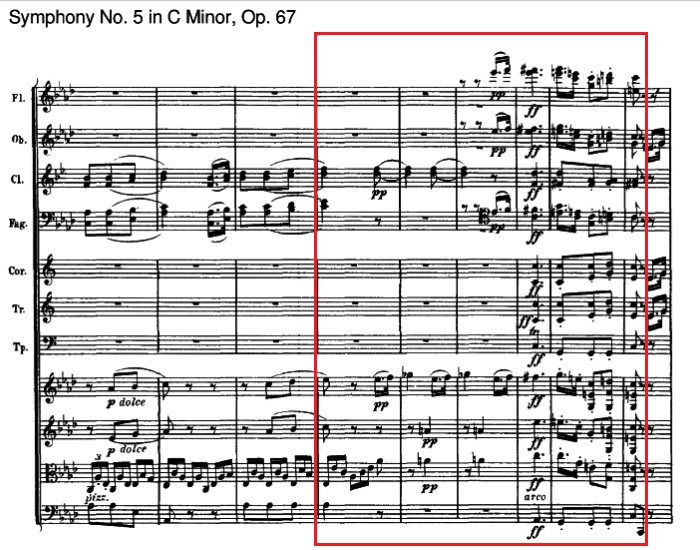 (By the way, the horns and trumpets are in C; the clarinets are B-flat.) There appears to be two intermediate chords involved: A diminished seventh, followed by A-flat dominant seventh. So the harmonic progression appears to be:

My question is: How is this progression represented in Roman-numeral notation?

The chord progression in C major is called a "German sixth". There are also "French sixth" and "Italian sixth" chords which are variations of the same basic idea. See https://en.wikipedia.org/wiki/Augmented_sixth_chord.

Beethoven goes from Ab major, via a diminished 7th chord to "destabilize" the established key, to a chord of Ab7. By re-spelling the Gb as F# this becomes the German sixth chord in C major. The simplest resolution of the German sixth would be onto the dominant (i.e. G), but Beethoven resolves it onto a 6/4 5/3 cadence progression instead (i.e. C/G G7) to give a stronger feeling that the key has changed to C major.

The various "augmented sixth" chords were quite common in the baroque and classical periods (though not used for modulation in the same way as Beethoven's example), but perhaps the effect had become a bit of a cliché by the 19th century, and their usage declined.

Not the answer you're looking for? Browse other questions tagged chord-progressions classical-music modulation beethoven or ask your own question.