What does this squiggly vertical line marking mean? [duplicate] 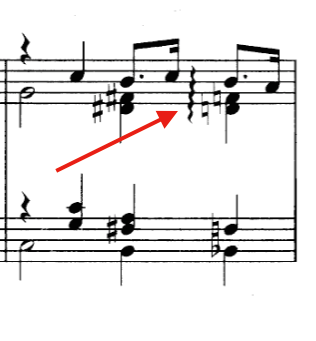 I am wondering what the marking in this sheet music means.

It's a "rolled chord". It means to play the following chord in a slightly arpeggiated way. So you'd play in roughly the rhythm shown but by starting each successive note (usually from the lowest note) slightly later than the previous one. It's kind of a harp-like effect.

So with a guitar chord instead of strumming quickly in a single stroke, you'd slow down a bit and brush across each note in the chord. But it means the same thing on other instruments.

It's arpeggiate - where the notes in the treble clef are played one after another, fairly quicky, like an arpeggio.In fact, it makes a 1st inversion of Bb in the right hand.

4
What is the meaning of this squiggly vertical line symbol in guitar tablature?