The use of the root note in a scale

I found an article on Cyberfret.com showing how to play C major scale :

The Whole Guitar Neck Mapped Out 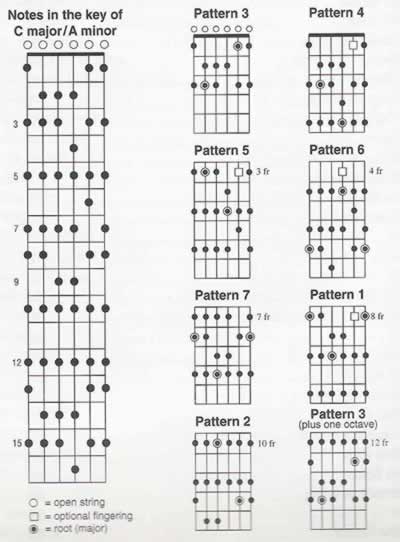 Well, I can guess how to play the pattern number 3 but, what the purpose of knowing the root note ? I can't understand why in all the articles I've read they refer to it ?

The root note is the note you start on when practising the scale.

Melodies played using that scale usually (but not always) start and end on the root note.

Even if a melody doesn't start or end on the root note, the root note will feel like a "home" note for the melody.

A scale (major, minor, etc...) is nothing more than a pattern of notes. The pattern states the distance between them - usually half-steps or whole-steps, but not always.

The root of a scale is essentially the "focus" of that scale, or (as slim said), the "home" for the scale. This can also give you an indication of which scale tones should have more focus than others.

A C-Major scale has exactly the same notes as a D-Dorian scale, or an A-Minor scale, or a B-Phrygian scale, etc...

However, if you are playing a C-Major scale over a C-Major chord, you are most likely going to focus on the 1st, 3rd, and 5th scale tones, as these make up the C-Major triad.

17
What use is knowing how many sharps or flats a key signature has?
2
How can different compositions use C Major?
48
Why does the scale have seven (or five) notes? Why not six?
2
What are ways to use the palindromic property of a palindromic scale?
4
Are all diatonic chords in the diminished scale diminished?
3
Why is there no "half/minor-third augmented" scale?
3
How to read movable scale chart for A minor pentatonic?