How long is an appoggiatura in triple time?

I am currently playing in a baroque group. The question has arisen as to how long an appoggiatura should be in triple or compound meters.

The time subtracted is generally half the time value of the principal note, though in simple triple or compound meters, for example, it might receive two thirds of the time.

Is there a "rule" as to when it should receive one third of the time, and when two thirds?

Although I don't play in Baroque ensembles, my experience with Baroque keyboard music tells me that the appoggiatura takes up two-thirds of the value.

A discussion on Music Manuscript Notation in Bach seems to corroborate this:

The appoggiatura takes half the time of the following note, except when followed by a dotted note. It then usually takes two-thirds of the value of the note.

Thus the appoggiatura (the non-chord tone itself) takes two-thirds of the value, and the chord tone to which it resolves only occupies the final one-third of the value. 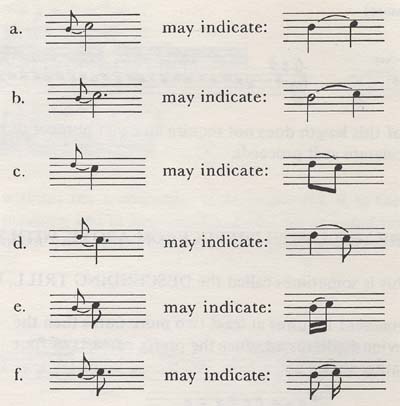 Not the answer you're looking for? Browse other questions tagged ornaments or ask your own question.