Negative harmony: What does it mean to “rotate around the axis”?

By “axis,” we mean that there is a fulcrum point around which pitches are rotated (or "inverted"). In other words, a pitch that is a distance of x above the axis will invert around that axis and appear a distance of x below the axis.

Let’s say we have an axis of C, and we want to invert D around that axis. Since D is a major second (whole step, or two semitones) above C, its inversion will be B♭, because B♭ is a whole step below C.

Sometimes the axis is not a single pitch, but rather the space between two pitches. Let’s say we have an axis located between the pitches E♭ and E, and we want to find how G inverts around that axis. This can be trickier, because we aren’t used to thinking that “G is a minor third and one quarter step above the axis between the pitches E♭ and E.” Instead, we’ll find the interval above the upper pitch and move down that interval from the lower pitch. In other words, since G is a minor third above E (the upper pitch of the axis), it inverts to C, which is a minor third below E♭ (the lower pitch of the axis).

When we rotate around a C/G axis, it ultimately means we're rotating around the midpoint of C/G, which is the spot between E♭/E. (There are other ways to think of this, but this will be the simplest.)

But there's an even easier way to do it! 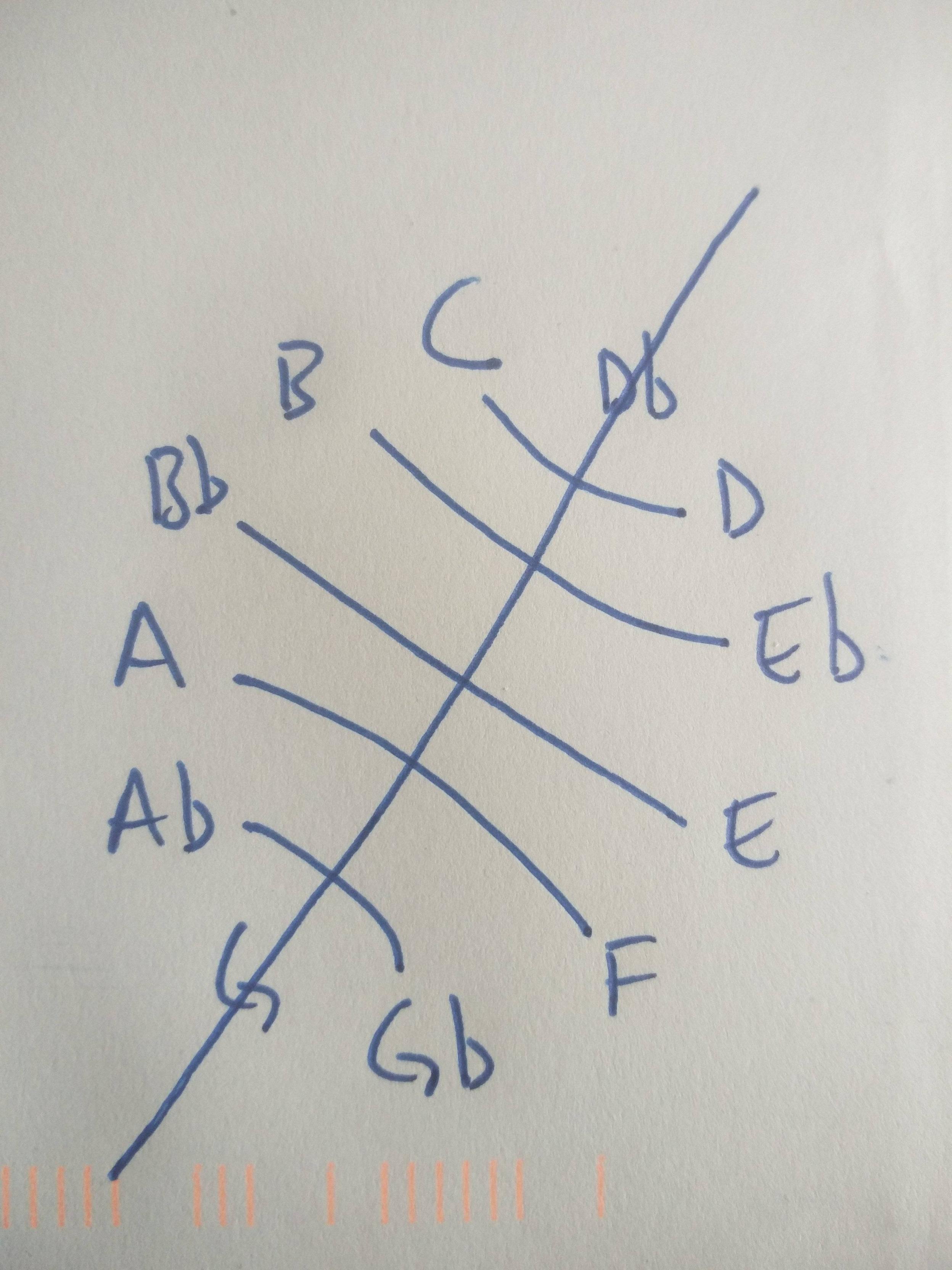 If the axis is between two pitches, the diagram will look something like this: 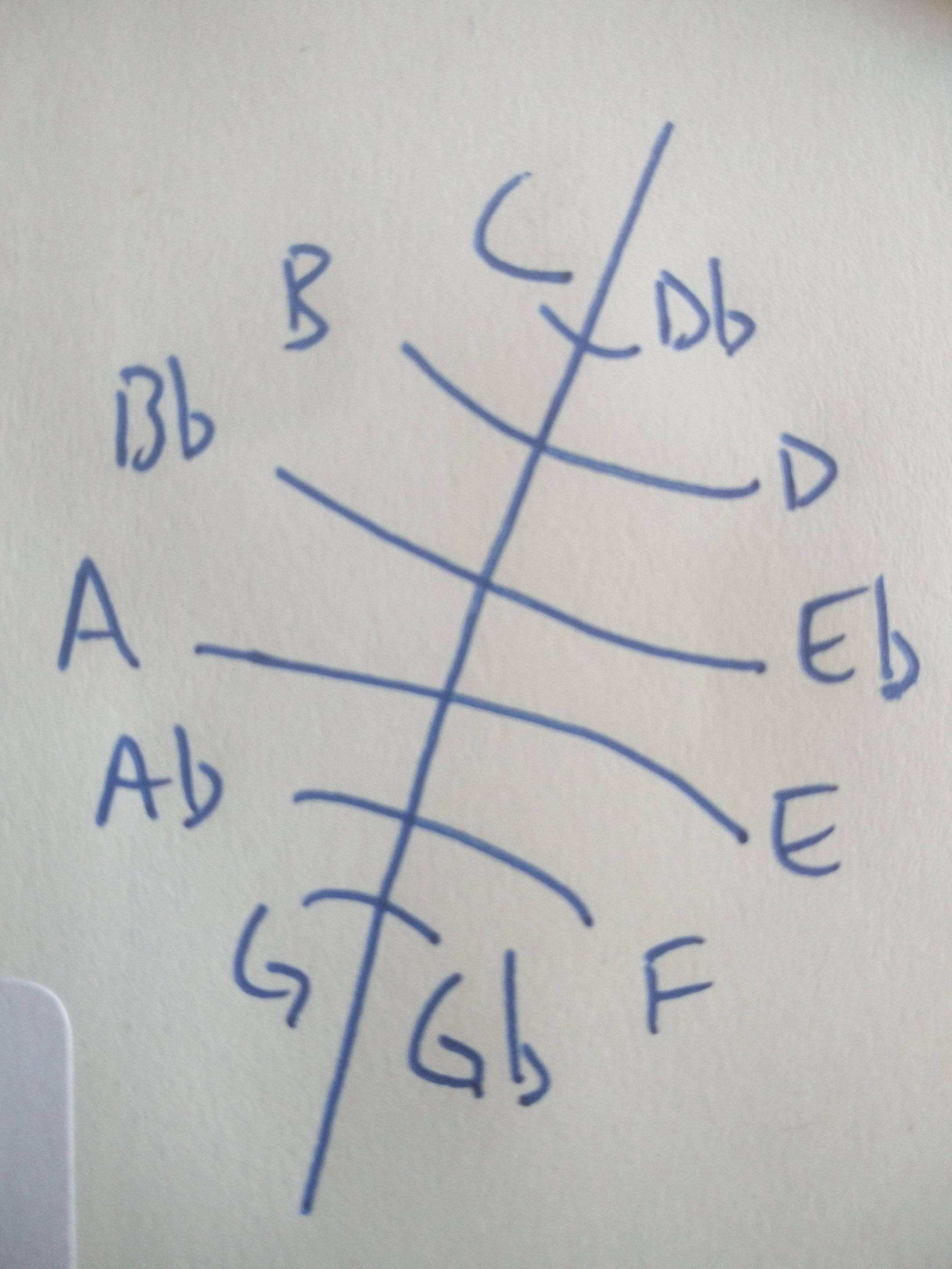 And here we see that E♭ inverts around the C/D♭ axis to B♭, etc.

Note that the decision of which axis to use is up to the composer; there's no reason the axis must be between E♭/E. It could be between any other pair of pitches (or a single pitch), but of course the resulting inverted pitches would be different.

Richard explained the whole thing pretty well in his answer, but there are a few things I'd like to add.

A scale has stable and unstable notes. In a C major scale, the stable notes are C, E and G. The rest of them - D, F, A and B - are unstable. For reasons, it's desirable to choose an axis that makes every note keep it's stability property. And there's only one axis that satisfies this, which is shown here: 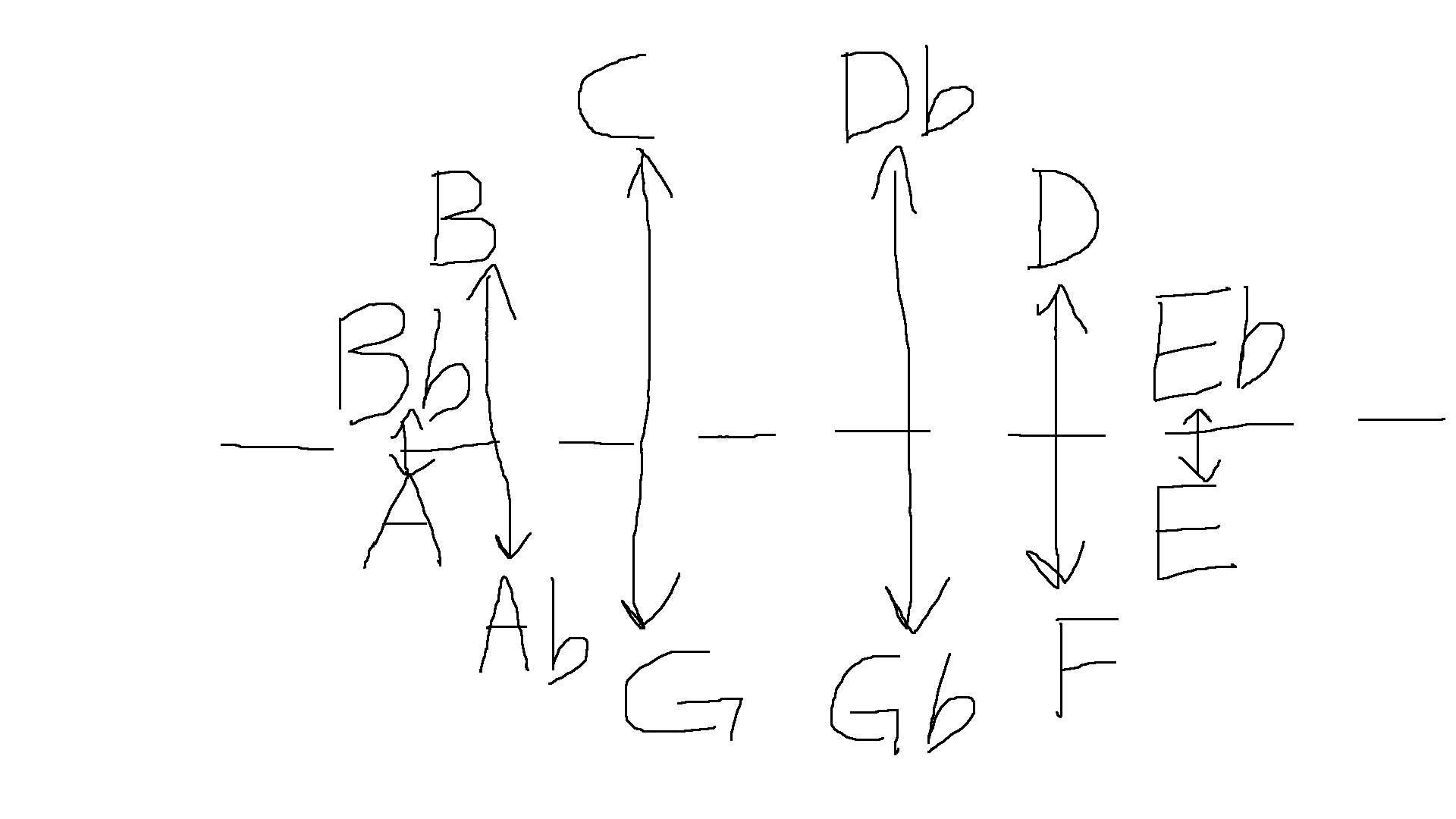 This transforms the C major scale to C minor.

I got this information from this video:

Not the answer you're looking for? Browse other questions tagged theory chords negative-harmony or ask your own question.

1
Does circle division by chords have anything to do with actual chords of music.
2
Why does flipping not keep nice-sounding things nice?
1
Mirror chords theory

42
What does it mean to write a song in a certain key?
10
What does it mean when there are two time signatures
13
What is the correct process for deriving the 'mirror' or 'negative' harmony of a progression?
5
Why is the Mirror on a midpoint, rather than the root note, in Negative Harmony theory?
3
What do the R, 3m, and 5 mean in the Am chord?
5
What does a “repeat” symbol on the chord section mean?
8
Are there any typical, practical applications of negative harmony?
3
Negative Harmony
2
Transposing the melody in negative harmony