I have a problem here (Logic Pro X version 10.3.1): I want all my rhythm section tracks (all except guitar in this case) to sound through a wireless speaker iLoud, but I want my guitar to sound through a regular amplifier. How can I do that? Here's a picture: 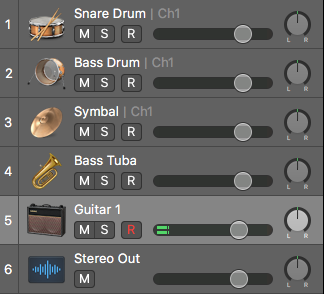 You should be able to route to multiple outputs from Logic Pro by setting up an Aggregate Device using OSX's Audio Midi Setup on your Mac. However, this may still not be an ideal way to practise, as using FX in a DAW such as Logic inevitably introduces some level of latency (delay) to your guitar sound, which can make practising in time difficult. See "Problems when playing live using DAW effects" below. Some people don't mind these latency problems so much; some people find it really difficult to play with this delayed sound (personally, it drives me mad...!)

Setting up an Aggregate Audio Device in OSX

Open Audio MIDI Setup on your Mac. Open the Audio Devices window, most easily by going to Window in the toolbar. Create an Aggregate Device by clicking the "+" sign in the bottom LH corner of the Audio Devices window. Select the two outputs you want to use from this aggregate device. In your case, this will be your Scarlett 2i2 and your bluetooth speaker. In the picture below, you'll see that I've selected a bluetooth speaker (Sound Sq) and my built-in output (as I haven't got my Audio Interface connected to my laptop at the moment). 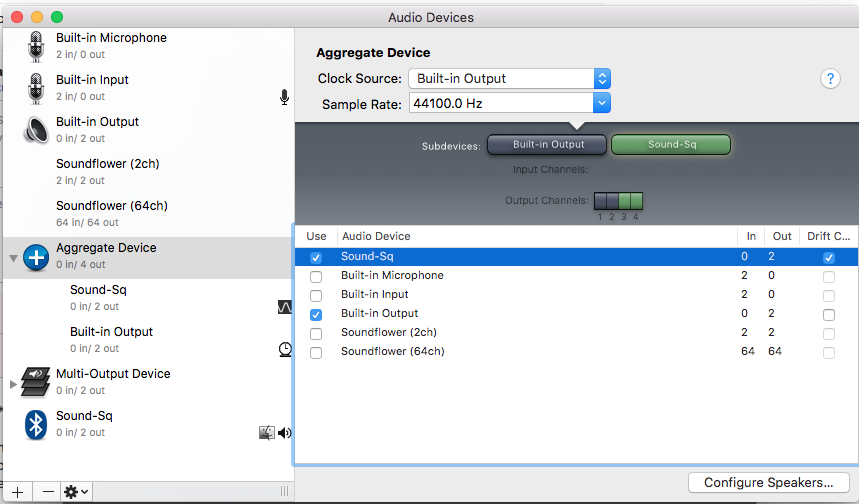 Also, notice that two output channels (i.e. a single stereo output) are assigned to each output device. In this case, 1+2 to the built-in output and 3+4 to the bluetooth speaker.

Open the Preferences pane in Logic Pro, select Audio at the top of this pane, and then select the Devices tab. Change the Output Device to the Aggregate Device you created earlier. Click the Apply Changes button to change to using this output device. 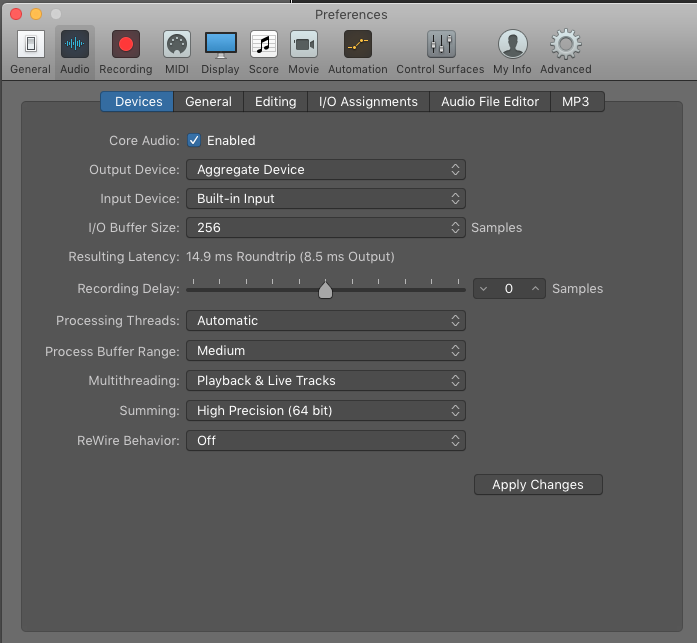 Finally, you need to change your outputs on your channel strips to route them to where you want them to go. You do this by click-holding on the Output button on each channel strip. The easiest way find all the channel strips is in the mixer (opened by pressing X). In the example below, I routed my Drums to the default Stereo Out (which goes to Outputs 1+2, my built-in output) and the Guitar to Output 3+4 (which goes to my bluetooth speaker). 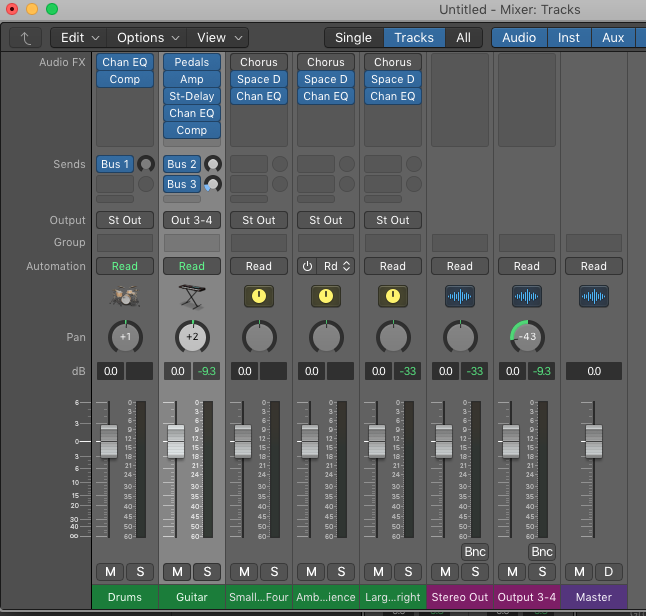 You'll notice this now creates another output channel strip, too. However, I know you said you weren't bothered by delay but... This created an eventual round-trip latency of 204ms when using the bluetooth speaker. (I took the second screenshot above before I connected the bluetooth speaker, which is why it has latency of 15ms shown.) This is a fifth of a second (or an eighth-note at 150bpm) - I certainly couldn't deal with that, but if you can, I salute you sir!

The "delay" you describe will be latency. Latency is most noticeable when using multiple FX (or EQs etc.) For this reason, you would usually not want to use FX in a DAW like Logic while practising. So there is a certain irony here: if you don't need FX on your guitar sound, you won't get so much latency by routing your guitar through Logic, but of course you won't need to put it through Logic anyway, and can just play straight into your amp and route the Logic backing track instruments to your bluetooth speaker. If you do want to use Logic FX for practising, you will usually get a certain amount of latency, and will still have your problems with output routing.

Not the answer you're looking for? Browse other questions tagged recording logic-pro homerecording or ask your own question.

1
How to properly record my guitar over a backing track of a song?
3
Multieffects Pedal to USB Recording Device
1
Using a Mac for backing and recording
1
Sound card for both recording and listening
5
How to retain midi quirks in final recording with Logic Pro
2
Weird sound playing on an backing track in A
1
No sound is coming to focusrite scarlett 2i2 when connected to emulated output of amp
3
Logic: How to disable live microphone playback?
4
How to properly record electric guitar?