Why do unofficial Stratocaster clones have a differently shaped headstock?

I've done a fair bit of shopping for affordable Stratocaster clones. One thing I've noticed is that almost all of the clones I found had a nearly perfect copy of the body, yet the headstock was different in some way. For example, the Behringer iAxe 393 is exactly like a Squier Stratocaster without the ball shape on the end of its headstock. Why do unofficial Stratocaster clones have a differently shaped headstock yet copy the body? Isn't the design of the body the intellectual property of Fender?

The answer is, as Steve said, because Fender considers the visual design of their instruments to be their intellectual property.

Back in the 60's-80's, a large number of Japanese manufacturers such as Ibanez, Greco, Fernandez, Tokai, etc became well-known for making copies of Fender and Gibson guitars, some of them considered by vintage enthusiasts to be of better quality than Fender's own instruments at the time. A few U.S. makers also got in on it. Well, Fender (which was, during at least some of this, owned by media giant CBS) and Gibson (owned by then-music-equipment-giant Norlin Industries) couldn't have that. They rampantly pursued cease-and-desist action, and even lawsuits, against these brands for copyright and trademark infringement, and most of these makers were banned from marketing these "lawsuit guitars" in the U.S.

Some of them joined with the conglommos: Greco Guitars did business as Fender's Japan division, and made "licensed" copies up until the late 80s when the name was spun off to FMIC and the global business was reorganized. To this day, even though Fender now owns their Japan subsidiaries outright, Fender limits the availability of Japanese and high-end Korean models bearing the Fender brand (Squier is of course widely available), to give its more expensive U.S. labor and products a better home market.

Others varied the design enough to avoid further legal action. Yamaha's Pacifica "Strats" have only a master volume and master tone, thus changing the circuit design and the outward appearance. Peavey's Raptor is very similar to the Pacifica, and their T-60 guitar, while outwardly similar in mechanics to a Les Paul, has very different styling as well as circuitry with a built-in coil tap when the tone pots are turned to 10. Ibanez was heavily pursued by Gibson for trademark/copyright infringement, and got around it mostly by going "SuperStrat", producing an entirely new animal that was different enough from both Gibson's and Fender's instruments to be considered its own design. Fender and Gibson in fact found themselves playing catchup, as their traditional Strat (which didn't have enough "oomph" from the single-coil pickups) and Les Paul (generally less comfortable than a Strat due to size and body shape) sales took a nose dive in the face of these cheaper, "metal-ready" instruments developed as a direct result of the very actions they took to suppress their competition. Today Ibanez, Peavey and Yamaha market some very Gibson-like solid-bodies and semi-acoustics that have a distinct enough look and feel to not be called "clones", with the headstocks being a crucial part of that, and the SuperStrat has also gone boutique with U.S. luthiers like PRS producing high-end SuperStrats.

Still others were never pursued for making "copies". The "L" in G&L Guitars is for Leo Fender, who formed this joint venture with longtime collaborator George Fullerton after the success of Music Man, and after seeing what CBS had done to his brand name. He brought the Strat and Tele designs with him, and with only a token change to the headstock began marketing high-end "Legacy" (Strat) and "ASAT" (Tele) guitars in the US and Japan. Fender Inc. has never pursued any action against G&L that I'm aware of, whether under CBS or as FMIC; it would look REALLY bad to sue another Leo-founded company over a design Leo came up with, even if he DID sell the rights to it along with the company. However, I notice you generally won't find G&Ls in the same stores as Fenders (unless one or the other are used), and that's probably based on some supplier contract Fender requires their retailers to sign.

Also as Steve said, enough time has passed, and enough "close-enough" designs have been allowed to be sold, that Fender's hold on the look of the guitar as a trademark has become extremely shaky. It may keep its headstock design as a trademark, but the visual and technical details that make a Strat the player it is are now considered public domain as of the 2009 USTPO ruling.

Fender has always claimed that the shapes of its instruments were their intellectual property. Prudent manufacturers of similar guitars modified enough of the aspects that they wouldn't have to get involved in a legal spat. However, as a side note, Fender put it to the test in 2009 and lost (read here). 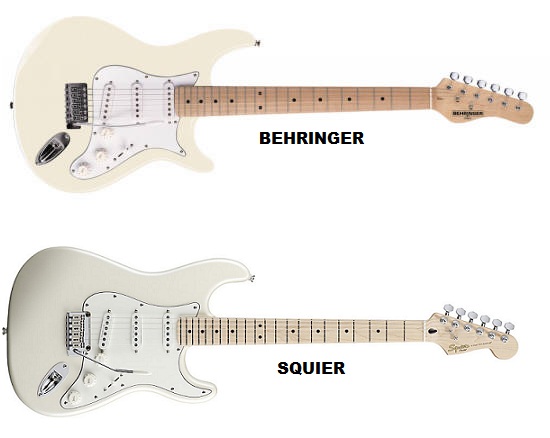 Regarding the differences between the iAxe 393 and the Squier Stratocaster:

There are more differences than just the headstock. The bottom of the body is rounder on the Behringer guitar. The pickguard is shaped differently, the smaller horn isn't as big, etc.

The Behringer guitar is clearly based on the Stratocaster, but it isn't an exact duplicate.

Not the answer you're looking for? Browse other questions tagged electric-guitar stratocaster or ask your own question.