I've heard that there are old books with chord progression charts that tell you which chords are likely/plausible to come after a given chord. A music teacher said there are charts that can get quite large.

One example I know of is Walter Piston's Harmony book, but the chart in the early chapter was quite small, and very basic/diatonic.

I'm not sure about an old chart that shows chord progressions. The ones you might be thinking of are mostly found in new textbooks, like this one from MusicTheory.net:

But you may be interested in Schoenberg's "Chart of Regions" from his Structural Functions of Harmony: 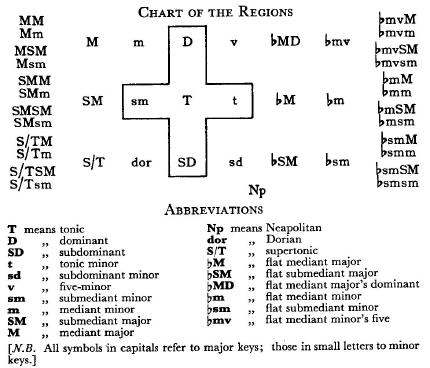 Here's a smaller, minor version of the chart:

And here's a colorized version of the original, almost as a type of heatmap: 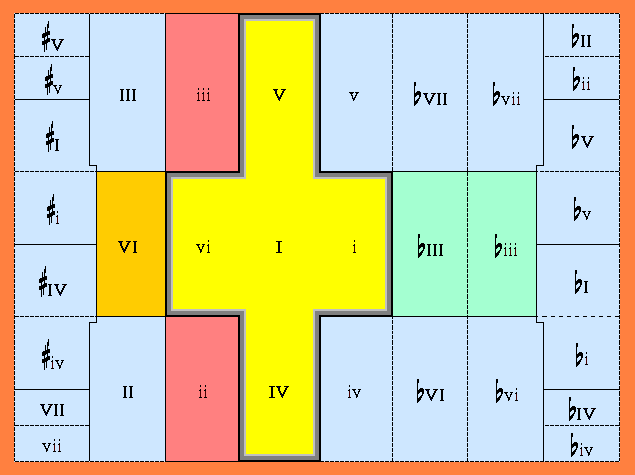 Keep in mind that the charts will change depending on how "old" you mean. If you're looking for a chart with Roman numerals, for instance, you won't get one until at least the 19th century, since it wasn't until Vogler and Weber came along ca. 1800 and began using Roman-numeral notation.

There are other types of geometrical structures that show relationships between chords, like the Tonnetz: 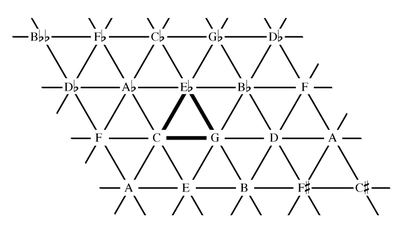 The triangles create triads; the bold triangle C E♭ G, for instance, is a C minor triad. But something like the Tonnetz focuses more on distance between chords than on actually creating harmonic progressions. But the Tonnetz does lead towards something we call neo-Riemannian theory, where the notion of progression (through "transformations" like P, L, and R) is something a bit different: 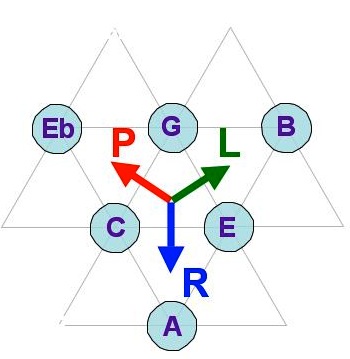 10
How do I interpret this chord progression chart?
3
What does Schoenberg mean by “intermediary region”?

7
Why do the Canadian and American ways of writing chords symbols differ?
4
Book about development of music
9
Is there any theory to decide a set of plausible chords per measure where a whole melody of a song is given?
2
Chord progression template
1
How do I manage internalizing foundation for chords, scales, hamonies and voicing
0
How to put chords (POP-EDM) under a given lead vocal melody (starting from a good knowledge in music theory)
1
Film Scoring non-diatonic chord changes. Any good books?
2
Possible to learn harmony by ear?
2
Is there a formal term for the “WWHW” and “WHWW” ordering of intervals in a perfect 5th?
2
Dissonances with bass versus in upper voices. 4-part harmony