How Is This a Dominant 7th Chord? 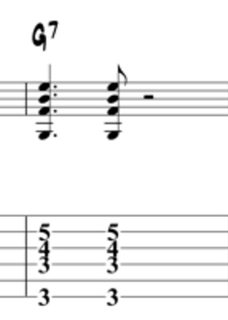 The voicing in question is commonly notated as a G13 chord in jazz sheet music, and in compendiums of guitar chords for jazz. Jazz guitarists frequently leave some notes out of chord voicings; this is sometimes necessary given the nature of the fingerboard, but it is also sometimes desirable to leave space for other players to fill in. The fifth of a chord is often the first to go, since it doesn't contribute to chord quality unless it is augmented or diminished. Note that the G13 voicing shown still contains the guide tones.

Often changes for jazz tunes are written with simple chords to allow players to choose how to embellish. This could explain why G7 becomes G13 in the tabulature: the G13 still functions as a dominant seventh chord, as it contains the major third and the minor seventh.

Another voicing that I am fond of moves the root of the chord to the first string; that is, fourth string at 3, third string at 4, second string at 5, first string at 3. This is a G13 in third inversion. It has a tritone between the lowest two notes, and sounds a little more tense to me.

It is possible to play a fuller thirteenth chord voicing on the guitar. For example, you can play the sixth string at 3, fifth string at 2, fourth string at 3, and barre the third, second and first strings at 5. This requires a bit of a stretch, and you may find it easier to play higher on the neck; it gives a G13 (omitting the fifth) with the ninth, eleventh and thirteenth.

G7+6 makes it sound like an augmented chord with the sixth mixed in there.

The fifth of this chord, D, is incredibly boring and really has no use in establishing its sound.

The G7 symbol over top the notes should probably be crossed out and written as G13.

Aside from that small correction, yes, this is basically common practice in jazz and should raise no eyebrows.

Also, guitar parts in certain charts are often not done well as the arranger doesn't always have practical knowledge of the instrument.

To really understand the guitar's rhythmic role, listen to Freddie Green with the Count Basie Orchestra... Check out this video on YouTube:

Yes this is a common jazz voicing for G13. In Jazz it can be common, or not, to include the lower extensions in a higher extension 7th chord. So a G13 might include the 9th and 11th, or not. If you want cool, try first finger F on 4th string 3rd fret, second finger B on third string 4th fret and third finger E on second string 5th fret. Nothing else. No G. Repeat, No G. That is a way cool G13.

The straight forward answer is the major 3rd and minor 7th over the root of G make the chord a dominant 7th.

The E in the staff/tab is then the next concern. It's a little ambiguous, but that particular chord symbol and notation seem to indicate the E is an optional choice otherwise the symbol G13 should have been used to indicate the E was required.

It's interesting that while chord symbols in jazz are considered to give requirements where essential chord tones should not be omitted, there doesn't seem to be a problem with extending simple 7th chords from a lead sheet depending on the style of interpretation.

I've seen lots of cases for piano where a lead sheet gives simple 7th chords, but the interpretation could use rootless "Evans" chords with extended 9ths and 13ths.

Also, those rootless Evans chords omit the roots and do not include 11ths even when a 13th is used. So there can be a lot of flexibility with omissions and extensions when the given chord symbol is a simple 7th chord.

Not the answer you're looking for? Browse other questions tagged guitar chords notation jazz or ask your own question.